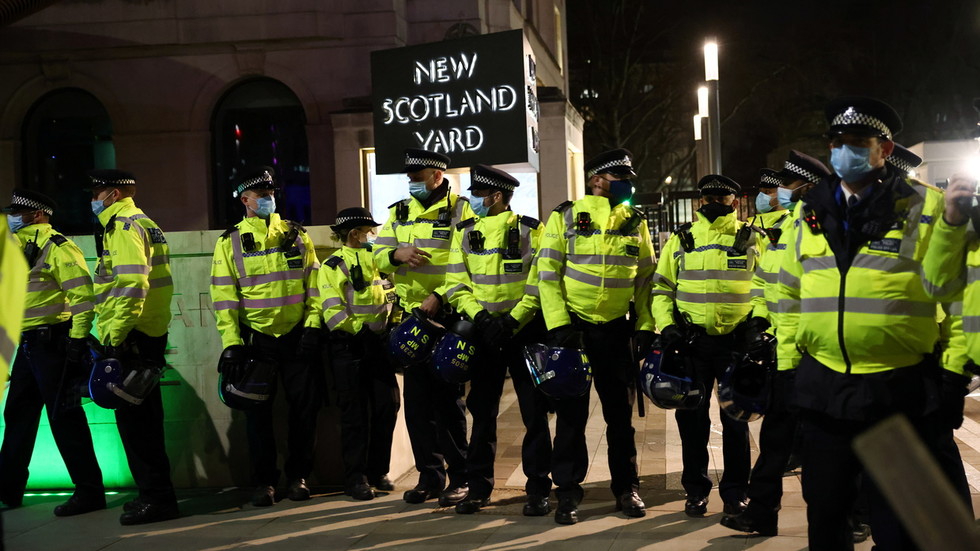 The British government failed to make it clear that protests were still permissible under Covid-19 restrictions and confused both the public and the police on the issue, a parliamentary committee has concluded.
The restrictions on gatherings introduced by the government during the pandemic have been “confusing” and ambiguous, the parliament’s Joint Committee on Human Rights said in a statement on Friday, adding that protests have never been “completely illegal” even during lockdown if held properly.

The “confusing” nature of the government regulations has left the public “unsure of their rights and at risk of arbitrary or discriminatory decision-making,” the statement said. The government imposed a general ban on gatherings but failed to make protests an exemption from this rule – in a move that the committee argued violated the 1998 Human Rights Act and the European Convention of Human Rights.

“The law on the right to protest during the pandemic has been a mess and the right to protest has not been protected,” the committee’s head, Harriet Harman, said. The lawmakers looked into how different protests in the UK unfolded since the government started imposing restrictions due to the Covid-19 epidemic.

The UK has seen quite a number of high-profile rallies last year, including the Black Lives Matter protests, demonstrations by defenders of monuments targeted by iconoclasts as well as marches against national lockdowns.

Most recently, the Reclaim These Streets movement organized a number of vigils in commemoration of Sarah Everard, a victim of apparent kidnapping and murder. One such event in the Clapham Common area of London, where Everard went missing, ended up in clashes with police after UK law enforcement deemed it illegal under the current rules.

The incident sparked public outrage and led to another rally outside of New Scotland Yard as well as calls for Metropolitan Police Commissioner Cressida Dick to resign. The commissioner herself maintained her position that “unlawful gatherings are unlawful gatherings,” adding that she did not consider resigning.

The parliamentary committee blamed the developments on the government. “The events of last weekend show clearly how the lack of clarity and level of uncertainty in the law is unacceptable and must be remedied as a matter of urgency,” Harman said.

The committee also drafted some amendments to the regulations that would “guarantee the right to protest in public outdoor places, if done safely” by putting it on the same footing as picketing and communal worship.

Earlier, a legal complaint filed by those seeking to make organized vigils permissible under lockdown was defeated in the High Court, which ruled it was up to the police to decide whether the right to protest clashes with the broader public health considerations and a ban on mass gatherings amid the pandemic.

The UK government has so far not reacted to the parliamentary committee’s statement.
#COVID-19  #Covid
Add Comment