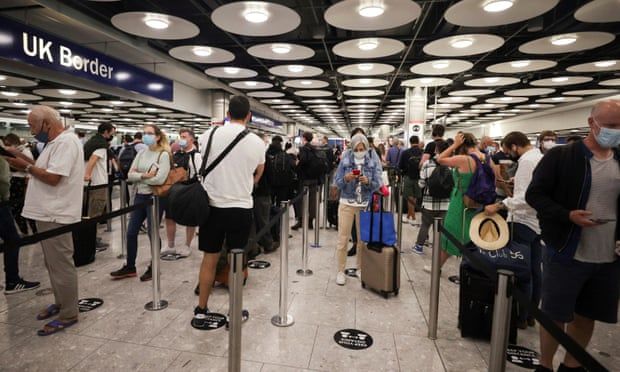 Labour and medical experts question reliance on vaccination status and tests for arrivals from Europe, the US and elsewhere

Opening England’s borders to let millions of people arriving from the US and Europe avoid quarantine could risk importations of new Covid variants that might wreak havoc with unlocking domestic restrictions, ministers have been warned.

After the government announced plans to recognise vaccination status if people were fully jabbed in the US and most of Europe, Labour said it could make the country more susceptible to being overwhelmed by another Delta-like variant.

The change, which will come into force from next Monday, was signed off by members of the cabinet on Wednesday in a move to let Britons who moved abroad be reunited with family back home, and to unlock more business travel to boost the economy.

Many millions of people are set to benefit across all of the US, in all 27 EU member states (apart from France, which is being kept on the “amber plus” list for another week) and in Norway, Iceland, Switzerland and the microstates of Lichtenstein, Monaco, Andorra and Vatican City.

All arrivals will still have to test negative before their trip and again within two days of landing in the UK. Children who mainly reside in the US and Europe will also be able to avoid quarantine.

Europeans will need to produce their digital Covid certificate, while Americans who do not have an app should show the Centers for Disease Control card they were given when vaccinated.

The move was welcomed by aviation and tourism firms, the news adding nearly £2bn to their value. But one industry body admitted the summer season was already all but lost, and another claimed the lack of a reciprocal deal to get the US to ease restrictions on its side of the Atlantic was a significant stumbling block.

Scotland announced it would follow suit but keep the situation “under close review”, while the first minister for Wales, Mark Drakeford, gave reluctant backing to the change. He said that for practical reasons it would be hard not to go along with it but that politicians in Westminster were “making decisions that we probably wouldn’t have made for ourselves”. He repeated that he thought people should avoid going abroad this year.

Jim McMahon, the shadow transport secretary, criticised ministers’ “recklessness” and said evidence needed to be published proving the move would not lead to another variant running “rampant through the country” and damaging “the effort of the British public”.

Alexandre Holroyd, the deputy in the National Assembly representing French citizens in northern Europe, called the decision to exclude travellers from his country absurd, tweeting: “Decisions made without any science or logic. Kafka goes on holiday with Godot.” 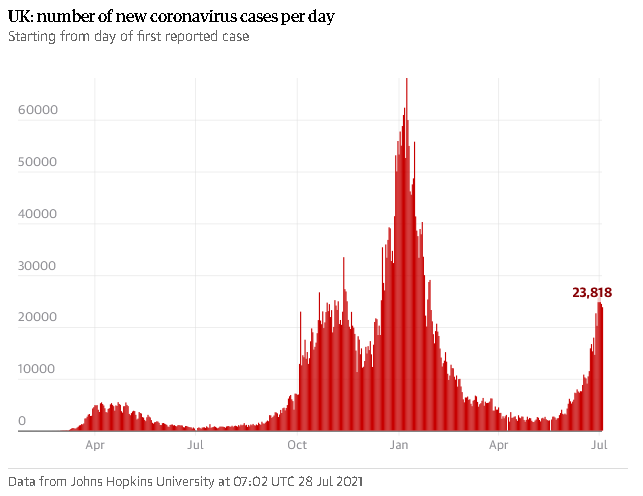 Meanwhile the number of new Covid cases in the UK rose by more than 4,000 – putting to an end the seven-day streak of falling figures that had given ministers and their advisers cause for optimism.

Daily deaths in the UK dropped by 40 to 91 and hospitalisations continued growing but at a slower rate to 6,021.

The prime minister, Boris Johnson, tried to lower expectations by saying people should remain cautious and forecast that there would “still be bumps on the road” later this year.

Scientists were split about the level of threat from the government’s decision to allow significantly more people into the country without quarantining.

Prof Christina Pagel, director of the clinical operational research unit at UCL, said given that fully vaccinated people could still catch and pass on the virus, she was worried about variants that were better at infecting people who were already vaccinated.

She said a “worrying new variant could emerge” in the US or Europe; or if travel were less inhibited between those places and the UK “a variant that emerges anywhere will spread everywhere”.

Pagel said: “We should be taking advantage of the fact that we are an island and having much more control over potential new variants coming in.”

Sir John Bell, regius professor of medicine at Oxford University, told the BBC it was “self-indulgent” for the government to be focusing on what freedom to give to fully vaccinated people while the vast majority of people in some poorer countries did not have access to jabs.

He pressured the government to increase the number of doses it was sending abroad, saying: “If you want variants, you’ve got the perfect storm for that, and it is not in Watford – it is in Zimbabwe and Rwanda and South Africa.”

But Prof Ravi Gupta, a clinical microbiologist at the University of Cambridge, said there were “much more worrying conditions here in the UK” for variants that could escape current vaccines, adding it was “sensible” to allow fully vaccinated travellers in with no quarantine, given the lack of legal restrictions now in place.

Paul Hunter, professor of medicine at the University of East Anglia, also said the UK had recently “been more of a risk to others than they have been to us” and that while new variants were concerning, travel restrictions only delayed their arrival rather than stopped them.

The transport secretary, Grant Shapps, insisted it was safe to open up the border. He also announced that international cruises would soon be allowed to resume and that testing requirements would be relaxed for delivery drivers who entered the country but do not leave their vehicle.

But Croft said businesses dependent on foreign visitors still faced “substantial barriers to recovery”, with other countries reopening faster and the US still advising its citizens not to travel to the UK. “The valuable 2021 summer season is all but lost”, he said, and it would mean thousands of businesses and jobs continuing to be at risk over the winter.

The travel association ABTA warned that the aviation industry was also “not out of the woods”. A spokesperson for the group said other countries were reopening faster than the UK, and urged the government to add more destinations to the green list, which is due to be reviewed next Wednesday with changes coming into effect from 9 August.