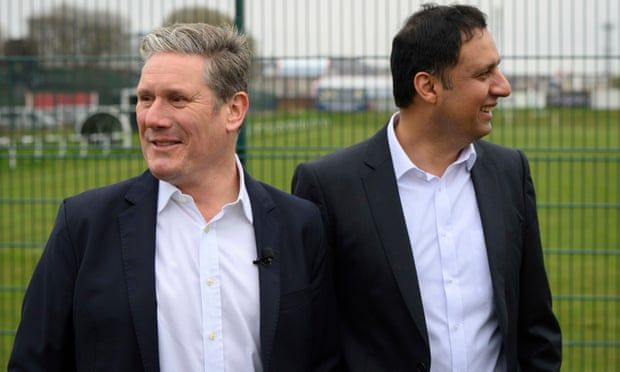 Exclusive: Party leader to rule out talks with nationalists in attempt to spike Tory ‘coalition of chaos’ attacks
Keir Starmer will vow Labour will never deal with the Scottish National party and make it explicit his party would go into minority government rather than enter talks with nationalists, in a new effort to spike Conservative attacks on a “coalition of chaos”.

The Labour leader is expected to ramp up his pledge that the party would give no quarter to the SNP and would not grant an independence referendum, which will form part of his summer campaign.

That position would effectively dare the SNP to vote down a Labour Queen’s speech and bear responsibility for bringing down a Labour prime minister and enabling another Tory administration.

Starmer is likely to offer a procedural guarantee against any deal, including a motion to the party’s conference. That commitment would demonstrate Labour members were onboard with the strategy, sources said.

Senior figures around Starmer have been urging him to make the case in stronger terms to voters, especially those in England. “We must be louder making this argument,” one strategist said.

They argue it would pull the rug from under a key Conservative attack line before it is established, drawing comparisons with how the party leader has dealt with antisemitism and his association with the Jeremy Corbyn years.

The Scottish Labour leader, Anas Sarwar, will give his own speech to the Fabian Society on Monday taking the same hard line, followed by a series of meetings at shadow cabinet and with MPs to firm up the party’s strategy.

“Keir does not take any persuading to be hardline on this stuff,” one senior ally said. “He implicitly understands what a threat it is not just to the success for the party in Scotland but also how effective those attacks can be in England.”

Arguments that Labour cannot form a majority on current polling and would be dependent on SNP support are likely to form a key plank of the Tories’ attack at the next election – including against the Lib Dems.

Writing in the Daily Mail this week, the former cabinet minister Matt Hancock, who is rumoured to be making an attempt to be the new Conservative party chair, rehearsed the attack line on a Labour deal with Scottish nationalists.

He said: “Almost the only viable alternative to a Conservative government is a coalition between Sir Keir and Nicola Sturgeon’s separatist SNP … the risk of a grubby coalition deal that sells the union down the river.”

Labour MPs in England have become increasingly concerned about the viability of Tory attacks highlighting a potential coalition deal.

The shadow Scottish secretary, Ian Murray, said it was vital voters heard an unequivocal message. “If the SNP want to vote with the Tories to bring down a future Labour government, as they did in 1979 to usher in 18 years of Thatcher, then that would be their choice,” he said.

“The Tories want to run these fake scaremongering campaigns, as they did in ‘15, ‘17 and ’19 because they have a dead duck leader and nothing to offer the people of this country.”

Labour strategists say the party must also hammer home the message to its own supporters about the danger of association – including the idea that the SNP could form any part of a progressive alliance. “There are parts of the party who still think we are on the same side,” one senior Scottish Labour source said.

Sarwar has already taken a hard line on blocking deals with the SNP: before May’s council elections he vetoed Labour coalitions, which forced local leaders to form minority administrations by doing deals with other parties.

That meant Labour lost power in Aberdeen but formed multiple minority administrations including in Edinburgh, East Renfrewshire, and Fife – which has caused internal tensions. In Edinburgh this week, Labour suspended two councillors who refused to vote for a minority deal that gave two committee posts to Tories in return.

Labour MPs have been enthusiastic about Sarwar’s leadership and the Scottish leader will address MPs at a parliamentary Labour party meeting this week. Sources close to Sarwar said it had raised more funding from private donors than the UK party, spending about £1m on last year’s Holyrood elections, and self-financed its election campaign in May by raising £100,000.

Key figures around Starmer acknowledge the Scottish party will take some different policy paths to the UK party, though they are likely to be difficult to navigate through this. Sarwar visited striking workers on picket lines this week, something banned by Starmer for his MPs.

The Scottish party is also keen to take a much more liberal approach to closer relations with the EU – which some in the party believe could cause difficulties with the national approach.

So far there has only been one major clash – an almost farcical row over changing the Scottish party logo to a thistle to which senior figures in Labour HQ objected. The change has forced a convoluted process with the Electoral Commission to alter the official logo.

However, there are likely to be further tensions over Labour’s approach to constitutional reform in the UK, spearheaded by a strategy from Gordon Brown.

That is now expected to be delayed – perhaps even until September. Brown’s interim strategy was presented to the shadow cabinet before Easter but it divided opinion among shadow ministers – some of whom were dissatisfied with how the proposed settlement would affect English regions.
Add Comment