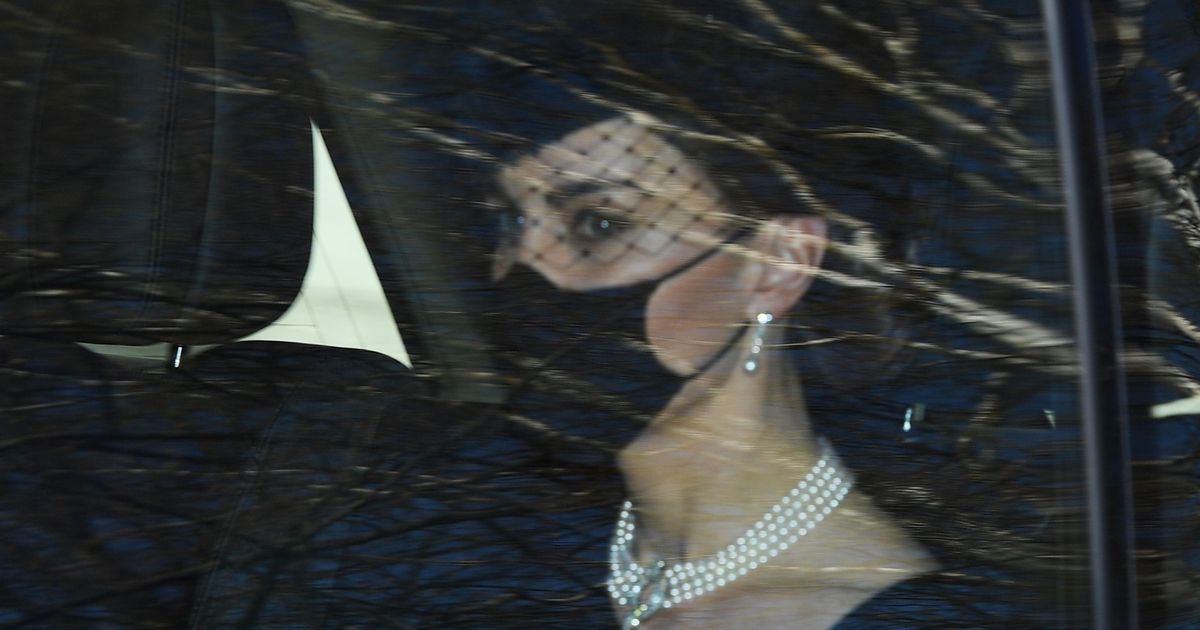 The Duchess of Cambridge cut a sombre figure arriving for the funeral of Prince Philip, who she was known to have a special bond with prior to his death on the morning of April 9

Kate Middleton struck a sombre figure as she arrived at Windsor Castle for Prince Philip's funeral.

The Duchess of Cambridge was one of the thirty mourners saying their final goodbyes to the Duke of Edinburgh.

Her demure outfit consists of a black face mask, a black dress and a black fascinator, punctuated by simple pearl earrings and a quadruple-strand pearl necklace.

Kate was seen speaking with Prince Harry after the funeral - a deeply moving service which had the Queen sit alone due to Covid restrictions. 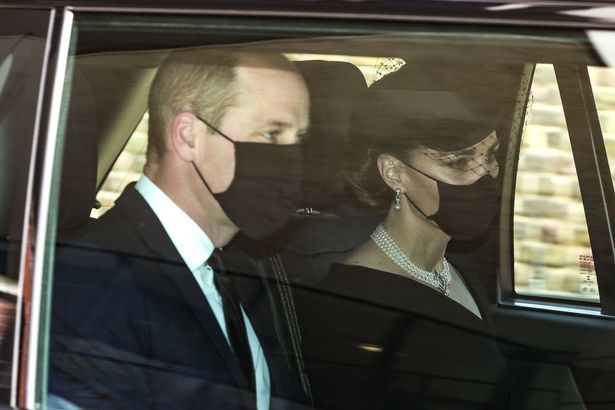 Prince William and his wife Kate arrived together

The Duke of Sussex appeared to be smiling beneath his face mask as he spoke with his sister-in-law.

Moments later William and Harry found themselves walking at each others side away from the Chapel.

Kate seemed to slip away from the pair, giving them space after many months apart to talk. 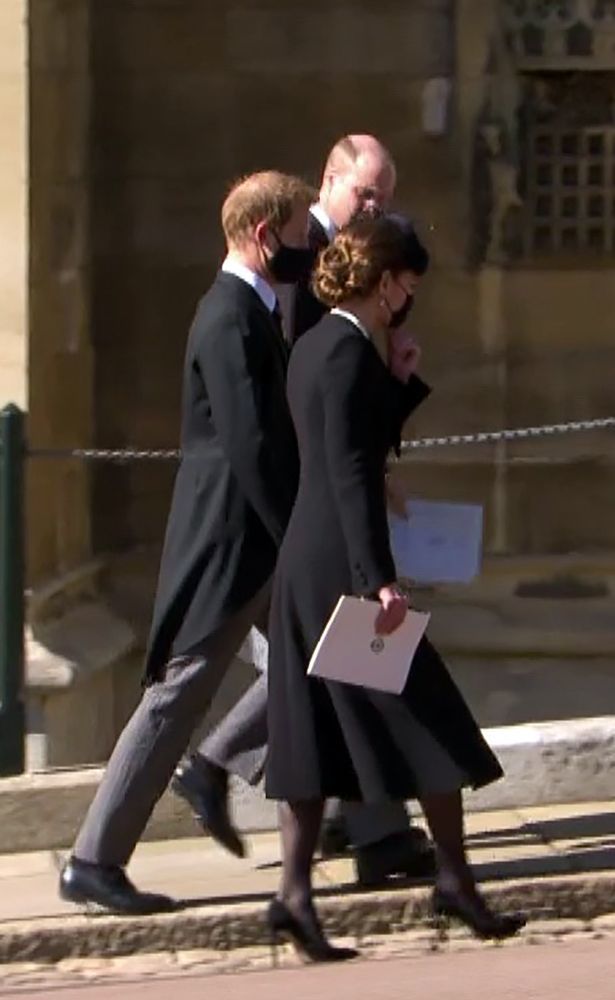 Harry and William found themselves walking besides one another 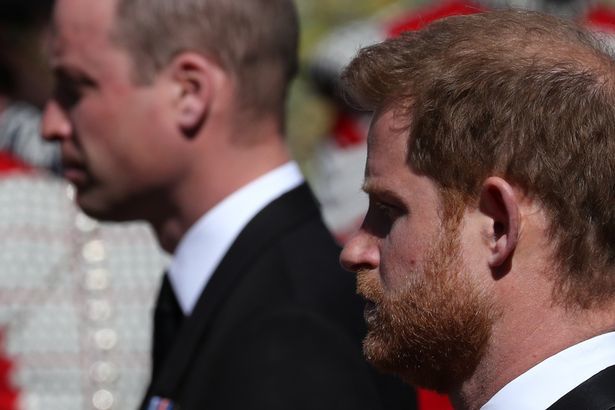 Prince William and Harry look on during the funeral

Although separated in age by six decades, Philip and Kate were said to have shared a special bond as well as a similar sense of humour and devotion to duty.

They often stood close to each other when the royals gathered on the Buckingham Palace balcony for Trooping of the Colour, and could be seen exchanging jokes on several occasions.

In one particularly touching photo the Duchess of Cambridge was seen laughing uproariously at a comment made by Philip. 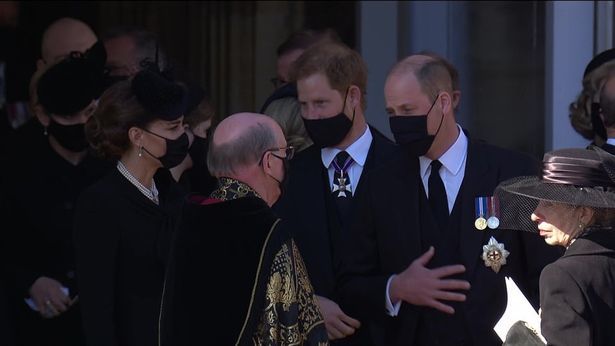 William, Kate and Harry after the service 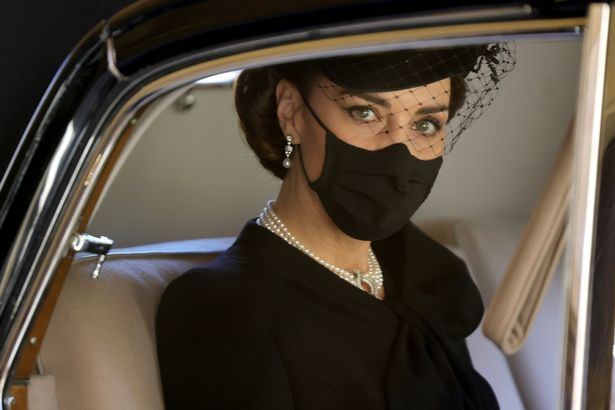 Kate arriving in her funeral attire

When Prince William paid tribute to the Queen's husband following his death he made sure to note the bond his wife and grandfather shared.

"I will always be grateful that my wife had so many years to get to know my grandfather and for the kindness he showed her," he wrote. 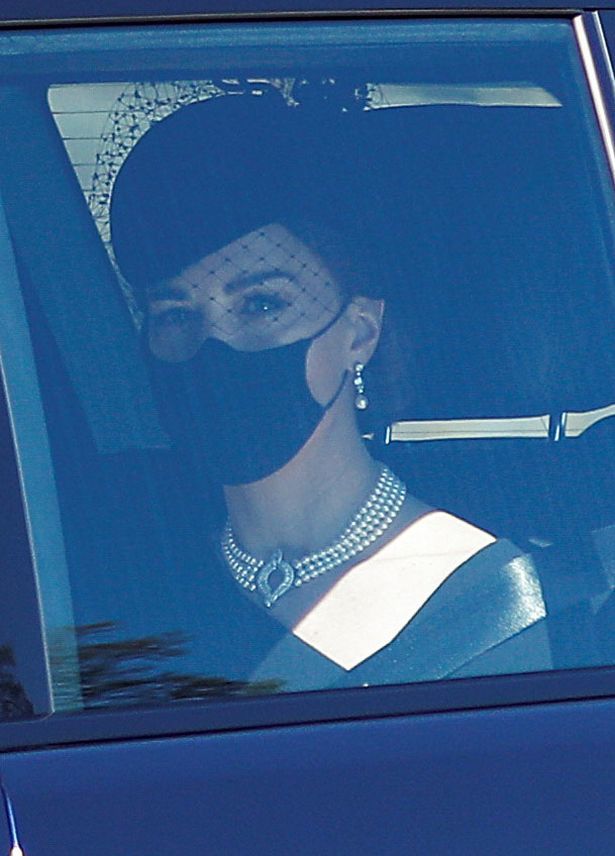 Kate arrived at the service clad in a face mask 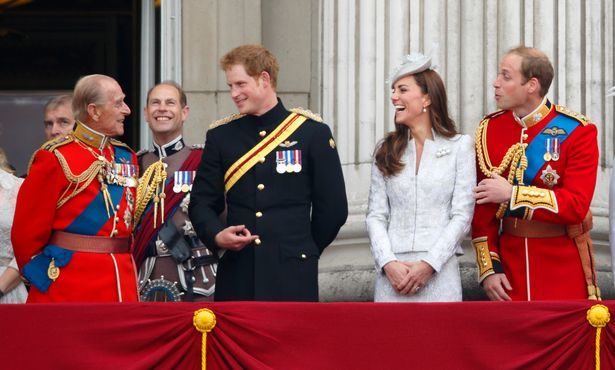 Philip is said to have really liked Kate

Kate also had a sweet connection to her future grandfather-in-law years before meeting William, as she completed her Duke of Edinburgh Award.

Work-wise, Kate joined Philip and the Queen for a day of royal engagements in Leicester back in 2012.

The trio travelled to the city on the Royal Train, which means they spent the evening before together. 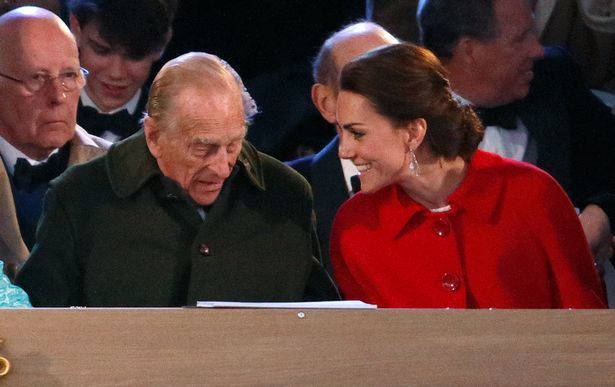 They often sat together at events 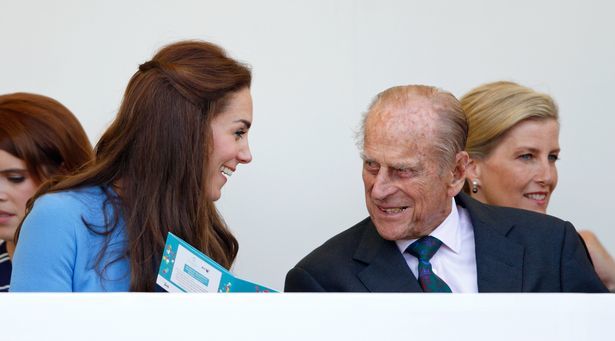 Kate and Philip shared a moment on the Queen's 90th birthday

Kate and Philip seemed to be enjoying each others company, chatting and joking throughout. The Duchess told one well-wisher "I'm being well looked after".

William and Kate are representing the Cambridges at the funeral today, with Prince George, Princess Charlotte and Prince Louis not on the guest list.
A particularly moving moment for

the couple may come ahead of the funeral service beginning when the chapel's organist Luke Bond begins to play.

Among several pieces he will perform is Vaughn William's Rhosymedre, which also formed a part of William and Kate's weddings, as well as Harry's ceremony and Diana's funeral.