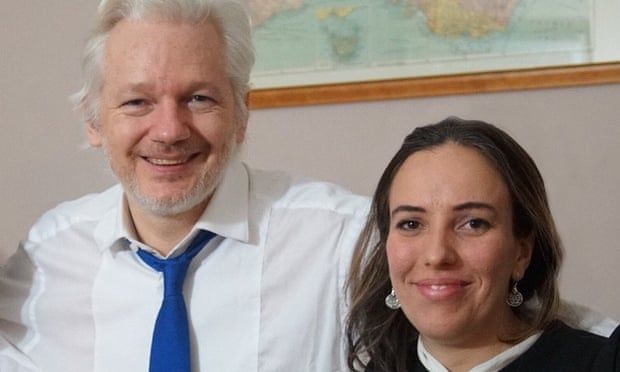 WikiLeaks founder will tie the knot with Stella Moris on 23 March, wearing a kilt designed by Vivienne Westwood

The WikiLeaks founder Julian Assange will get married in Belmarsh prison on 23 March, with just four guests allowed to attend.

Vivienne Westwood is designing a wedding dress for the 50-year-old’s fiancee, the lawyer Stella Moris, and a kilt for Assange, whose parents have links to Scotland. The designer has been a staunch supporter of Assange.

Moris, who met Assange when he was living in London’s Ecuadorian embassy seeking political asylum, will marry the WikiLeaks founder in the high-security jail nearly three years after his arrest. The couple have two children.

Moris, who spoke to her fiance on Sunday, told the PA news agency they were both “very excited” despite restrictions on the ceremony.

She said they were waiting to hear if they are permitted a photographer, and that guests would have to leave immediately afterwards, despite the marriage taking place during normal visiting hours.

“Obviously we are very excited, even though the circumstances are very restrictive,” she said.

“There continues to be unjustified interference in our plans. Having a photographer for an hour is not an unreasonable request.”

Two witnesses will also be allowed, along with two security guards.

“Julian is looking forward to the wedding because it is finally happening, many months after we first made the request,” Moris added.

“He is being held on behalf of a foreign power and has not been charged with anything, which is completely disgraceful.”

Assange, an Australian citizen, was arrested after spending more than six years in the Ecuadorian embassy while he fought to avoid extradition to Sweden, after WikiLeaks’ publication of hundreds of thousands of leaked documents relating to the Afghanistan and Iraq wars.

In January, he won the first stage of an appeal to fight extradition to the United States, where he faces espionage charges.

Prisoners are entitled to apply to be married in prison under the Marriages Act 1983.