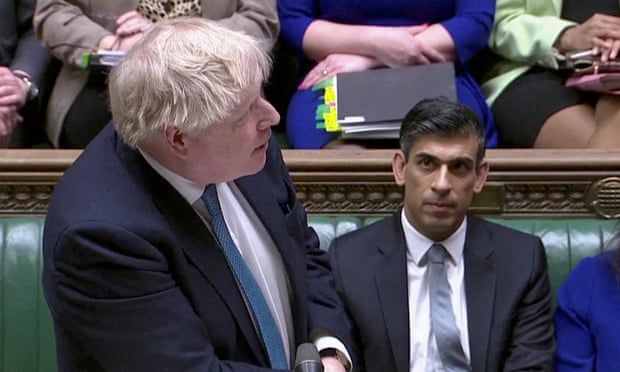 Johnson to ‘bet big’ on nuclear energy despite Sunak’s reservations

The prime minister is determined to press ahead with plans to build up to eight new nuclear power stations even though the chancellor has concerns about the cost, projected to reach more than £13bn.

It is understood the energy strategy, expected to be announced next week, is likely to contain targets for nuclear but will not put a figure on the cost.

Johnson will also commit to a “stretching” target on offshore wind, according to a Whitehall source. But he is now said to be less enthusiastic about the possibilities of onshore wind in England, believing Scotland offers a better landscape for new turbines.

One ally of the prime minister said he would “not really [be] pushing for onshore wind in England” although it would “be in the strategy as an option where people want it, which realistically means in Scotland”.

Johnson and Sunak are understood to have discussed the new strategy this week, which was commissioned to ensure security of supply amid soaring gas prices fuelled by Russia’s invasion of Ukraine. The document was delayed owing to a row over the scale of its ambitions on nuclear, but is now likely to be published at the end of next week.

Sunak will be in London for the launch of the strategy. However, he is reported to be going on holiday in California, where he has a second home, at some point over parliamentary recess, despite rising pressure over the lack of measures to help with the cost of living and energy bills in the spring statement.

The Treasury is understood to have concerns about expanding nuclear power in the UK, with the cost of new plants due to be loaded on to people’s energy bills under the fresh funding system. The government would also be likely to take minority stakes in new projects, and has set aside an estimated £1.7bn on getting one plant, Sizewell C, in a position to go ahead.

But with a renewed focus on weaning the UK off gas, Johnson is insistent on the need to press ahead with new plants, with a draft target of around 16GW of nuclear power in the medium term and closer to 30GW in the longer term. According to the government’s own impact assessment, it takes on average 13 to 17 years from initial investment to electricity being generated by a new nuclear plant.

On onshore wind, allies of No 10 had described Johnson as “open-minded”, but “passionate about offshore”. He appears to have cooled on the prospect of more onshore wind, as well as the potential for fracking in England, because Tory MPs are resisting developments in their constituencies.

The idea of giving communities discounts on their energy bills if they accept onshore developments in their areas has been mooted, meaning the prospect of new developments is “not impossible”, but still difficult, sources said.

However, Johnson has been giving out mixed messages on onshore wind after telling a group of industry leaders this week that he was “horrified” how long the planning process takes. He was told that a wind turbine can be put up in a day, but planning permission can take a decade.

Officials expect No 10 will approve an energy bill to set targets and strategy for energy security, to be announced in the Queen’s speech in May.

The UK has struggled to build new nuclear power stations in recent decades, with the Japanese conglomerate Hitachi in 2020 pulling out of plans to build a new reactor at Wylfa, north Wales, and a move against allowing Chinese investment in Sizewell C on the Suffolk coast.
#Boris Johnson  #Johnson
Add Comment