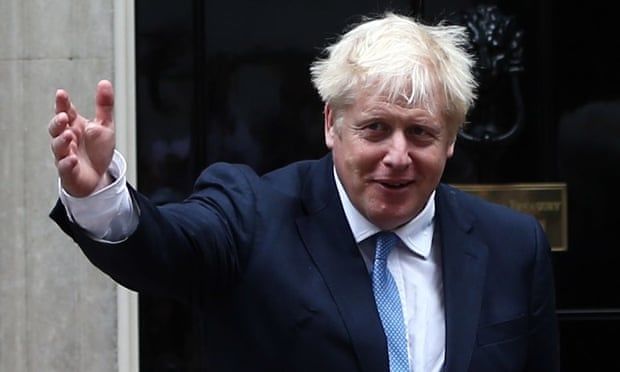 ‘Levelling up’ British society will take 10 years, the prime minister writes as Tories slip in polls
Reports that Boris Johnson has ambitions for another decade in power as he aims to outlast Margaret Thatcher’s 11-year tenure in No 10 have been met with consternation.

The Times reported that Johnson wanted to build a legacy. One cabinet member reportedly told the newspaper: “Boris will want to go on and on. The stuff Dom [Dominic Cummings] was saying about him going off into the sunset was nonsense. He’s very competitive. He wants to go on for longer than Thatcher.”

Cummings, Johnson’s former chief adviser, had said Johnson planned to step down two years after the next general election, to “make money and have fun”.

Johnson shared his pitch for the 2024 election in a piece published in the Times, saying Conservative plans to “level up” British society would take 10 years. The oft-repeated promise has been criticised by an all-party group of MPs as lacking definition and coordination.

With echoes of the 2019 election, during which the Conservatives’ mantra was “get Brexit done”, Johnson looks likely to frame the next election around Britain’s relationship with the European Union. In an extract from an upcoming book by FT journalist Sebastian Payne, the Times quotes Johnson as saying the UK would “slump back” into following the bloc’s regulations under a Labour government.

News of the prime minister’s optimistic vision for extending his tenure follows a slip in the polls after the government announced a manifesto-breaking tax hike. A YouGov poll showed support for the Tories fall five points to 33%, while Labour rose by one point to 35%, putting the party ahead of the government for the first time since January.

The Scottish National party’s Westminster leader Ian Blackford used the prime minister’s hopes for another decade in power to emphasise his party’s bid for Scottish independence, saying it was “the only way to keep Scotland safe from the long-term damage of Tory cuts, and 10 more years of Boris Johnson”. He said the prime minister had “inflicted long-term harm on Scotland”, listing the costs of Brexit, cuts to universal credit and the rise in national insurance contributions.

The Labour and Co-operative MP for Huddersfield, Barry Sheerman, also voiced his concern at the idea of another 10 years of Johnson in power, tweeting: “All those of us who believe in decent honest principled politics had better do something to thwart this ambition.”

A Labour spokesperson said: “We would remind Conservatives that it is the public who get to choose how long the prime minister serves.”

The Conservative party’s fall in the polls follows the government’s decision to push through a 1.25% increase in national insurance contributions, which will be levied on employers and employees to fund health and social care, breaking the party’s 2019 manifesto commitment not to raise VAT, income tax or national insurance. Johnson acknowledged that the move broke the pledge, defending the decision by saying “a global pandemic wasn’t in our manifesto either”.

Labour opposed the national insurance rise. The shadow chancellor, Rachel Reeves, said it placed the cost on younger working people while those who “get their income from financial assets, stocks and shares” face no additional tax burden. Keir Starmer highlighted how the plans would lead to workers shouldering the cost: “Johnson’s tax rise means a landlord who owns and rents out dozens of properties won’t pay a penny more, but the tenants working in full-time jobs will. They are hitting young and low-paid workers while leaving the wealthy untouched.”

The Institute for Fiscal Studies has also warned that “an ever-growing NHS budget could swallow up all of this week’s tax rise, leaving little for social care”.
#Boris Johnson  #Johnson
Add Comment