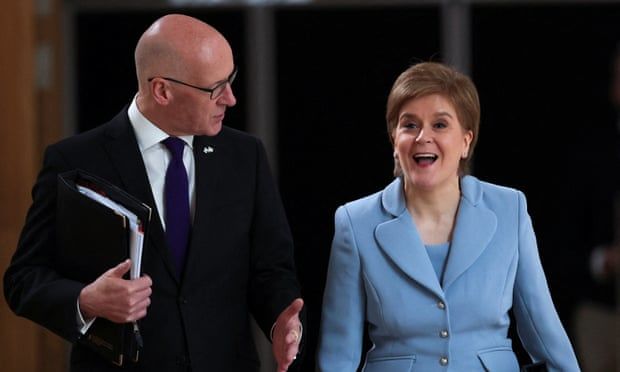 John Swinney, Scotland’s deputy first minister, has issued a correction after sowing confusion over the Scottish government’s claims it could win a mandate for independence at the next general election.

Swinney told the BBC on Wednesday morning the Scottish National party needed only to win a majority of Scotland’s Westminster seats at the next election to have a mandate to negotiate independence with the UK government.

Asked in a BBC Radio Scotland interview whether a simple majority of Westminster seats would secure a mandate to negotiate independence, Swinney said: “That’s correct.”

But, speaking to BBC Breakfast on Wednesday morning soon after Swinney’s interview, Nicola Sturgeon said the SNP needed a majority of all the votes cast in Scotland to secure that mandate – directly contradicting her deputy.

“Of course as a matter of principle, Scotland will only become independent when a majority vote for it,” the first minister said.

On Tuesday Sturgeon told Holyrood that if necessary she would fight the next general election as if it were a “de facto referendum”, to force the UK government to negotiate.

Swinney issued a tweet two hours later retracting his earlier comments. He said he had misheard the question, adding: “Referenda, including de facto referenda at a UK General Election, are won with a majority of votes. Nothing else.”

This issue has become a central part of Sturgeon’s new strategy to secure independence, which she set out in a lengthy statement at Holyrood on Tuesday afternoon.

She told MSPs her primary goal was to win legal authority from the UK supreme court to stage a fresh independence referendum on 19 October 2023, without the UK government’s approval.

In a politically risky move, Sturgeon said the lord advocate, Dorothy Bain QC, had asked the court to convene a hearing as soon as possible on whether Holyrood had the powers on its own to legislate to hold that referendum.

Constitutional experts believe the supreme court will rule that this is out of bounds because the UK’s constitution is a topic reserved to Westminster. The UK government confirmed on Tuesday that it would not authorise one.

Sturgeon said that if the court ruled Holyrood did not have the powers to stage the referendum without Westminster’s approval, she would fight the election on the question put to voters in the 2014 independence referendum, of whether Scotland should be an independent country.

“If the law says that [a Holyrood-led referendum] is not possible, the general election will be a de facto referendum. Either way, the people of Scotland will have their say,” she said. In the 2015 general election, the SNP took 49.97% of the vote and nearly every seat.

Sarah Boyack, Scottish Labour’s constitution spokesperson, said: “This desperate claim from John Swinney exposes the SNP for what they are – obsessive nationalists who are hell-bent on gaming the electorate to suit their ends.

“It is deeply embarrassing for Nicola Sturgeon to be so publicly contradicted on the barometer for independence by her own deputy.”

Ciaran Martin, a former UK civil servant who helped negotiate the terms of the 2014 referendum and who is now a professor at the Blavatnik school of government at Oxford University, said a supreme court ruling was Sturgeon’s “best chance” of securing a referendum.

However, Lord Sumption, a former supreme court judge, told the BBC the court would focus solely on the law. “It’s actually a very difficult course that Nicola Sturgeon has charted for herself,” he said. “[The] problem is that constitutional relationship between England and Scotland is a reserved matter under the Scotland Act, which means that the Scottish parliament has no power to legislate for anything that affects the constitutional relationship between two parts of the United Kingdom.”