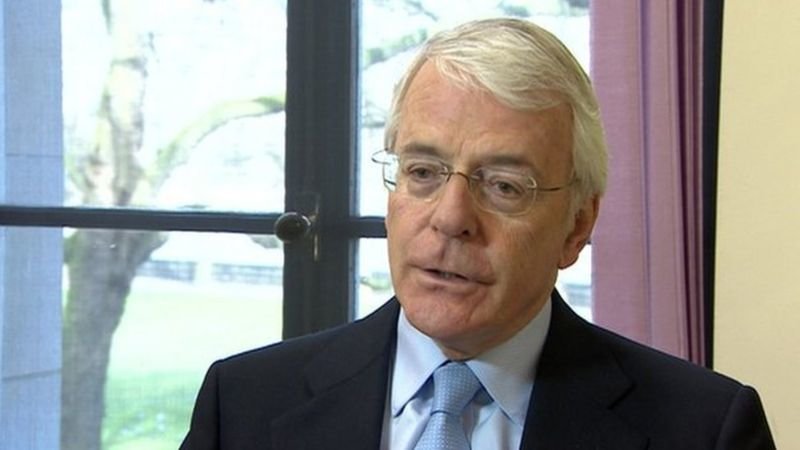 John Major: Brexit set to be 'more brutal than anyone expected'

Brexit may be "even more brutal than expected" due to the UK's negotiating "failures", Sir John Major has said.

Brexit may be "even more brutal than expected" due to the UK's negotiating "failures", Sir John Major has said.

In a speech in London, the ex-prime minister said the UK's "inflexibility" and "threats" towards the EU would make future trade "less profitable".

And he warned of the "corrosive" impact to the UK's reputation of a proposed law giving ministers the power to over-ride aspects of the Brexit Agreement.

Peers will vote shortly on whether to amend the Internal Market Bill.

They are expected to remove a series of clauses which would give the UK the right to disregard obligations in the Withdrawal Agreement with the EU in relation to Northern Ireland, a move that Northern Ireland Secretary Brandon Lewis has conceded would break international law.

Ministers have said they do not intend to use the powers but they are needed as a "safety net" in case disputes over the agreement's implementation cannot be resolved by other means.

But Sir John, who was an outspoken critic of the UK's exit from the EU on 31 January, said this "was a slippery slope down which no democratic government should ever travel".

In a pre-recorded lecture at Middle Temple, Sir John - who led the UK from 1990 to 1997 - urged Parliament to resist measures in the bill which he said threatened essential liberties and could place ministers above the law.

"This action is unprecedented in all our history - and for good reason. It has damaged our reputation around the world," he said.

"Lawyers everywhere are incredulous that the UK - often seen as the very cradle of the rule of law - could give themselves the power to break the law."

Sir John said he was not optimistic about the prospects for trade talks between the UK and EU, which resumed in London on Monday, saying the UK was not being "frank" about the possible outcomes.

The UK and EU are in a race against the clock to secure an agreement before 31 December, when the UK will leave the single market and customs union at the end of the post-Brexit transition period.

The UK has said it is hopeful of securing a comprehensive deal modelled on the EU's arrangement with Canada, but Sir John said it was "disingenuous" of ministers to pretend they were not seeking far deeper commitments in key areas, such as energy and aviation.

He said he feared, as a result, the process would end up either with no deal or a "flimsy and bare-bones" agreement that created new barriers to trade and would be a "wretched betrayal" of the promises made to British voters during the 2016 referendum.

"These costs and complexities are the certain legacy of Brexit," he said. "This is as a result of our negotiating failure - and it is a failure.

"Because of our bombast, our blustering, our threats and our inflexibility - our trade will be less profitable, our Treasury poorer, our jobs fewer, and our future less prosperous."

He added: "It now seems that on 1 January next year, Brexit may be even more brutal than anyone expected."

UK future and US relations

Sir John also warned that Brexit divisions increased the risk of the United Kingdom breaking up.

While he remained an avowed unionist, he said the UK government could find it difficult to stave off demands for another independence referendum in Scotland and should consider a two-stage process, where a vote on the principle of independence was followed by another on the terms of separation offered to the Scottish people.

In his speech, recorded before Joe Biden's election as US president was confirmed on Saturday, Sir John also warned that the UK's departure from the EU made it "less relevant" to its oldest and strongest ally.

While the UK had enormous strengths and assets, he said it was "no longer a great power" in a world dominated by the US, China and the EU and was struggling to "punch above its weight" on the international stage.

"Our hefty international influence rested on our history and reputation, buttressed by our membership of the European Union and our close alliance with the United States.

"Suddenly, we are no longer an irreplaceable bridge between Europe and America."

Prime Minister Boris Johnson has said he is looking forward to working with President-elect Biden to uphold the two countries "common values and interests".

On post-Brexit trade talks, he said on Sunday that the "outlines" of an agreement were clear and a deal was "there to be done".