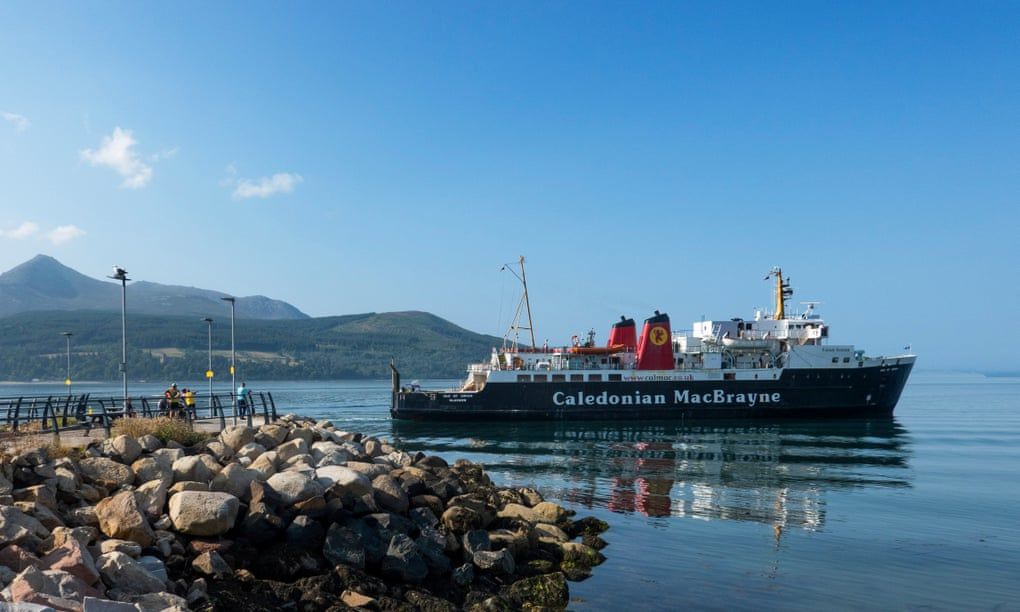 Ageing fleet hit by breakdowns and cancellations, with capacity low on services that do run due to Covid

The perfume and toiletries shop overlooking Brodick Bay on Arran is normally packed in the summer, as day-trippers and holidaymakers stream off the mainland ferries at the busy terminal just across the bay.

Its ageing fleet of red, black and white ferries has been hit by breakdowns, service cancellations and diversions, exacerbated by severe restrictions on passenger numbers because of Scotland’s strict Covid rules, cutting capacity by roughly 65%.

Island farmers have been unable to get cattle to market; B&B owners have lost scores of bookings; islanders have failed to get to weddings and hospital appointments; shellfish suppliers have been unable to get their highly prized live produce to France; while the shinty team on Lewis in the Western Isles was forced to cancel all its recent fixtures. 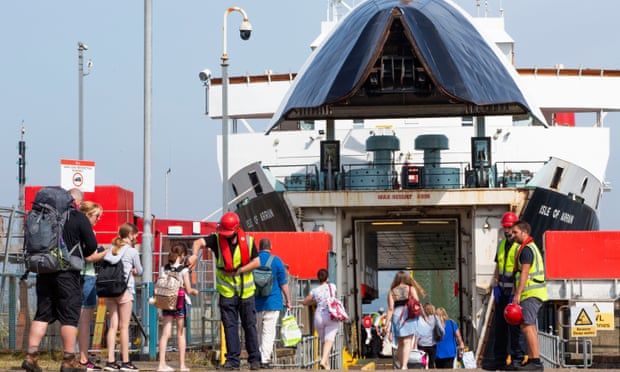 Passengers bound for Arran board a ferry.

Ferry campaigners and councillors blame CalMac and the Scottish government, which ultimately owns the ferry service, for decades of underfunding and complacency about the impact these failures have on island economies and their daily lives. The word “fiasco” is commonly used.

Russell estimates his company’s shop just north of Brodick has on some days this summer lost half its normal business. In June and July, when one of Arran’s two ferries was sent to cover one of CalMac’s busiest routes between Ullapool on the mainland and Stornoway on Lewis, after the ferry there broke down, Russell calculates the shop lost about £15,000 a week.

“It’s not fatal for us but it’s massive,” he said. “I can’t stress enough how important that store is. Summer trade sustains island businesses through the winter months.”

In tandem, service cancellations and shortage of space on the remaining ferry made it far harder for perfume, soap and handwash supplies to arrive on Arran and for those products to get off to mainland shops and customers.

Alastair Dobson, the deputy chair of the Arran ferry committee, set up to campaign for improved services, said analysis by the Fraser of Allander Institute, an economics thinktank at Strathclyde University, suggested ferry restrictions had cost the island in excess of £60m in lost revenues. “There is not a lot of resilience left,” he said. 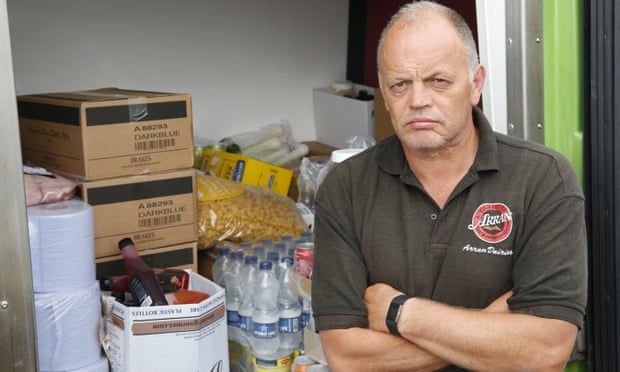 Dobson and Russell are praying that Nicola Sturgeon, the first minister, will confirm on 9 August an end to the country’s remaining physical distancing rules, which require 1-metre distancing between people on public transport.

CalMac argues those restrictions are the primary cause of the problems affecting services. Robbie Drummond, its managing director, said: “Once physical distancing rules have been removed by the Scottish government, we will make it a priority to increase to full capacity as quickly as possible.” 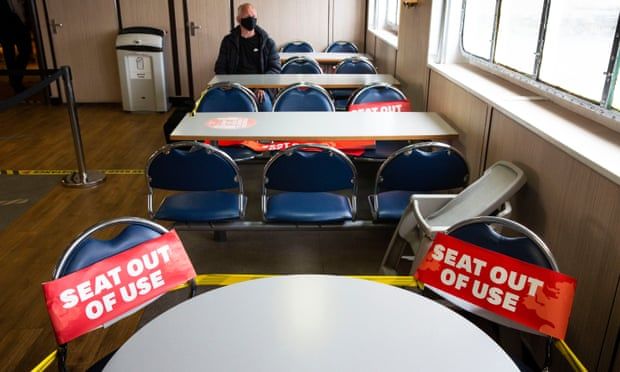 Norrie Macdonald, vice-chair for sustainability for Western Isles council, said that was only part of the solution. “Confidence in the service is plummeting and disenchantment at an all-time high,” he said.

He singled out its policy of using single large ferries to service major routes instead of several smaller vessels: if that sole ferry breaks down, a vessel must be redeployed from another route.

That happened with one of Arran’s ferries in June and July. When engine problems grounded MV Loch Seaforth, the Ullapool-Stornoway ferry, CalMac dispatched MV Isle of Arran north to replace it. CalMac tried to hire a catamaran ferry to help, but that fell through, forcing it instead to hire a freight ferry for night-time runs to Stornoway.

On 21 July, the Western Isles was hit again when MV Lord of the Isles, which links Mallaig with Lochboisdale on South Uist, broke down, affecting services for Skye, Oban and Harris. Another ferry from Arran to mainland Argyll also broke down that day. Numerous sailings were cancelled.

Joe Reade, who runs Island Bakery on Mull, supplying mainland retailers such as Waitrose, said ministers in Edinburgh had failed to invest in new ferries when Alex Salmond, the then first minister, made the widely praised decision to subsidise ferry fares to bring them in line with the average mileage costs of travelling on the mainland.

Known as “road equivalent tariff”, that slashed prices for tourists and led to a boom in visitor numbers across the islands. But it also greatly increased competition for space on CalMac’s ailing fleet, while costing taxpayers £200m a year.

Plans to add new ferries to CalMac’s fleet have since floundered: a tender to build two hybrid ferries at the Ferguson Marine shipbuilders on the Clyde has been mired in bitter contractual disputes. The boats are five years late and double their original £97m cost, with no clear in-service date.

“It’s particularly bad this summer because of the high volume of camper vans and motor homes [competing with delivery lorries for ferry space],” said Reade. “I would say it’s dysfunctional. The way the service is delivered is incredibly poor value for money.” 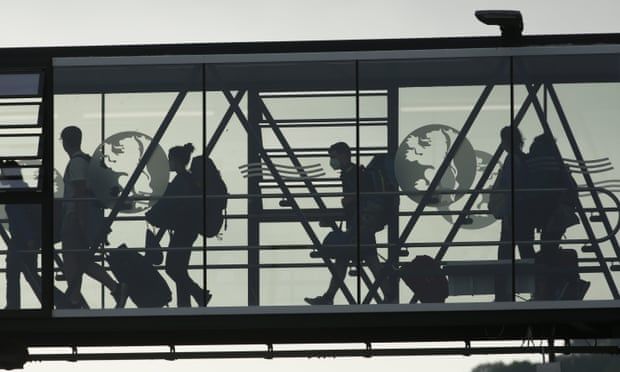 Ferry passengers. Tourism and retail businesses on Arran say they have been badly affected by service cancellations.

Donald Lamont, the club captain for Camanachd Leòdhais, the Western Isles’ shinty team, said the Covid restrictions and intense competition for ferry space had made it impossible for the 16-strong squad to guarantee arriving for games on the mainland.

They are hoping to reorganise four or five friendlies if the restrictions are lifted in August; they normally play 18 each summer. Even so, their season had been ruined. “The fiasco with procurement and the ageing fleet is going to get worse rather than better in the next number of years,” said Lamont. “It’s horrendous.”

A spokesperson for Transport Scotland, the government agency that oversees CalMac, said it sympathised, and that ministers had earmarked £580m in ferry investment over the next five years.

“We recognise communities’ frustration at the recent disruption and the impact it is having. We are doing everything that we can to support Calmac to maximise available capacity across the network,” he said. “We acknowledge the fleet is ageing and that is why we are delivering new tonnage to support our communities.”