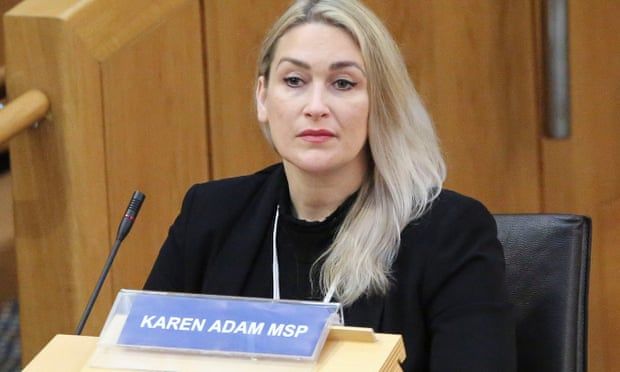 ‘I felt I had to’: SNP’s Karen Adam on revealing she was abused as child

A Holyrood politician who received death threats after she called for a more realistic debate about paedophiles has described how the experience prompted her to disclose her own abuse as a child.

Speaking in detail for the first time since the row earlier this month, the Scottish National party MSP Karen Adam told the Guardian she was hurt by “the injustice of being called a ‘paedophile enabler’ when I’m actually a survivor of this myself. But it was a great cost to me personally, and I felt that my arm was twisted to do so.”

Adam, 46, who was elected last year, became embroiled in a fierce debate after responding to the conviction of Ghislaine Maxwell. She wrote on Twitter: “Paedophiles and predators are people. Not bogeymen under the bed. Not Mac-wearing flashers in the street, faceless and nameless. They are our family, friends and colleagues.”

On reflection, she concedes that amount of nuance is hard to put across in a tweet. “But in my experience, it is often the most unlikely, unsuspecting people around us who do these things and that’s how they manage to get away with it,” she said.

“And that’s why it’s hard for children and young people to come forward because they feel nobody’s going to believe that uncle so-and-so has touched them inappropriately, because he’s a part of their family.”

She said nothing had prepared her for the backlash that built through the early days of January. Alongside many who supported her point, brutally critical responses flooded in, describing her views as “shocking”, “degenerate” and branding her a “paedophile sympathiser”. She was told to kill herself and threatened with being “put through a wood chipper”.

“I felt heartsick,” she said. “It started to dawn on me that this was not accidental, that people were perhaps purposely misrepresenting my words.”

Chris McEleny, an Inverclyde councillor and general secretary of Alex Salmond’s Alba party, responded that Adam’s view was proof that “the SNP has been captured by ideological zealots”.

Alba, founded by the former first minister last spring before failing to secure any seats in the Holyrood election, issued a press release describing the tweet as “grotesque” and saying “to attempt to humanise the most vile behaviour in society is an appalling error in judgment”.

McEleny later said he “rejected in the strongest possible way” any threats made to Adam and issued a plea to conduct political discussion online “in a much nicer way”.

“They’re purposely misrepresenting my words for political gain and to support political movements. I’ve seen this before. The more open I am about my progressive views, the more I am called a pervert, or a predator enabler, for supporting trans rights, for supporting LGBT rights overall,” she said.

The MSP for Banffshire and Buchan Coast, which covers parts of Aberdeenshire and Moray, had previously spoken in public about being the parent of a child who has experienced sexual abuse. “My daughter has been quite outspoken about her own experiences, and I always ask her permission before I discuss anything,” she said.

She had never before disclosed her own abuse, even to close family members, but the ferocity of the backlash changed her mind. “I felt I had to disclose my own story to take the focus away from her,” she said.

It was the first time her father knew what had happened. “It was overwhelming. I couldn’t eat. I felt so sick. I couldn’t sleep. My mind was buzzing at night-time. I had put it behind me and moved on. And now I’m confronted with it all again.”

Adam’s experience might initially be dismissed as another flare-up of online outrage and political point-scoring. But the personal consequences have been real enough, and reveals some uncomfortable truths about the reality of being a woman in Holyrood, the pitfalls of social media and the weaponisation of certain subjects in an ongoing culture war.

While she is grateful for the support she has received from colleagues across the chamber, Adam says being a woman in public life in Scotland in 2022 is “extremely difficult”.

She said: “I’ve come across a lot of misogyny …I’m often infantilised, people question my decisions, even in regards to setting up my staff team. And this is just everyday stuff, without even getting to the abuse.”

She added: “The most important email I received during this whole time was from a survivor who told me that they felt incredibly empowered because this was spoken about in a public sphere. You’re taught to feel shame and stigma and not talk about these things. It’s time for that to end.”