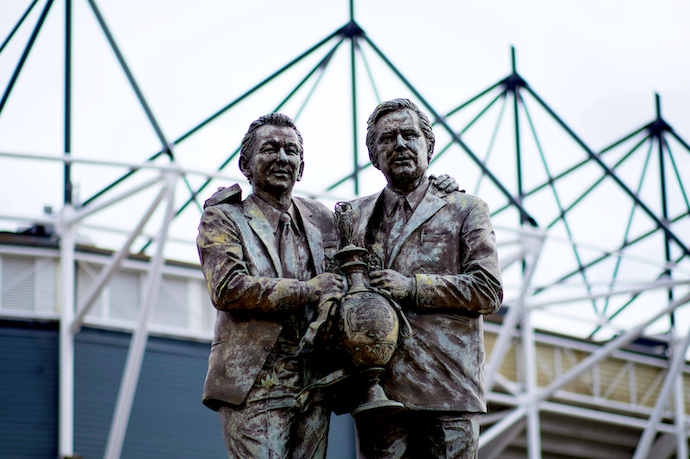 How a convicted criminal can buy a famous English football club

In a plush suite at a boutique hotel in London, a man known as The Magician is lounging on a sofa, his right arm snaking out across the top.

“The usual rubbish, I’m used to it,” he says. “I’m in the real world. I understand all of this. We’ll have no problem with any of that.”

“The Magician” is Christopher Samuelson, a football dealmaker and offshore finance specialist. He owes his nickname to his expertise in hiding clients’ money, and their identities.

He has just been told by an undercover reporter, posing as the agent for a fictitious Chinese investor who wants to buy an English football club, that the investor has criminal convictions. He was found guilty of bribery and money laundering and is on the run – which should automatically disqualify him from football club ownership.

It was a crucial moment in our investigation. We wanted to find out whether – and how – a convicted foreign criminal could buy a football club to launder his ill-gotten gains.

We thought the revelation of our investor’s crimes might prompt The Magician to make himself disappear, but Samuelson did not bat an eyelid. Instead, he offered to find a home for the criminal’s funds. “If he wants help with moving assets and he wants secure locations, I can do that too,” he said.

“Then I can organise the financial institutions who will hold them for him. Banks where he can move his money to. I have a close relationship with banks in Liechtenstein.”

‘The ultimate man in the shadows’

Few people outside the arcane world of offshore finance have heard of Christopher Samuelson. Unsurprising, perhaps, for a man once described as “the ultimate man in the shadows”. Yet in the 1990s, after the collapse of the Soviet Union, he helped to build one of the world’s biggest offshore trust companies, Valmet, with offices in Gibraltar, the Isle of Man and other tax havens.

His clients included some of the richest people on the planet: Middle Eastern sheikhs and Russian oligarchs – such as Boris Berezovsky and Arkady “Badri” Patarkatsishvili – whom he helped to move billions of dollars out of Russia.

Samuelson has been investigated by police in several countries for alleged money laundering, but never charged. In recent years, he has brokered the controversial sale of two of England’s oldest football clubs, Reading and Aston Villa.

Both were taken to the brink of financial collapse under secretive new owners. A third deal he arranged, for an unnamed wealthy Russian to buy a controlling stake in Premier League club Everton in 2004, was called off when the buyer’s name – Boris Zingarevich, a pulp and paper magnate – was leaked to the press.

We set up a fake company and contacted Samuelson. We told him we represented three rich investors looking for a “sleeping giant”, a once-great football club with a big fan base and ambitions to return to the lucrative top flight of the game.

Samuelson took the bait and agreed to meet. We briefed two undercover reporters. “Billy”, as we called him, would ask most of the questions; “Angie” would play the role of Billy’s assistant. Neither of them knew anything about football but after several long briefings, Billy eventually knew his Championship from his Champions League.

He would tell Samuelson that the criminal investor, who we call Mr X, wanted to own 60 percent of an English football club; had fled to Hong Kong and smuggled his money out of China through Macau casinos, and was sentenced to seven years imprisonment in absentia. Now Mr X wanted to clean his money.

One big hurdle for Mr X was the football authorities’ Owners’ and Directors’ Test, which bans anybody with an unspent criminal conviction, and a minimum 12 months’ jail sentence, from owning a football club,

Over a series of meetings in London hotels, a loquacious Samuelson gave a turbo-charged sales pitch, peppered with stories about football, Russian oligarchs and his own success. He spoke with an accent honed in Kent, southern England, where he was born to a society family in 1946, and at Sherborne, the private boarding school he attended in Dorset.

Samuelson said he had almost bought Chelsea, with the West Ham and England World Cup-winning captain Bobby Moore, in the 1980s when he ran a sponsorship company. He claimed that Abramovich bought Chelsea, some 20 years later, after he had advised the oligarch to buy a football club to protect himself from a political change in Russia.

He was a prodigious name-dropper but seemed well-informed and well-connected. He rattled off the names and prices of clubs for sale: Premier League teams Chelsea, 3 billion pounds ($4.1bn), and Tottenham, 2 billion pounds ($2.8bn). Charlton, Millwall and others, for much less. We were interested in a second-tier, championship side with the potential to rise to the lucrative Premier League, the world’s richest league.

Samuelson talked about Leeds United and Nottingham Forest but recommended that we go for another club, Derby County, twice champions of England in the 1970s, because he had an advantage. “I was with Mel [Morris, the Derby owner] yesterday. He’s appointed me to sell the club,” he said. He agreed to take our undercover operatives to meet Morris.

‘A gun to their head’

It was remarkable how little Samuelson even pretended to be interested in – or concerned about – how Mr X had made his money. The English Football League (EFL) – which governs the divisions below the Premier League – can require would-be owners to produce “evidence of the ultimate source and sufficiency of funds” to buy and sustain a club.

Could Samuelson really get our criminal investor approved by the EFL? The Magician was breezily confident. The EFL would be given “the minimum information”, “presented in the right way”; and he would “come up with an idea of how we can structure it so we defeat the EFL”.

“We create the bio,” he said. “We’ll say his business was real estate investment, and other sectors … We’ll just manufacture it.

“I’m an expert,” he added. “When I did the Aston Villa application, I wrote the whole thing myself and I took the information I needed and left the rest out.”

He talked tough. “I’ll hold a gun to their head. I can pressure the Football League … it will be approved,” he said. “And if we have to threaten them with legal action – watch them fall over.”

EFL investigators? Nothing to be concerned about. “Sometimes, they appoint one of these investigating firms to do a report,” he said. “If they appoint somebody, we’ll know which one is doing it and we’ll deal with them.”

Samuelson named his team: Jamie Banfill, business partner and lawyer; Andrew Obolensky, chartered accountant who worked on the Reading and Aston Villa sales; and Christian Hook, lawyer at London-based Gunnercooke, who did the legal work on the same two clubs. He would look after Mr X’s money until the sale was completed. “He’s very discreet. No leaks,” Samuelson said.

“The main thing is, do you have the money – and the fact it’s sitting in Christian Hook’s law firm’s trust account has a huge effect on them [the Football League],” he added.

“Yes, I can help here. You’ve come to the right person.”

And there was, of course, his fee: 3 percent of the sale price, extra for his associates. Plus, club director roles for himself, Obolensky and Banfill.

Samuelson mentioned another associate with “skills” to help get deals done: Keith Hunter, a private investigator and former Scotland Yard detective. “He works hand in glove with us,” said Samuelson. “He can do all kinds of things, like tap telephones and so on.”