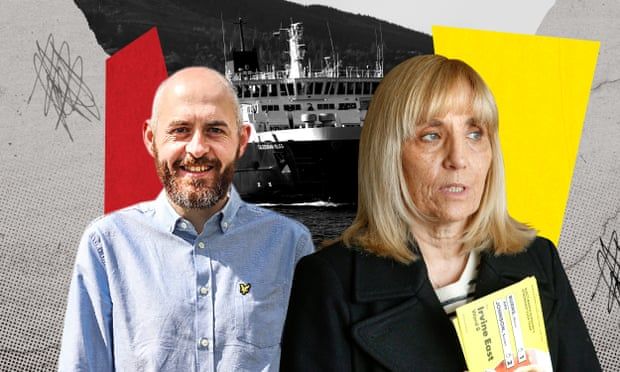 Claire O’Byrne has been living at the sharp end of Scotland’s rural housing crisis. Owing to a chronic housing shortage on Arran, she had to declare herself homeless and leave the island, and for now gambles on its ailing ferry service for visits to the island with her five-year-old daughter, Alice.

“Arran is an afterthought for everybody in terms of infrastructure and services,” she said. “It’s a nightmare. I have known so many people who have had to make a decision to move away.”

Arran is “one of the most beautiful of places,” O’Byrne said. But for her and her daughter’s father, Michael Dixon, even the most basic things are a struggle. With house prices forced up by well-off retirees snapping up coastal bungalows and buy-to-let landlords earning fortunes from holidaymakers, homes are unaffordable, insecure or unavailable for many islanders. O’Byrne tried living in a caravan and a friend’s spare room, and then was unable to find childcare for Alice, costing her a job.

On Sunday, engine failure on Arran’s largest car ferry, the MV Caledonian Isles, which links the island to Ardrossan on the mainland, caused the latest instance of what are repeated ferry delays and service cancellations. On Tuesday, holidaymakers booked on the Caledonian Isles were advised by the ferry’s operator, CalMac, to drive 125 miles to use an alternative car ferry from Kintyre.

That brought into sharp relief the impact of a badly botched Scottish government contract to build a new, more reliable ferry to replace the Caledonian Isles. Massively over budget and four years late, the vessel lies part-finished in Ferguson’s shipyard up the Clyde coast in Port Glasgow. It may be in service next year. 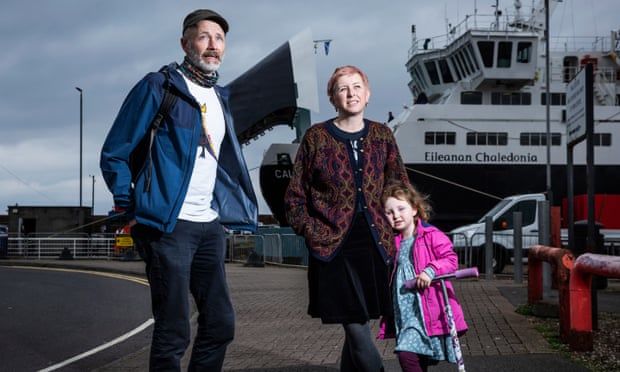 Michael Dixon and Claire O’Byrne with their daughter Alice.

These issues are uppermost in O’Byrne and Dixon’s thoughts as they approach the Scottish council elections on 5 May, when all 32 of Scotland’s local authorities are in play. Dixon owns a pizza and ice-cream shop in Brodick, Arran’s main town, but has also struggled to find housing. “It all boils down to the same thing: better infrastructure for the islands, and a better transport system, 100%,” he said.

The election in North Ayrshire will be a significant test for Nicola Sturgeon’s Scottish National party and for Scottish Labour, which appears to be enjoying a renaissance under Anas Sarwar’s leadership. Opinion polls show Labour has replaced the Scottish Conservatives in second place behind the still dominant SNP, with Sarwar’s party benefiting from hostility among unionist voters to Boris Johnson and Labour’s increased popularity at UK level.

The Liberal Democrats are also benefiting from Tory desertions, Alex Cole Hamilton, the party’s Scottish leader, said last week. Cole Hamilton said voter anger over the Partygate scandals was the most intense he had ever encountered. “This is political strychnine for the Tory party,” he said.

North Ayrshire has been run since 2017 by a minority Labour administration. The election will be a contest between Sturgeon’s heavy focus at national level on anti-poverty measures and health service investment, and Labour’s local record.

“We’re doing things differently in North Ayrshire,” he said. Voter turnout remains uncertain but he believes questions about the SNP’s competence, the Tories’ fitness for office in Westminster and his council’s policies are resonating with voters. “[Those issues] are coming together and giving us a better response on the door than we’ve had for a number of years,” he said.

Marie Burns, the SNP group leader, acknowledged the ferries crisis would be an issue for some voters in Ardrossan and on Arran. “The whole thing has been a bit of a disaster,” she said. “I can understand people’s frustrations and I wouldn’t take away from that.” 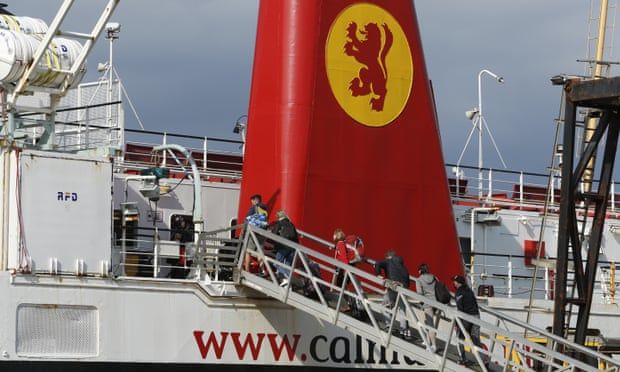 Passengers board a CalMac Isle of Arran ferry.

Even so, Burns argues the broader cost of living crisis matters more. That has dominated conversations with voters at the SNP’s hub in Irvine, a converted shop on high street that was a base for yes campaigners in the 2014 referendum. “They say they’re really struggling,” she said. “It’s food, energy, how their shopping bills have gone up, and they’re really worried about how they’ll heat their homes.”

Burns points to Sturgeon’s decision to double child benefits for low-income families in Scotland to £20 a week, partly driven by pressure from opposition parties and anti-poverty campaigners. That will benefit 4,000 families in North Ayrshire. “That’s what the SNP is doing for you,” she said.

While Labour may well hold North Ayrshire, it is unlikely to unseat the SNP minority administration in Glasgow or take Edinburgh, where the SNP shares power with Labour. Sarwar’s aides argue the major test for Labour is increasing its vote share, which fell by 11 points to 20% in 2017, and its overall number of councillors, from the 262 won in 2017. Labour gains on 5 May should signal a far more significant recovery in time for the next UK general election.

Scotland’s system of electing councillors by proportional representation means it is rare for a single party to win outright; it leads to coalitions or minority administrations. Sarwar has ruled out Labour deals with other parties. He hopes to see Labour council leaders emulate Cullinane in running a minority administration.

O’Byrne, an Australian who moved to Arran in 2015, is one voter who has benefited from North Ayrshire’s housebuilding strategy. She has been allocated a two-bedroom house in a new council-owned estate in Brodick, allowing her to return home in a few months.

Michelle Bunting, the deputy headteacher at Arran high school, agreed that the ferries were “a nightmare” but she believes voters will focus far more on basic services that the council directly controls: affordable housing, support for people with special needs, and economic regeneration. “Housing, particularly for young folk who may want to stay in the islands or come back but they just can’t afford to do it,” she said.