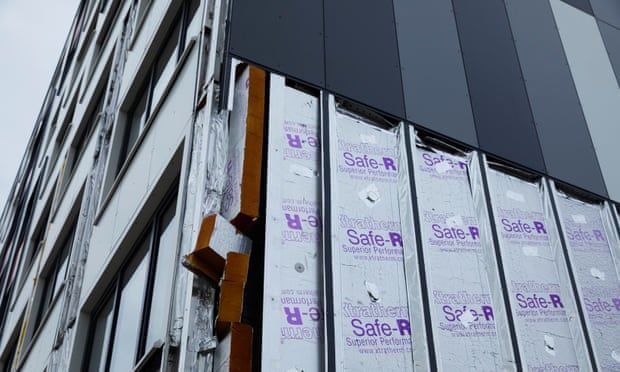 Funds for remediation including removal of flammable cladding still short of £4bn government estimate
Major UK housebuilders have so far promised to spend about £1.3bn to remove cladding and other fire hazards from mid-rise housing blocks, but are still short of the estimated £4bn needed to avoid another Grenfell Tower-style disaster.

On Wednesday Barratt Developments and Redrow were the latest to reveal how much they would put aside to address life-threatening fire safety issues in the housing developments constructed by the firms over the past 30 years. Barratt said the decision would cost it up to £400m, while the figure for Redrow is £200m.

The sums add to the cash already put aside by rivals including Bellway, which has so far pledged £186.5m, and Taylor Wimpey, which has promised to spend about £245m, amid growing government pressure.

Barratt said its decision to sign an industry pledge to address the issue reflected four years of talks with government, following the Grenfell Tower fire in London in June 2017 that killed 72 people and was blamed in part on developers’ use of combustible cladding. Housebuilders have stressed that they followed building rules set by the government at the time.

“Through constructive engagement between industry and government, a proportionate and sensible approach has been found and we look forward to completing the remediation process as quickly as possible,” Barratt said.

Persimmon confirmed earlier this week it expected to spend about £75m to address the issue, while Crest Nicholson said remediation would cost the firm between £80m and £120m. Berkeley Group said it was committed to dealing with the issue, but did not disclose its own estimates.

The collective provisions from the UK’s largest housing builders are still short of the £4bn the government has estimated is needed to remedy the fire risks across mid-rise buildings – between 11 and 18 metres high – in England, Scotland and Wales.

The commitments to date come amid pressure from the housing secretary, Michael Gove, who has pushed 53 UK developers to sign a pledge to cover the costs of remediation, and protect leaseholders from footing the bill.

However, some private developers are understood to be withholding commitments, amid fears the financial burden would push them into failure.

The Home Builders Federation (HBF) lobby group has said the government has not explained how it arrived at the £4bn estimate. This does include the costs of repairing housing blocks put up by foreign companies and firms that have gone bust, but it is not clear who will be required to cover these costs, or who will be responsible for fixing developments more than 30 years old.

The cost of removing hazards like cladding from buildings higher than 18 metres is set to be funded in part by a 4% levy on housebuilder profits derived from UK housing developments.

The HBF said the money pledged so far demonstrated “the commitment of UK housebuilders to step up and meet the ‘polluter pays’ demand by government and to our long-stated principle that leaseholders should not foot the bill”.

It said other companies across industry, including contractors and manufacturers of insulation and cladding, should also be asked to cover the costs of any buildings not addressed by pledges to date.

“It is our strong assertion that other parties … are asked to make contributions before the government makes further demands on UK housebuilders to fix buildings with which we had absolutely no involvement. If ministers are genuinely interested in the ‘polluter pays’ principle then that seems fair,” the HBF said.
Add Comment