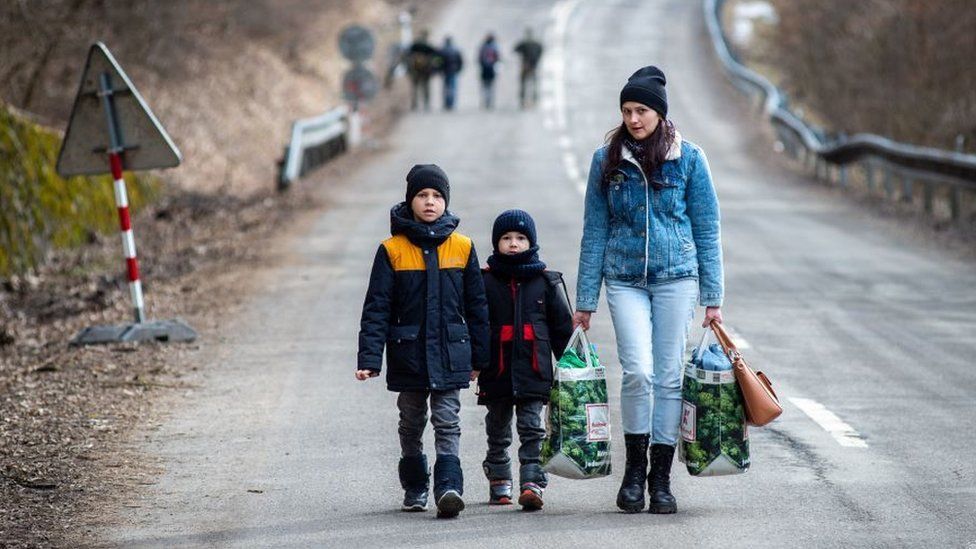 The men, some with a reported history of violence, message the women on Facebook groups specially set up to connect sponsors and hosts.

Some refugees have also become homeless after relations with hosts broke down or because housing was not well vetted.

But a UK government official said safeguards were in place.

These included "Home Office security and background checks on all sponsors, before visas are issued", and at least one council visit to a sponsor's property.

A charity head labelled the Homes for Ukraine scheme dangerous and said she was "shocked by the absence of safeguarding checks".

In March, the government announced the scheme would allow anyone to host a family or individual, if they agreed to housing, criminal-records and other background checks. The system is slightly different in Wales and Scotland.

Numerous Facebook groups were set up by local support networks and individuals, in response. They have become one of the main ways of connecting families and sponsors.

Last month the UN's refugee agency, the UNHCR, raised concerns about the system, highlighting what it called "the need for adequate safeguards and vetting measures to be in place against exploitation".

In EU countries, accommodation is organised primarily by national authorities and charities. There are also some private arrangements.

While some British charities have tried to match applicants with potential hosts, many refugees are using the informal Facebook groups.

There is evidence predatory males are joining these groups.

One whistleblower with knowledge of the official scheme told the BBC in some local authorities, as many as 30% of all registered would-be sponsors are single men over 40 - the majority of them offering to host single women in their 20s and 30s. The government says it does not recognise those figures. 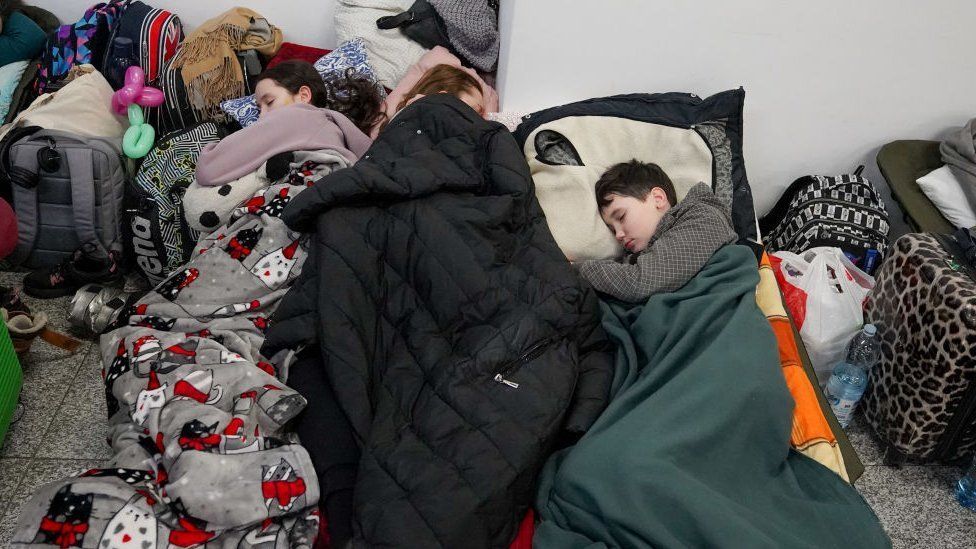 Millions of Ukrainians have been displaced

The BBC findings were "deeply concerning and undermine the sponsorship programme", said Robina Qureshi, chief executive of Positive Action in Housing. She described the scheme as "dangerous".

Her organisation would never place a woman with a single man, and the government, she said, "has created chaos, no risk checks, no due diligence".

On a Facebook group set up to help match Ukrainian refugees, BBC News found one would-be sponsor who appears to live in a one-bedroom flat posting multiple offers to host young women.

Someone who knew him well claimed he had multiple convictions, including for burglary and affray.

Police records indicate he was reported for allegedly carrying a crossbow and threatening a former partner, although no further action is believed to have been taken.

Another man, in Manchester, had joined several Facebook groups and was offering a spare room to a string of young, single, Ukrainian women.

He was also a member of a dating site called Single Ukrainian Women. Elsewhere on his timeline, he had written Islamophobic comments.

It is not known whether either of these men was approved under the Homes for Ukraine scheme.

Councils are meant to approve each property and complete Disclosure and Barring Service (DBS) checks on all potential hosts they know about, including those who make contact via Facebook.

But the basic DBS checks are limited. Enhanced checks are requested only if there are children involved.

A basic DBS check had raised no concerns about a man in his 50s offering to host a young Ukrainian woman, a source told BBC News

But when staff performed a more detailed check of social services records they found multiple complaints against him, including for domestic abuse and harassment.

The UK government has come under pressure to speed up the settlement of refugees from Ukraine, with many complaining visa and host approvals have been unnecessarily slow. But it's thought that some councils are struggling with a lack of resources.

The BBC found numerous posts on Facebook from Ukrainians who had reached the UK, but found their accommodation unsuitable.

In such cases, often local charities step in to find emergency accommodation.

One post from a volunteer helping new arrivals said: "I was contacted by a young woman who had arrived on Saturday. She wanted to change hosts. I asked what the issue was and she sent me videos. The home wouldn't pass an inspection to rehome a dog."

The refugee involved, who does not want to be identified, told BBC News: "She is a kind person but her house is a very big cluster of mess. There are many repairs needed. I couldn't go in the kitchen. I couldn't live here."

That refugee had received a visa under the Homes for Ukraine scheme, but the squalid condition of the property suggests no-one from the local council appeared to have checked the host's accommodation.

She has since been rehoused.

BBC News also learned of a Ukrainian who said she had been shown pictures of the bedrooms she and her two young children would be using. But on arrival, her entire family had been expected to sleep in one small reception room next to the kitchen, with no privacy.

The property had not been inspected. There had been no DBS checks. And she says the house was filled with Nazi memorabilia.

"The family... have Nazi pictures and Soviet symbols," she said. "I don't feel safe."

She left and found a better host through social media but feels deeply scarred by the experience.

"I do not want my children to feel unsafe again and we feel unsafe," she said. "I think we will go back to Germany."

While offering to support a refugee in her own home, Mira Kozlowska, who is Polish but lived in the UK for 21 years, has found herself helping to match others with suitable sponsors on social media.

"So many people are arriving and wanting to change sponsor," she told BBC News. "It's a huge problem on the horizon."

"Just now, I saw a post about how the sponsor wants the family to be out all day and not in the house.

"Another girl was talking about how she didn't even have a door on her room and no privacy."

Another newly arrived refugee said, through an interpreter: "When we arrive, there is no bed, just a mattress on the floor.

"The apartment is cold and when I put on the heater he shouts.

"There is no food in the kitchen and we have no money."

Under the Homes For Ukraine scheme, hosts receive £350 per month from the government.

And Ms Kozlowska said: "I'm basically wondering how many people are doing it solely for the extra £350 - very scary."

The government rejects those criticisms and said "attempts to exploit vulnerable people [were] despicable".

"The Homes for Ukraine scheme has safeguards in place, including Home Office security and background checks on all sponsors before visas are issued. Councils also conduct checks and must make at least one in-person visit to a sponsor's property."