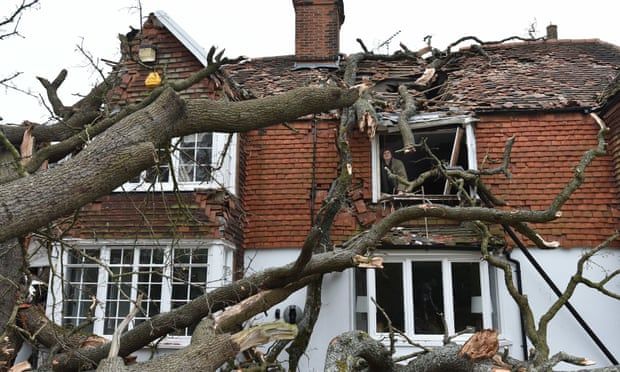 Patrick Langmaid was among the first to feel the full ferocity of Storm Eunice. Perched above the sea near Cornwall’s Trevose Head, his campsite was battered by the record-breaking storm as it barrelled in from the Atlantic on Friday.

Tiles were torn from his holiday cottages. Soon, caravan 311 had its roof ripped clean off. Langmaid ordered staff to stay put. “We just let it go. It was not worth risking anyone’s safety for it.”

Langmaid has run Mother Ivey’s Bay holiday park near Padstow for 34 years and said he’d seen nothing to rival the intensity of Storm Eunice.

It was an observation repeated throughout the country on Saturday. As a major clear-up got under way, the full scale of the damage steadily became evident, symbolised by London’s O2 arena where a sizeable section of the roof was torn off. On Saturday, its fabric roof could be seen flapping in high winds as fresh gusts hit the capital. 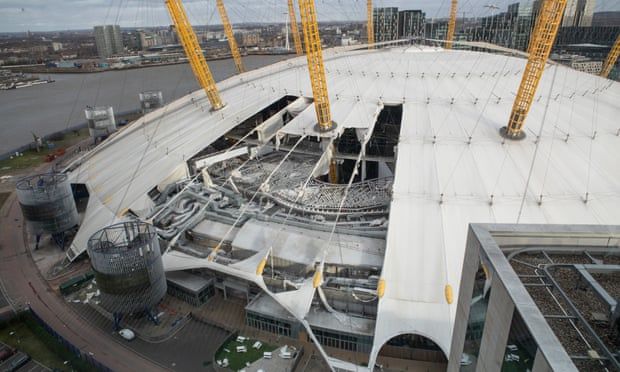 The O2 in London, with sections of its roof ripped off.

The Met Office had issued a fresh yellow weather warning for wind for parts of England and Wales, warning of speeds of 60mph, though this is not even half the 122mph gust recorded at the Needles on the Isle of Wight on Friday, the highest ever recorded in England.

Meanwhile, widespread travel disruption was reported across the UK. Drivers were hampered by key road closures, with some bridges, including the M48 Severn crossing, which links England and Wales, closed.

Yet such difficulties were dwarfed by the chaos faced by rail passengers. Many services remained shut on Saturday following the cancellation of hundreds of trains on Friday. Rail chiefs reissued “do not travel” notices for a number of key routes.

National Rail spoke of “major disruption” to services “across most of Great Britain”. South Western Railway said its struggles could be traced to the more than 40 trees that fell on its routes. Elsewhere, Southeastern said a train had struck a fallen tree just outside Longfield in north-west Kent.

For many, being stuck at home was misery enough. Tens of thousands of homes remained without power throughout Saturday, as energy companies apologised for delays in restoring electricity to homes and businesses.

As a second night without power approached for some householders, fears grew that some rural homes face remaining cut off well into this week because of the extent of the damage and the challenging conditions. 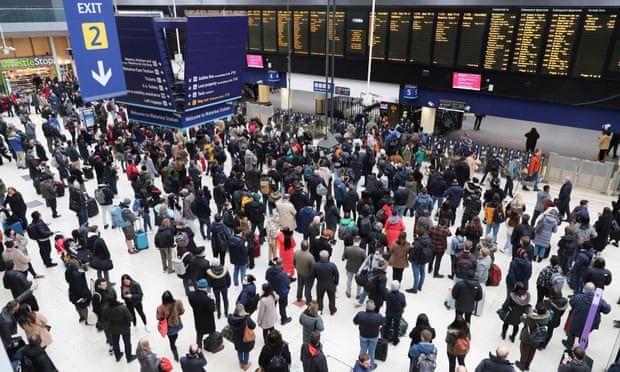 People wait at London’s Waterloo station, as trains are delayed and cancelled after Storm Eunice.

A provisional cost of the havoc caused by Eunice was calculated by the Association of British Insurers (ABI) to be around £360m.

Four people are known to have been killed by Eunice in the British Isles. The first victim to be identified was Irish council worker Billy Kinsella: the 59-year-old was struck by a falling tree as he cleared debris from a road in County Wexford.

Across Britain, large numbers of trees are believed to have been felled by the storm, including a 400-year-old oak that destroyed part of a family home in Essex.

Dominic Good, 57, was taking a work call at his detached house in Brentwood when he heard an “almighty crash” – the huge oak tree had fallen through the roof.

“The roof is pretty much destroyed, and my son’s and daughter’s bedrooms are completely filled with rubble,” he said.

Few trees are likely to be mourned as much as one linked to Isaac Newton in the grounds of Trinity College, Cambridge. This apple tree, grafted from the one at the great thinker’s family home in Lincolnshire, where he first started formulating his theory of gravity, was another that failed to withstand Eunice’s blasts.

The university announced that the strong winds “proved too much for it”.

In Haringey, north London, a woman in her 30s was killed on Friday by a falling tree while travelling in a car. The local authority was “working tirelessly to clear fallen trees and debris and to secure any structures that pose a risk”, said the council leader. 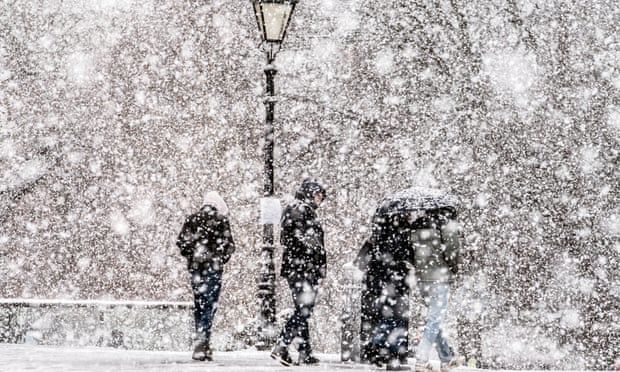 Elsewhere, challenging weather conditions continued, with snow falling across northern England. A yellow warning for wind is in place for most of Scotland and north-west Wales, while a yellow rain warning covers Lancashire and Cumbria.

Greg Dewhurst of the Met Office warned travellers to prepare for more windy weather in the coming days.

More than 200,000 properties in England and Wales began Saturday without power, but providers predicted that the “vast majority” of customers would be reconnected by the end of the weekend.

However, energy chiefs, also cautioned that conditions for workers are difficult, causing concern that this timescale may slip.

Among notable buildings damaged by Eunice was the spire of Victorian Saint Thomas church in Wells, Somerset, which was pictured crashing to the ground. No timetable has yet been set for its repair.

No date has been announced for when London’s O2 arena will be repaired and reopened, after parts of its roof were torn away from their supporting ribs by the storm on Friday morning.

Elsewhere, meteorologists continued with the task of calculating how strong Eunice was in historical terms.

Dewhurst said: “It is also about how widespread Storm Eunice was, so we will be looking at whether this storm was worse than the Burns Night storm [in 1990], or the one in 1987, when gusts were between 80 and 90mph – but the damage may have been more widespread.”

Back in Cornwall, where Eunice first struck England, attempts to get back to normality were being hampered by high winds and heavy rains, which increased the threats of wind-weakened trees falling as well as flooding from the large Atlantic swell.

In Newquay, charity DISC Newquay, which works with poor and vulnerable people, said it was feeding hundreds more than usual.

“Hunger doesn’t go away just because there is a storm on,” said Monique Collins, who said she had one of the busiest days ever, providing food parcels, a cooked meal and cash for electricity meters to 600 clients.

“Some of the people we help live in tents or sleep in vans and cars. It was horrendous for them,” said Collins.

Further up the coast, Langmaid was mapping the damage to his holiday park. “It was just really ferocious,” he said. Like many, he doesn’t expect to wait decades before another storm to rival Eunice arrives.