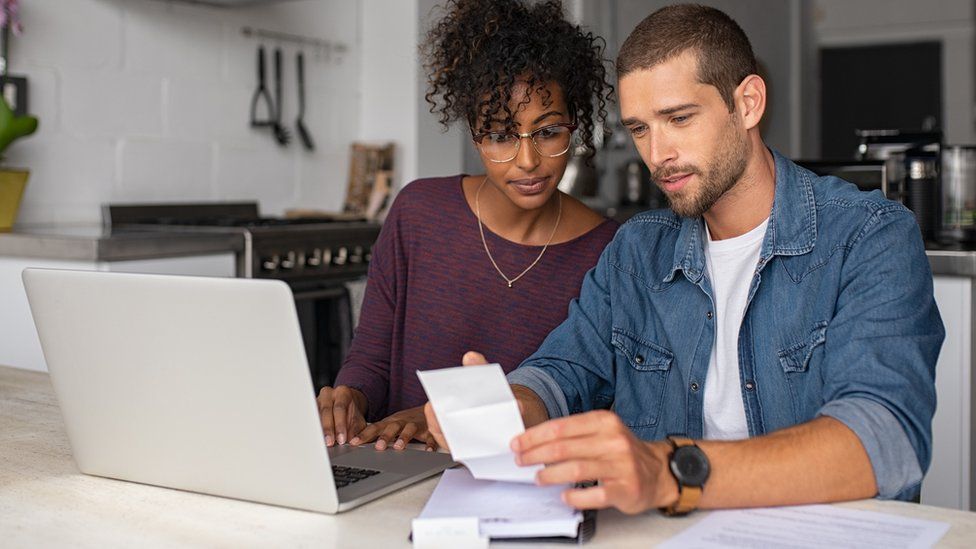 The burden of tax falling on workers and employers has increased as a hotly-debated rise in National Insurance payments takes effect.

Employees, businesses and the self-employed will pay an extra 1.25p in the pound. The extra tax is earmarked for government spending on social care.

Some MPs opposed the move amid cost of living pressures, but mitigation will instead be introduced in July.

Experts are urging people to check their status as a new tax year starts.

Earnings levels at which people start to pay income tax have been frozen, increasing the chances of employees being dragged into a new band - with a higher rate of tax - if they receive a pay rise.

How National Insurance will change

Employees pay National Insurance on their wages, employers pay extra contributions for staff, and the self-employed pay it on their profits.

In September, the government announced the rise in contributions from 6 April, in part to help ease the burden on the NHS.

Those of state pension age do not pay the tax at present, and nor do those on very low incomes.

After the announcement last year, the plans were met with disapproval from opposition parties and some backbench Conservative MPs who criticised the timing, as many people face sharp rises in energy bills and prices in general.

Chancellor Rishi Sunak responded in his Spring Statement with plans to allow workers and the self-employed to earn more before they start making National Insurance payments. This will take effect in July. 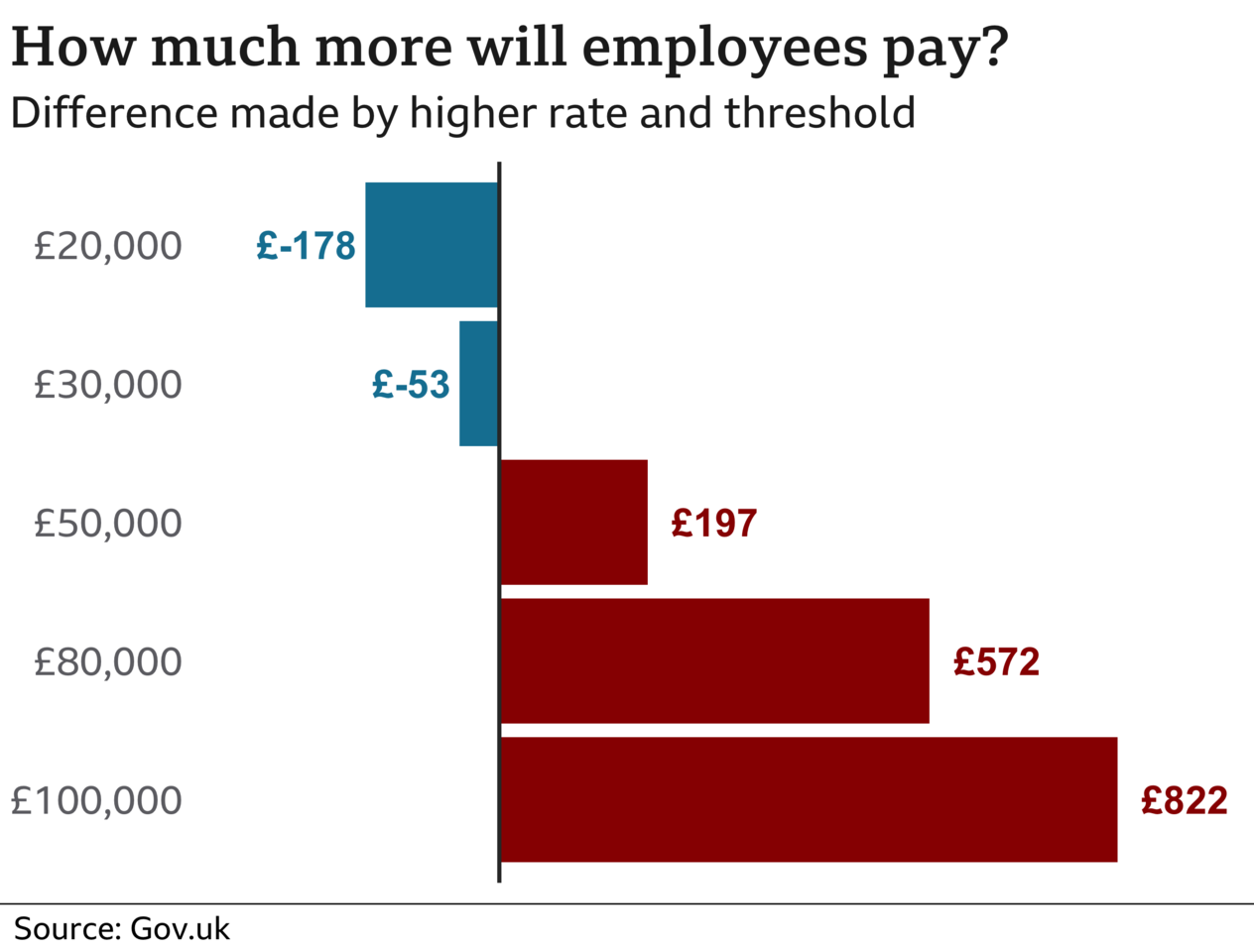 Taken together, the measures mean that, over the next 12 months, anyone earning less than about £34,000 a year will pay less in National Insurance than they did the previous year, while those earning more will see their payments rise.

Had the chancellor stuck with his original plan, then all but the very lowest income workers would have paid more in National Insurance.

Many employers will still pay more, and business groups have warned that this may be passed on in higher prices. They also said it would add to the pressures already faced by firms following the withdrawal of Covid support measures.

Among those concerned about the bill is Hanna Gentry, an assistant general manager at George's Bistro in Cleckheaton. 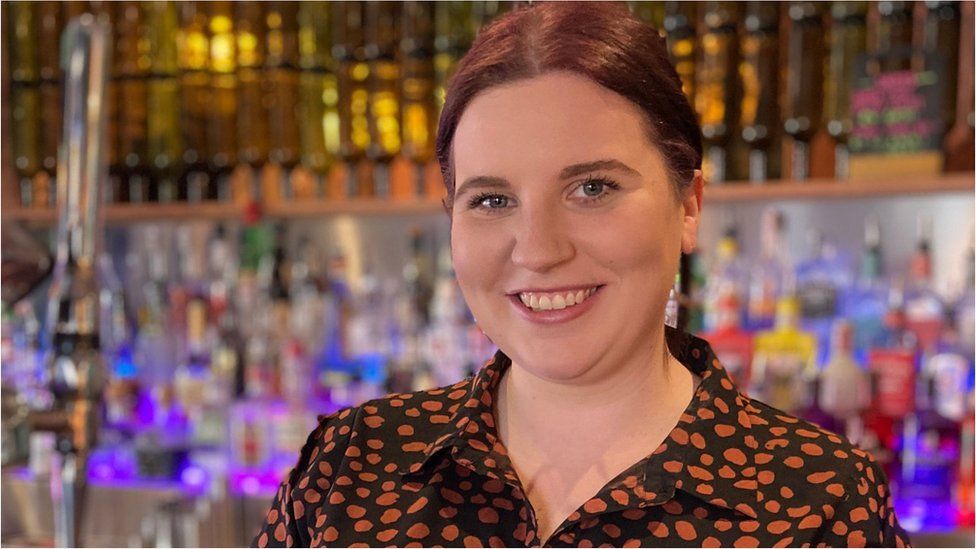 "Personally for me if I look at my wage I think it's not too much, but as a business when you have to pay that on everybody's wages, it adds up really really quickly," she said.

"We are going to try and bring in more custom, that's the only way we can do it - in terms of events, new menus, to try and draw customers in."

Meanwhile James Hipkins, managing director of Emery's Timber and Builders Merchants in Stoke and Telford, told the BBC's Today programme the rise was "another little extra bit" to add to the rising cost of materials, fuel and energy.

"My greater concern is, is it the beginning of a perfect storm? By that I just mean all the little snips going up, is it going to start to stifle industry?"

However, Mr Hipkins said society had a "moral obligation and responsibility to this" to fund social care services, which he added have been "overlooked" for too long.

"At this stage is it seems a bit wishy washy and woolly as it's coming in. I would feel a lot more confident and a lot more happy when I see it as an actual separate levy and it can be identified for where it's supposed to be going."

The government said it had raised Employment Allowance from £4,000 to £5,000, so smaller firms could claim up to £5,000 off their National Insurance bills. Ministers said it meant 670,000 firms would not pay the tax at all.

Overall, the increases in National Insurance for employers and higher-income workers will raise an extra £10.9bn in a year for the government, according to the Institute for Fiscal Studies.

Prime Minister Boris Johnson described it as "necessary, fair and responsible", adding that it would "provide the health and care system with the long term funding it needs as we recover from the pandemic".

Next year, the extra tax will be rebranded as the Health and Social Care Levy.

An increase in the tax on dividends is also coming into effect, to add to the funds channelled by the government into the NHS and social care.

It has also gone up by 1.25p in the pound. Many private investors hold shares in an Individual Savings Account (Isa) which protects them from tax. However, some business owners pay themselves in dividends and so will face a tax rise.

Early last year Mr Sunak said the thresholds at which income tax is paid would be frozen at April 2021 levels for five years (although Scotland has different levels). That means pay rises will push more people into higher tax bands.

Adrian Lowery, personal finance spokesman at investing platform Bestinvest, urged people to check their tax code, which is issued by HM Revenue and Customs and can be found on a pay slip.

"A tax code of 1257L is currently used for most people who have one job or pension. If yours is different, make sure you understand why, so you're not paying too much tax," he said.

At last month's Spring Statement, Mr Sunak pledged to reduce the basic rate of income tax by 1p in the pound before the end of the Parliament in 2024.

For this new tax year, the personal allowance of capital gains tax has also been frozen at £12,300, so this much profit can be realised from assets in a year before tax is paid.