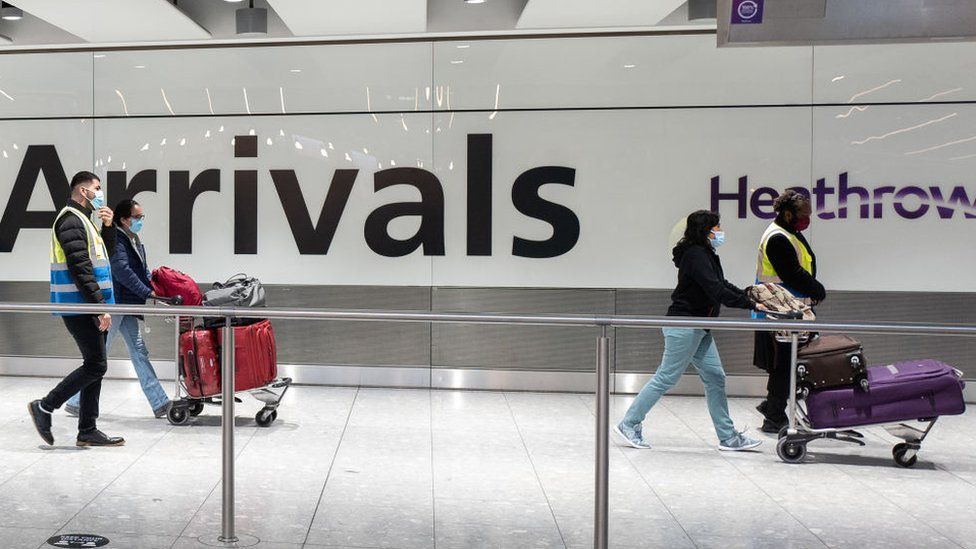 Heathrow Airport has refused to allow extra flights from India before the country is added to the UK travel red list on Friday.

It turned down the requests from airlines because of concerns about queues at passport control.

The airport told the BBC that it did not want to exacerbate existing pressures at the border by allowing more passengers to fly in.

From 0400 on Friday many arrivals from India will be refused entry.

British and Irish passport holders, and people with UK residence rights, will be allowed in, but must quarantine in hotels for 10 days.

Last week, a director at the airport said the situation at the border - which is operated by the Home Office - had become "untenable" because of delays in processing arriving passengers.

Four carriers requested to operate an additional eight flights from India as travellers seek to fly before the enforced quarantine comes into effect. Currently, 30 flights a week are operating between the UK and India.

The Civil Aviation Authority confirmed that it also received applications for charter flight permits from India to the UK - but these had been declined or withdrawn as they did not meet the qualifying criteria.

A government spokesperson said: "We are in a global health pandemic - people should not be travelling unless absolutely necessary.

"Every essential check helps avoid the risk of importing dangerous variants of coronavirus which could put our vaccine rollout at risk."

On Monday the Department for Transport announced that India would be added to the government red list because of rising infection rates and a new variant.

Since then, online travel agent Skyscanner said searches for flights returning to the UK from India had increased by more than 250%.

When the new rules come into effect, anyone arriving in England or Scotland from India will need to stay in a government-sanctioned quarantine hotel for 10 days and follow a strict coronavirus testing regime at their own expense.

There are currently no direct international flights from India into Wales or Northern Ireland.

In England, a stay in one of the quarantine hotel costs £1,750 per passenger travelling alone. That includes transport, tests, food and accommodation.

A briefing document drawn up by officials at Public Health England shows that between 25 March and 7 April, 3,345 arrivals from India were registered in UK border travel data. Of those 161 - or 4.8% - tested positive for Covid-19 after a PCR test.

Earlier this week, Prime Minister Boris Johnson cancelled a planned trip to India, which had been due to take place on 26 April.