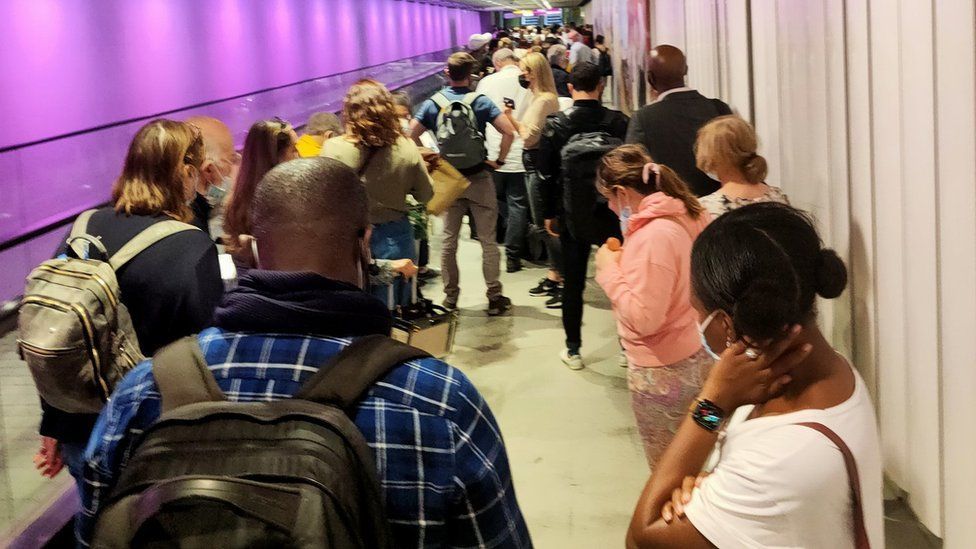 Images on social media showed packed queues at the west London airport on Friday night, with travellers complaining of waits of several hours.

A Heathrow spokesman apologised for the delays, but blamed Border Force for not providing enough staff at immigration.

The Home Office, which has responsibility for Border Force, said the wait times were "unacceptable".

It said Border Force was "rapidly reviewing its rosters and capacity and flexibly deploying our staff across the airport to improve waiting times".

Travellers at Heathrow used social media to complain about lengthy queues with inadequate ventilation, while some claimed people had fainted while they were waiting.

One Twitter user said: "There are people collapsing in Terminal 5 Arrivals due to overcrowding and no ventilation. Some Covid secure measures…"

Another said: "Horrendous kettling at Heathrow Terminal 5 arrivals tonight. No Border Force. No ventilation. No fire exits. No explanation. Held there for over an hour. People fainting. Panicked skeleton Heathrow ground team not knowing what to do."

On Saturday morning, Heathrow Airport tweeted that it was unable to say how long travellers would have to queue for immigration.

In a subsequent statement, the airport said it had "escalated" the issue with Border Force and expected it to provide a better service over the weekend.

A Heathrow spokesperson said: "We are very sorry that passengers faced unacceptable queuing times in immigration due to too few Border Force officers on duty.

"Border Force were aware of the extra demand from families and we are very disappointed that they did not provide sufficient resource.

"We have additional Heathrow colleagues to support in managing queues and to hand out passenger welfare including water, but we need every immigration desk to be staffed at peak times.

"We have escalated this with Border Force and expect them to provide a better service over the remainder of the weekend."

The Home Office said it was the busiest weekend of the year for returning passengers, with particularly high numbers of families with children under the age of 12 who cannot use e-gates.

A Home Office spokesman said: "Throughout the pandemic we have been clear that queue times may be longer as we ensure all passengers are compliant with the health measures put in place to keep the UK public safe. However, the very long wait times we saw at Heathrow last night are unacceptable...

"Border Force is rapidly reviewing its rosters and capacity and flexibly deploying our staff across the airport to improve waiting times."

The Home Office added that Border Force was working closely with Heathrow Airport and its airlines and was committed to ensuring passengers had "a safe and hassle-free journey".

The ISU union, which represents borders, immigration and customs staff, said Border Force had been "chronically under-funded for years" at major airports, with new recruits directed to inland and international trade to address issues arising from Brexit.

Speaking about the scenes on Friday, an ISU spokeswoman said: "It will happen again. Not just at Terminal 5 but potentially at any large airport." 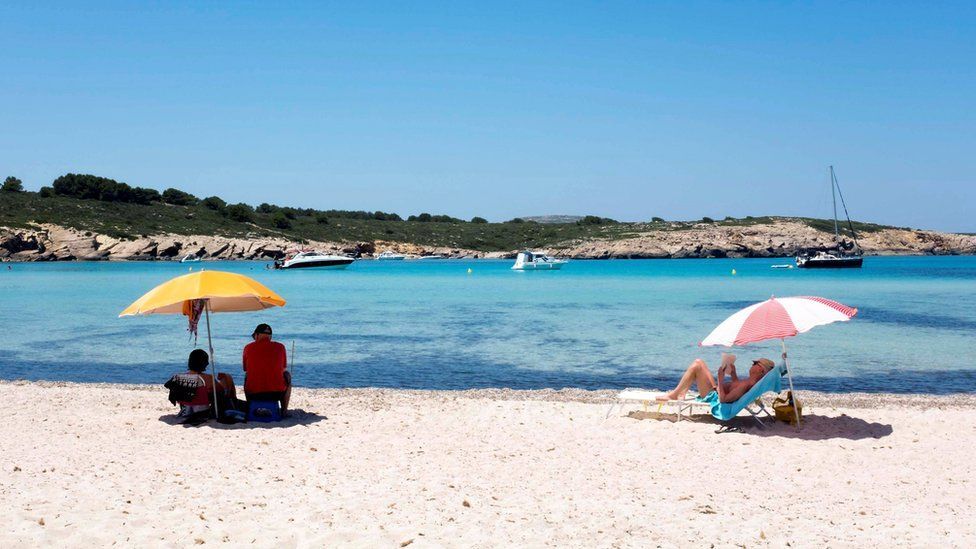 The UK's travelling restrictions were eased for many on 19 July when the government dropped the requirement for fully-vaccinated people and those under the age of 18 years and six months to quarantine after returning from amber list destinations.

Most countries - including the UK's most popular holiday destinations - are on the amber list.

Travellers coming from green list countries do not need to quarantine when they come back to the UK - whether or not they have had two doses of a coronavirus vaccine.

However, travellers from green and amber destinations must have one test before returning to Britain and another two days after they get back.

Only British nationals can enter the UK directly from a red list country, and they must pay to quarantine in government-approved hotels and be tested.

Travel lists are currently updated every three weeks and the system is similar for England, Scotland, Wales and Northern Ireland.

*  Countries are placed on different coloured lists depending on the Covid situation in each nation
*  Green list countries are said to carry the lowest risk for travellers - and so isolation is not required, though testing pre-arrival and on day two is needed
*  Most countries - including the UK's most popular holiday destinations - are on the amber list
*  Amber list arrivals do not need to isolate if they are fully vaccinated or under-18 - but testing is required pre-arrival and on day two after landing
*  Those who have yet to have both jabs will need to isolate and take additional Covid tests
*  Only British nationals can enter the UK directly from a red list country and they must pay to quarantine in special hotels and be tested.