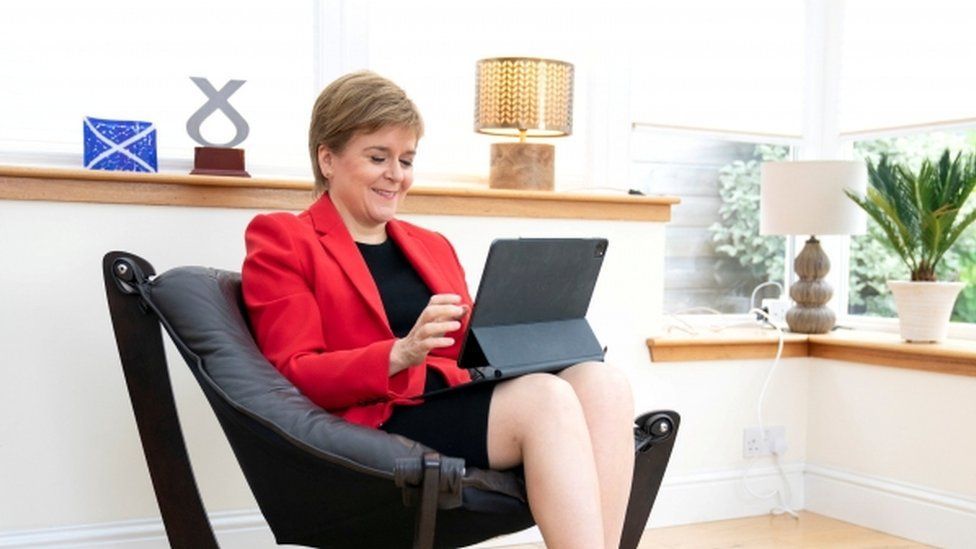 Has Scotland moved closer to a second independence referendum?

Nicola Sturgeon has urged the UK government to agree to a new Scottish independence referendum, saying that "democracy must and will prevail".

The first minister was addressing the SNP's virtual conference the day after her predecessor, Alex Salmond, told his new Alba Party that the independence movement was stuck in "Groundhog Day".

What do these two rival conferences tell us about the current state of the independence movement, and how near we might be to a fresh referendum?

It may have been delivered from the sedate setting of her front room rather than to a hall packed with cheering crowds, but be in no doubt that this conference speech was a triumphant moment for Nicola Sturgeon.

In the past six months she has led the SNP to yet another election victory, cemented a majority government with the backing of the Greens, and - after an incredible row which threatened her position as first minister - vanquished her mentor-turned-nemesis Alex Salmond in the process.

With the worst of the Covid pandemic hopefully in the rear view mirror, Ms Sturgeon is arguably in the most comfortable and powerful position she has ever occupied. So what is she going to do with it? 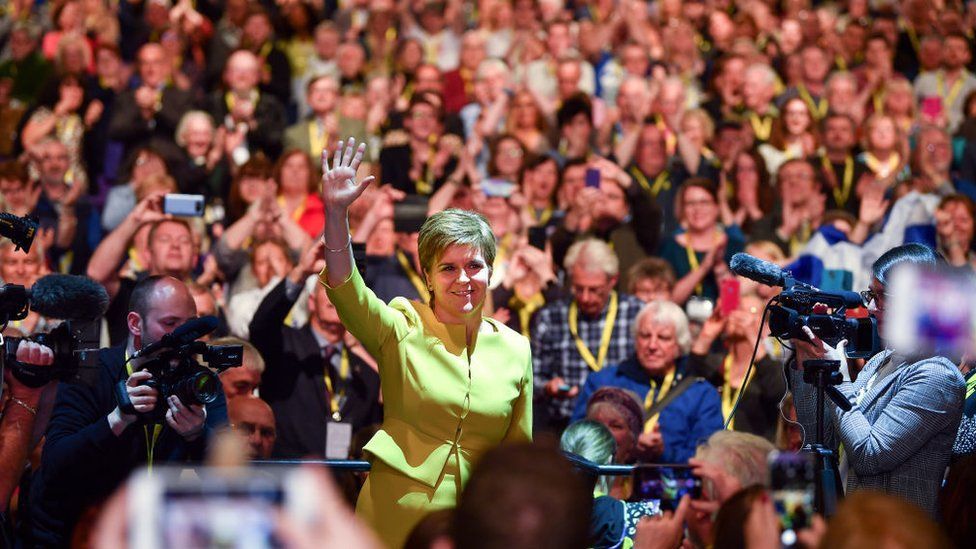 The totality of Ms Sturgeon's triumph can be summed up by the motion passed by SNP delegates on Sunday calling for a "data not dates" approach to a fresh independence referendum.

Journalists used to go to SNP conferences searching for signs of dissent in the ranks, of impatience with the leadership's gradualist approach to the party's founding goal, of calls for a "Plan B".

This year, the rank and file were urging the famously cautious first minister not to move too quickly on independence. They backed a motion stating that Scots should not have their wellbeing and future prosperity "compromised" by a snap referendum, and that it should not happen until there has been a "clear end to the public health crisis".

Only five people took part in the debate - all in favour of Ms Sturgeon's Plan A - and it passed by an overwhelming vote of 535 to 10.

This is perhaps because many of those critical of Ms Sturgeon's approach had not logged on to the online conference. Instead they were in Greenock for the first gathering of the Alba Party, Alex Salmond's new vehicle. 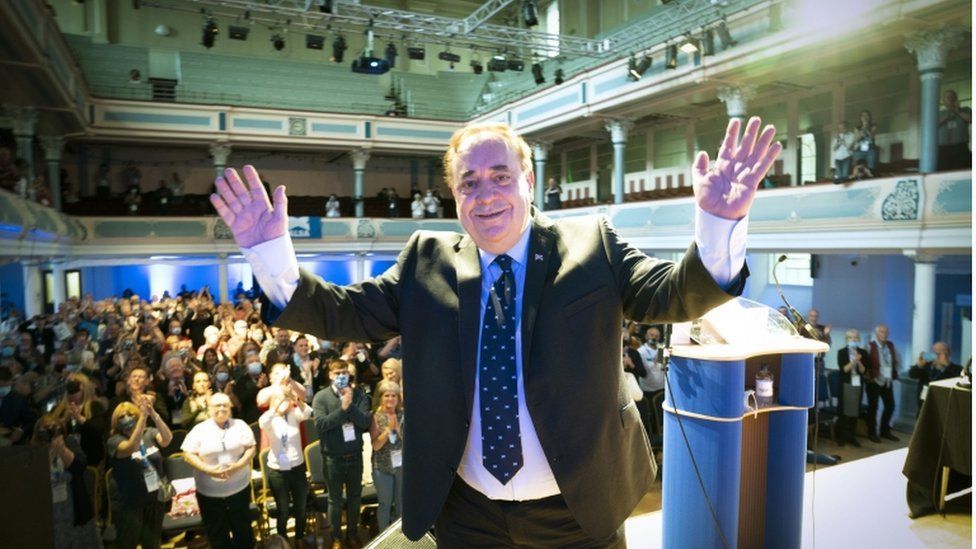 Mr Salmond was sharply critical of his old party - and by extension Ms Sturgeon's leadership - in his speech on Sunday. This was necessary, to sell the idea that an alternative to the SNP is required.

However, it is unlikely to have upset the first minister to a great extent, as her predecessor has somewhat inadvertently helped to consolidate her position.

The two titans of the independence movement clashed in spectacular fashion during the Holyrood inquiry into the government's botched handling of harassment complaints against Mr Salmond.

The former first minister claimed he had been the victim of a conspiracy cooked up by people at the top of the SNP - effectively encouraging independence supporters to divide into two rival camps, Team Salmond and Team Sturgeon.

He became a figurehead for pro-indy people who had gripes with Ms Sturgeon's leadership, across a whole range of subjects from referendum planning to the Gender Recognition Act. When he launched Alba, many of them defected to join him.

And so when the SNP cantered to victory in May's election, in stark contrast to Alba's 1.7% of the vote, Ms Sturgeon's authority as leader of the movement was cemented.

The SNP is Team Sturgeon, and where she goes the membership will follow. 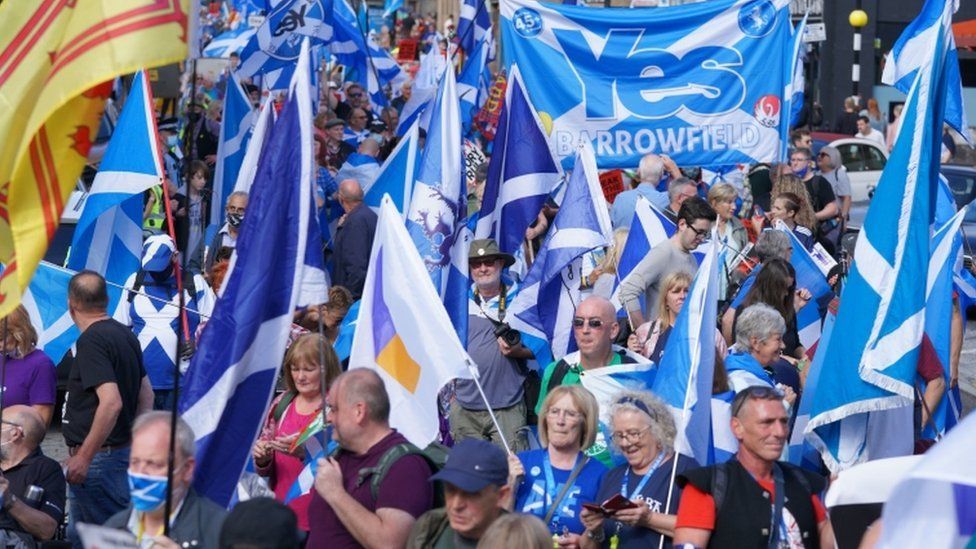 When pondering where Ms Sturgeon is headed, however, there is an immediate reminder that not everything is within the first minister's control.

Covid-19 is not the only thing stopping her from setting a date for a referendum. There is also the standoff with Boris Johnson and his UK government.

In many ways, the SNP are glad to have Mr Johnson in Downing Street. They see him as an ideal recruiting sergeant for the cause of independence, much as Scottish Labour secretly loved having Margaret Thatcher as a bogeywoman in the 1980s.

But the fact he is refusing to play along leaves the ball on the pro-independence side of the court, with little clear indication or precedent of what to do with it.

Scottish ministers could pass a referendum bill through Holyrood and go to the Supreme Court to defend its legality, but the outcome would be far from certain.

So Ms Sturgeon has resorted again to political pressure. She told activists on Monday that "democracy must and will prevail".

This is a familiar line from previous conference speeches; in 2019, the SNP leader claimed that "we can already see the cracks appearing" in the UK government's resolve.

Those cracks do not appear to have widened much. Downing Street waved away the idea within minutes of Monday's speech, saying that it is "simply not the time" for a new poll. 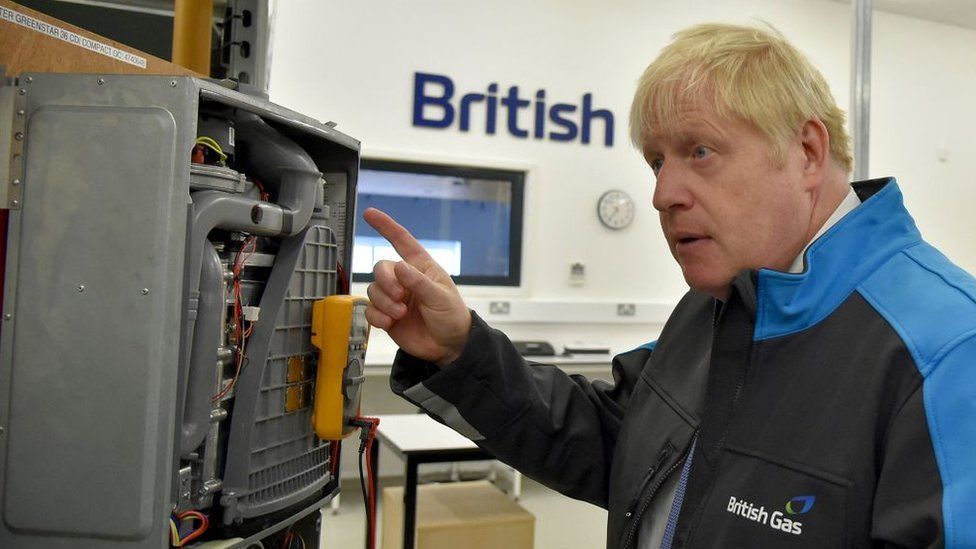 It is particularly striking that this year, Ms Sturgeon did not feel the need to throw red meat to her party base on progress towards a referendum.

She told members to "trust me" - safe in the knowledge that they do - and said it was her "hope" that an agreement with Mr Johnson could be reached.

In stark contrast to the Alba conference, there was no talk of forcing the issue, of trying to bend Westminster to Holyrood's will.

Instead Ms Sturgeon said she would proceed in a "spirit of cooperation" rather than confrontation.

Despite her personal two-year timetable for holding a vote, the first minister is still playing a longer game.

Her calculation is that post-pandemic, a conciliatory tone goes down better with the electorate. People like politicians to at least try to work together - this is one reason why the Greens have joined the SNP in government.

The goal is not to win Mr Johnson around directly. It is to convince a substantial proportion of the Scottish public, and let the weight of public opinion crush the prime minister's position. 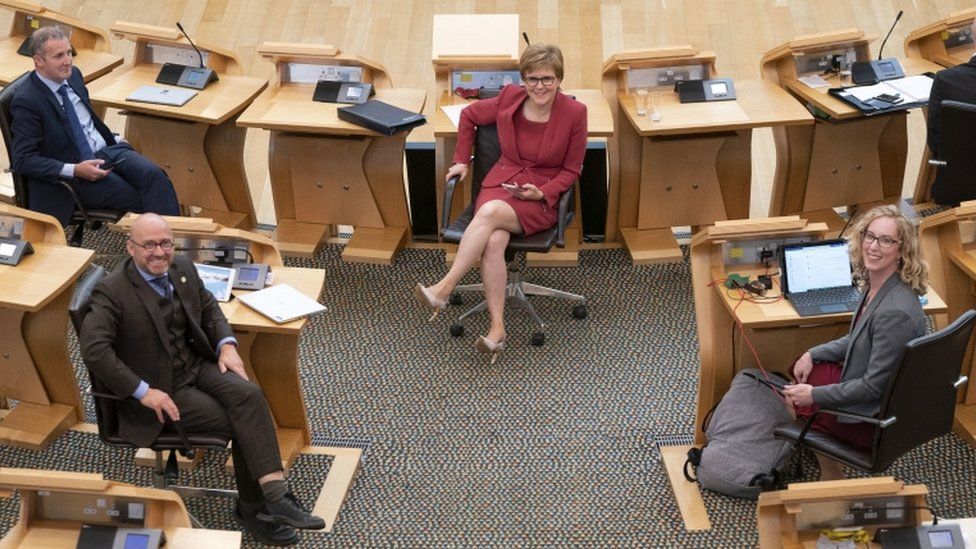 While the questions over process hang in the air, Ms Sturgeon is also turning her focus to the more substantive issues around the independence debate.

There is serious work to be done here. Things had changed enormously since 2014 even before the pandemic struck.

Scotland's finances look radically different today to the vision set out in the original White Paper, with a first minister talking about phasing out the oil and gas industry rather than riding it into a new age of prosperity.

Brexit has also thrown up a myriad of issues, from borders to trading arrangements and potential wrangles around EU accession talks. Big questions linger over concepts of currency and constitution.

If and when a referendum campaign comes to be fought, it will be on these issues, rather than the questions of process which persist today.

This is another reason why Ms Sturgeon is not pushing for a referendum to be held tomorrow.

Her speech outlined the big-picture vision for independence - a model similar to that of Denmark or Ireland - but there are some vexing details still to be thrashed out. Hence a small team of civil servants is beavering away on a "detailed prospectus" for independence, to give the electorate an "informed choice". 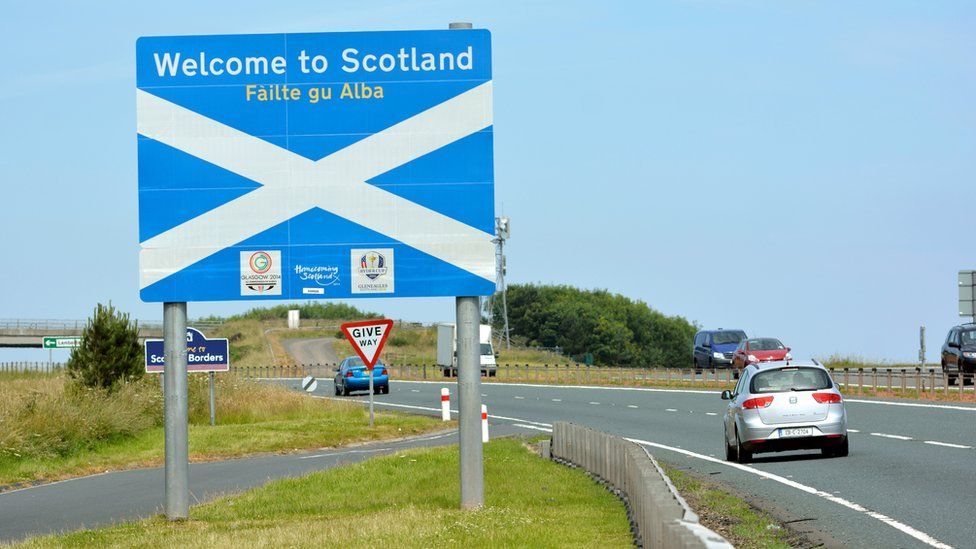 In her speech, Ms Sturgeon said the government was working to deliver three things. A robust pandemic recovery, indyref2, and "the most ambitious programme for government ever put before the people of Scotland".

This latter means big projects, using Holyrood's existing powers. Things like the creation of a National Care Service, and studies of potentially transformational schemes like a minimum income guarantee.

This may raise a question of whether such projects would have to shift to the back burner during a referendum campaign.

But it also raises the matter of whether Ms Sturgeon even needs a new referendum to secure her legacy.

Next year she will become Scotland's longest-serving first minister, eclipsing the mark set by Mr Salmond. If she was also the first minister who led Scotland through a pandemic and set up a new generation of public services, her place in the history books would surely be secure.

Right now, heading into a new parliamentary term with her fate in her own hands, Ms Sturgeon's ambition will be to hit all three of the targets laid out.

On all three fronts, though, the challenge is the same. Actually delivering on grand plans is the key.