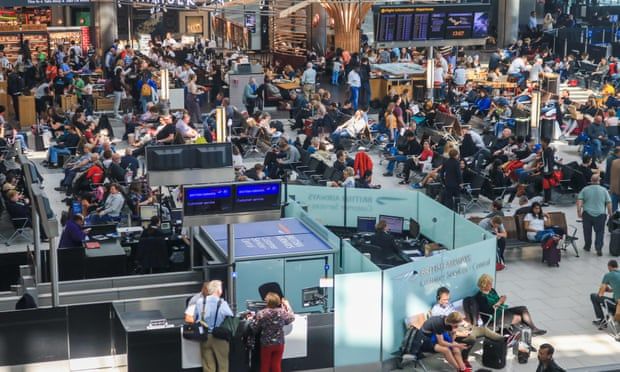 Half-term holiday bookings have jumped by 200% compared with August since the government announced a relaxation of travel rules in England, the travel firm Thomas Cook has said.

On Friday, the transport secretary, Grant Shapps, unveiled plans to simplify the Covid rules around trips abroad from next month, scrapping the traffic light system and replacing it with a pared-down “red” list of countries from which arrivals will continue to be required to quarantine in a government-supervised hotel.

Testing requirements for vaccinated travellers from England are also being eased, prompting Labour to voice concern about the spread of variants. From 4 October, passengers who have had both jabs will not need to take a pre-departure test before returning to England from a non-red list country, and from the end of October, a lateral flow test will be accepted in place of a day two PCR test. Lateral flow tests are significantly cheaper, but also less accurate.

Alan French, the chief executive of Thomas Cook, said he expected bookings to increase even further following the rule changes that led to the 200% rise. “Based on our bookings already today, I would expect this weekend to be the biggest of the year so far as people take advantage of the great deals on offer, the new easier rules on testing and the simplified system for international travel,” he said.

Within half an hour of the transport secretary’s announcement, Skyscanner also had a 133% increase in online traffic.

Chris Parker, the director of capacity and commercial performance at DFDS Ferries, also welcomed the changes. “We’ve seen an immediate spike in visits to the website and uptick in bookings for October onwards,” he said, adding that there had been a “real collapse in bookings” this year, with the company forecast to receive only 20% of the bookings it got in 2019.

The chief executive of the Airport Operators Association, Karen Dee, urged ministers to relax the rules further, saying that the aviation industry in the UK had not recovered at the same speed as its counterparts in many European countries. She said that on average, UK airports will only see about 20% of passenger numbers in 2021 compared with a normal year, whereas European countries are recording at least 50%. “That’s all down to the complexities we’ve built in to the testing system,” Dee said.

Scotland and Wales have said they will reduce their red list in line with England’s, removing Egypt, Sri Lanka, Oman, Bangladesh, Turkey, Pakistan, the Maldives and Kenya. However, Scotland has said it will not follow it in relaxing testing requirements, with the Scottish transport secretary, Michael Matheson, saying there were concerns that doing so would “weaken our ability to protect the public health of Scotland’s communities”.

While the Welsh government said it would consider the rule changes, the health and social services minister, Eluned Morgan, also said they could “weaken the line of defence on importing infection and increase opportunities for new infections and new variants to enter the UK and Wales”.

Labour also expressed concerns over loosening testing requirements. The shadow transport secretary, Jim McMahon, called on ministers to “set out in detail exactly how they will continue” to monitor variants “to ensure we do not see a repeat of the failings that allowed the Delta variant to spread rapidly through the country”.