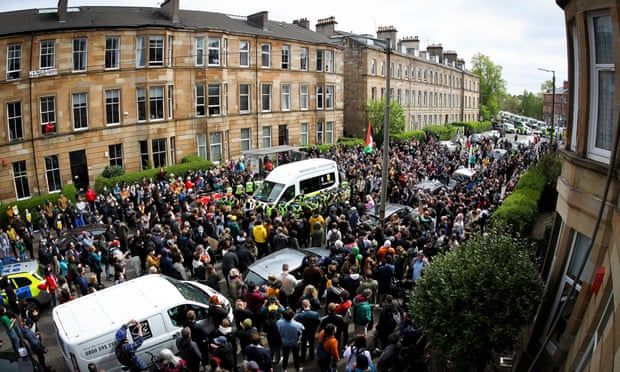 Leading Glasgow politicians have written to the Home Office telling officials to stop unannounced immigration raids, as the Scottish Refugee Council urged Police Scotland to “push back” against further operations.

Their demands came a week after a peaceful protest prevented the detention of two men in the south of the city.

The cross-party signatories, who included Nicola Sturgeon, the Scottish Labour leader, Anas Sarwar, and the leader of the Scottish Greens, Patrick Harvie, said in a joint letter: “We are proud to say that, for more a decade, regardless of who has been in power in Scotland, there has been cross-party opposition to dawn raids.”

They described the home office operations as “expensive, harmful, lacking in compassion and more often than not aimed at people who are no threat to public safety”.

Sabir Zazai, the CEO of the Scottish Refugee Council, said: “We need Police Scotland to use the operation notification process to push back on the over-the-top and scary Home Office raids that have no place in Glasgow or Scotland.”

While immigration enforcement is reserved to Westminster, Police Scotland are usually informed in advance of a raid via an operation notification form, which also allows them to consider the community impact of the planned action.

The two men, Lakhvir Singh and Sumit Sehdev, Indian nationals who had been living in Glasgow for a number of years and have family connections in the city, were eventually released after a crowd of local residents and activists prevented the van in which they were held from driving away during a stand-off that continued for nearly eight hours last Thursday.

Police Scotland said the operational decision was taken to protect the “safety, public health and wellbeing” of everyone involved. 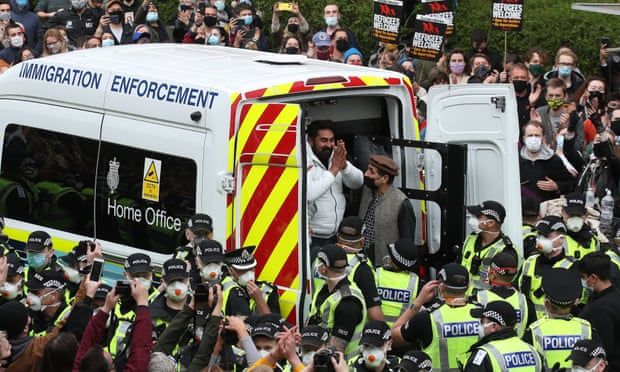 One of the two men is released from the back of the immigration enforcement van in Kenmure Street last Thursday.

Since the events on Kenmure Street, campaigners have raised concerns about Police Scotland being notified and potentially called to raids by the Home Office, and the need for them to use this notification process to advise against raids.

While senior Scottish government ministers said the force was placed “in an invidious position” last Thursday, there have been demands for greater transparency around the protocols used, tighter limits on them and clearer communication between the Home Office, the police and the Scottish government so that enforcement raids only occur when there is serious risk to public safety.

Responding to a written question on Wednesday from the Alba MP for East Lothian, Kenny MacAskill, Chris Philp, the UK government’s minister for immigration compliance and justice, described the raid as “a routine, lawful operation; the police were informed of the visit in advance through an operational notification form and raised no concerns”.

A Police Scotland spokesperson said: “Police Scotland does not have responsibility for immigration enforcement. We will, however, respond to any incident reported to us to ensure public safety and minimise disruption to the local community.”

Graham O’Neill, policy officer for the Scottish Refugee Council, said the organisation was asking the police to enforce strict limits on the use of immigration enforcement in Scotland.

“Left to their own devices, the Home Office will deploy enforcement and leave local communities and services, including Police Scotland, to deal with an aftermath of damaged community relations and trust, all at a time of fragile Covid-19 public health recovery.

“We ask Police Scotland to use its expertise, intelligence and position, in relation to the Home Office enforcement notification process, to advise for strict limits upon the use of immigration enforcement actions in the community in Glasgow and in Scotland, and especially never directly targeting those in asylum accommodation.”

Legal representatives for Singh and Sehdev are progressing their cases. Singh’s lawyer, Jelina Berlow-Rahman, said: “Each case should be considered on its own facts and merits.”