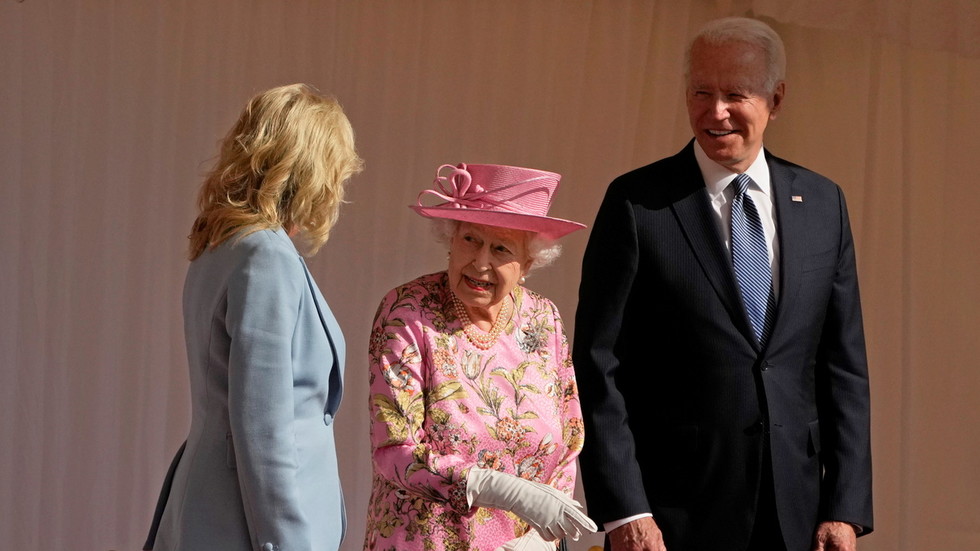 George Galloway: After Biden’s addled appearance at the G7, we can only hope he’s never left alone with the nuclear codes

The G7 was predictable theatre macabre, but the US president’s bewilderment and confusion – in stark contrast to the acuity of 95-year-old Queen Elizabeth, who is still very much on top of her game – will be the lasting memory.
As a befuddled Joe Biden was led around court at the so-called G7 by his good wife, the young Queen Elizabeth – sans the Duke of Edinburgh for the first time – held centre stage.

Age affects us all in different ways and one must extend charity towards the afflicted. But the US head of state cut a sorry spectacle when not in front of a teleprompter – at least by comparison with his hostess, who, at 95, is 17 years his senior.

The 78-year-old president said the Queen reminded him of his mother, which might have been why he climbed on her knee with a pelican bib on and asked her for a rusk.

I made that last bit up, but such was the US president’s permanently bemused bewilderment in England, nobody would have been too surprised had he done so.

Mrs. Biden – Dr. Jill – played the role of mother to Joe rather well, in fact. If not for her, several times, live on TV, Biden looked as if he might have walked off the end of the pier or waltzed into the waves.

Not since Konstantin Chernenko has a more obviously gerontocratic cipher been in charge of a nuclear strike force. Kamala Harris must have been watching keenly in case Biden turned out to be not waving, but drowning.

The contrast with Queen Elizabeth was marked. Still effervescent, wisecracking and in control, she truly has seen it all. Her reign has been so long, her first American counterpart was President Truman!

Truman, Eisenhower, Kennedy, Johnson, Nixon, Ford, Carter, Reagan, Bush1, Clinton, Bush2, Obama, Trump, Biden… 14 US presidents have shaken hands with the Queen, including one when she was a young princess.

Yet, however embarrassing drooling Biden might have been at the high table, he will not have taxed the royal patience like his predecessor, the vulgarian Donald Trump. The Donald, despite his Hebridean ancestry, seemed not to have had the slightest idea of royal protocol. Between laying hands on the royal personage to walking ahead of her and showing her his broad back, he couldn’t have performed worse short of demanding the cheeseburger option instead of the venison.

Biden apart, the man to watch at the G7 was little Macron, the would-be emperor of France, as he fluttered around like a little brightly coloured butterfly alighting on one leader after another.

Locked in a ‘sausage war’ (I kid you not) with Boris Johnson and the UK – a symptom of the ‘long-Brexit’ malaise by which the Europe simply cannot shake off Britain’s decision to leave the Holy Roman Empire of the EU – Macron knows that Biden, like Obama before him, is not particularly fond of Great Britain, and that, Atlantic Charter balderdash aside, will do his best to do us down.

Biden’s antecedents were Irish. That was centuries ago, but there’s no Irishman like a US politician seeking election. Obama’s were Kenyan. The sharp-eyed will have already seen my point.

Macron has identified the chance of relations spéciales with America to replace the special relationship Britain is said to enjoy with its successor in the empire stakes. Playing Greece to America’s Rome was our job. Macron sees himself as Charlemagne. I hope they kept the Queen’s throne roped off!

It was all just theatre macabre, of course. The G7 represents neither the world’s democracies nor its largest economies. Canada can be there only out of sentiment. Indonesia, India and other truly large democracies are excluded. The second-largest economy in the world, China, likewise. Europe’s largest country – indeed the world’s largest country – Russia is persona non grata over the ‘invasion’ of Crimea.

But the US/UK invaders of almost every nation in the world sat at Her Majesty’s pleasure. And China and Russia were still there, of course, living rent-free in the heads of those who were in attendance. It was a Cold War ramp that descended on England’s green and pleasant land.

And it was as regrettable a sight as poor old Joe shuffling around like an embarrassing elderly relative. We must hope Mrs Biden is never indisposed, leaving her husband alone to kick the nuclear football.
#Boris Johnson  #Donald Trump  #Joe Biden  #Johnson
Add Comment