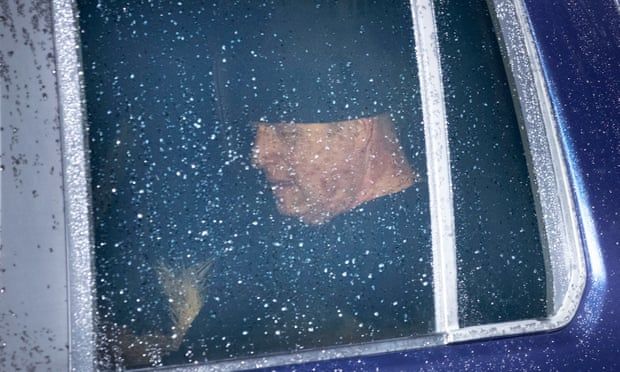 Furious Tories pile pressure on Boris Johnson over No 10 parties

Boris Johnson is facing intense pressure from senior Conservatives to publicly confess he attended a rule-breaking garden party in Downing Street, with the Scottish Tory leader suggesting the prime minister should resign if he broke Covid rules.

A string of Conservative MPs openly expressed anger and humiliation about the “bring your own booze” gathering for up to 40 people on 20 May 2020 after it emerged in a leaked email. Others called on him to come clean and apologise on Wednesday in the hope of stemming rising fury.

Johnson has declined to say whether he and his then fiancee, Carrie Symonds, attended the event. About 100 Downing Street staff were invited by Martin Reynolds, Johnson’s principal private secretary, to “make the most of the lovely weather”.

The former minister Johnny Mercer described the revelations as “humiliating”, while the MP for Keighley, Robbie Moore, said: “The email from Martin Reynolds infuriates me. I have no idea what these people were thinking.”

Caroline Nokes, another former minister, said: “I have no words that can adequately express how angry I am at the ‘don’t do as I do, do as I say’ attitude that appears to have prevailed in Downing Street.” Mark Harper, the chair of the influential Covid Recovery Group, said: “These are serious allegations. The prime minister will be in the House of Commons [on Wednesday] … and I await his explanation with interest.”

Privately, more Tory MPs said they were waiting for Johnson’s explanation at prime minister’s questions. “He should fess up, take responsibility personally, and apologise – not one of these pretend apologies but a proper apology,” said one.

Another said: “It’s so disgusting. I just feel I have been lied to. I just think the whole operation is a liability.” They added that Tory MPs were exchanging angry messages on WhatsApp about how reluctant they are to expend political capital defending Johnson.

A third former minister warned: “None of this is yet irretrievable, but this is another notch on the dial: we’re moving up the scale from retrievable to irretrievable.”

Douglas Ross, the leader of the Conservatives in Scotland, told STV he was “furious” that while other Britons were banned from seeing dying or hospitalised relatives, “people in 10 Downing Street were enjoying the sunshine out the back of No 10 and quaffing the booze”.

Ross suggested the controversy could prompt more Conservative MPs to send letters to Graham Brady, the chair of the 1922 Committee, in a concerted bid to trigger a vote of no confidence. “These are discussions I know that colleagues will be having in Westminster,” he said.

If Brady receives 54 such letters, a vote of no confidence will be triggered – and if Johnson were to lose that vote, a leadership contest would be launched in which he would not be allowed to stand.

Senior Conservatives said that the mood in the House of Commons tea room on Tuesday was “funereal”, with MPs discussing who would replace Johnson. One MP said that Rishi Sunak, the chancellor, could be prime minister within months. “It is no longer a question of if the PM will go, it is when,” the MP said.

It has been claimed that Reynolds attended another alcohol-fuelled gathering for No 10 staff. The Daily Telegraph reported that he was among aides from Johnson’s private office who stayed late drinking on 18 December – the same night as a controversial press office party.

A No 10 spokesperson said of the event allegedly attended by Reynolds: “A number of private office staff worked late into the evening on the Covid response.”

The latest Tory backlash was sparked by a leaked email from Reynolds that invited colleagues to “socially distanced drinks” after “an incredibly busy period”. At the time, two people from different households – but no more – were permitted to meet outdoors in a public place at a distance of 2 metres, under England’s pandemic rules.

The junior minister Michael Ellis was sent out by Downing Street to parry MPs’ questions at an angry and emotional session in the House of Commons on Tuesday. The DUP MP Jim Shannon broke down in tears as he said his mother-in-law had died alone during lockdown, urging the government to ensure “full and complete disclosure” of what happened. 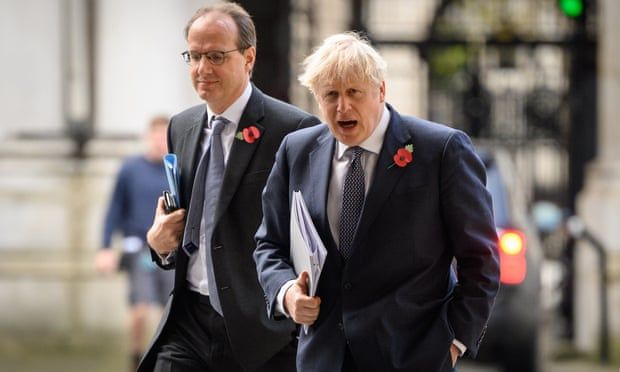 Boris Johnson with his principal private secretary, Martin Reynolds, who sent the email.

Ellis apologised “for the upset that these allegations have caused”. He confirmed that an inquiry by a senior civil servant, Sue Gray, would consider Downing Street gatherings on 15 and 20 May 2020 as well as the following Christmas, but sidestepped further questions.

The Labour leader, Keir Starmer, is expected to accuse the prime minister of misleading parliament about the gatherings when he faces him across the dispatch box on Wednesday.

When news broke of a No 10 Christmas party in 2020, Johnson told MPs: “All guidance was followed completely.” A few days later, when a video emerged of his former press secretary Allegra Stratton joking about a party, he said he was sickened and furious.

Ellis told MPs that Gray’s report would “establish the facts, and if wrongdoing is established, there will be requisite disciplinary action taken”. Asked whether Johnson would resign if he was found to have broken the law, Ellis said the prime minister was “going nowhere” and “retains the confidence of the people in this country”.

Senior Tory MPs called for Johnson to carry out a radical shake-up of the No 10 machine in the wake of the shock defeat in the North Shropshire byelection last month, but no changes have so far been announced.

A snap survey by pollsters Savanta ComRes found that two-thirds of the public think Johnson should resign after the latest revelations. Even among Conservative voters, the figure was 42%.

One Johnson loyalist said: “It would be the honourable, statesmanlike thing to at least say, ‘Look, I screwed up.’ He could do something about this. And the trouble is, he keeps leaving us all high and dry.” They added: “It’s really going tits up for him.”