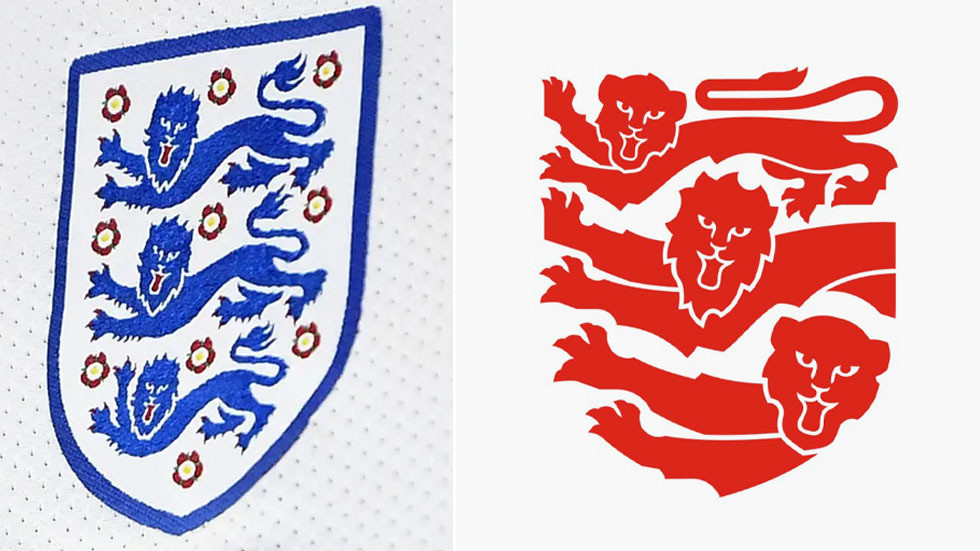 From lions to pussies: The English FA has scored a spectacular own goal by making its famed three lions crest go woke

The badge that has symbolised English football since 1863 is now a lion, a lioness and a lion cub, all in the name of greater inclusivity. But those bloodied lions actually represent something far from woke doctrine.

After months of no outrage from fans, weeks of not a single protest and a barrage of pretty much zero complaints, the Football Association (FA) has announced it has changed England’s famous three lions crest to a lion, a lioness and a cub.

“A cub, lion and lioness unite to form the new England Football crest with no boundaries,” the FA breathlessly announced in a Tweet. “Representing everyone at every level of football across the country.”

Righto. Except the lioness and the cub, of course, couldn’t actually get in the England squad that the nation cheers on at the World Cup or the Euros, on account of them being only for the best adult males (at the moment). They couldn’t all be on the same pitch at the same time, unless it was a kick around in the park.

That fresh family of woke lions too, they’re all red. That’s not very inclusive, all being one colour, is it? But they got the red bit right, because England’s three lions are actually a symbol of England’s bloodied and imperialist past.

Lions have never been a species native to England. They’ve never prowled these islands outside of a zoo. The three lions symbol all started around a thousand years ago with English Kings and English Queens – the most infamous being Richard the Lionheart. He had the heart of a lion, you see, meaning he was supposed to be masculine and fierce and brave. Not to mention bloodthirsty.

King Richard I, for those with no interest in English history – maybe those FA bosses should look into this a little deeper – was a ruthless crusader who marched on Jerusalem. The Crusades were a series of wars between Christians and Muslims over sites holy to both religions. And this Lionheart bloke beheaded more than 2,000 Muslim prisoners of war in 1191 after the fall of Acre, a town now in modern day Israel.

“The Three Lions are at the heart of England Football,” added the FA.“It symbolises progression, greater inclusivity and accessibility in all levels of the beautiful game; from grassroots to elite.”

Yeah? Tell that to those Muslim descendants of Sultan Saladin's army that had their heads lopped off. Many an Islamist will quote the Crusades back at anyone who enters those muddy and bloody waters. The state of Israel is still a dangerous powder keg due to those very same religious faultlines – it helped fuel Al-Qaeda and Islamic State.

And what about the nonsense at grassroots level for kids? That’s the Sunday afternoon games where the fat kid has to get a run on the pitch holding a bag of crisps and a Mars bar stuck in his mouth, all in the name of ‘inclusivity’. Even though, for sure, this kid would actually much prefer to be on the sofa holding his PlayStation controller and killing zombies.

When he tries to kick the ball into an open goal, he scuffs it and falls flat on his backside, to the outrage of the other kids on the team – those who can play a bit and really want to WIN!

If Lionel Messi or Xavi or Iniesta or Pep Guardiola had been forced to sit on the bench as kids to give the crap players a run at Barcelona’s famed La Masia finishing school for football greats, you can be damned sure they’d not be the players they became. Footballers, same as any discipline really, only get better by playing with and against people who are as good or better than they are. This, again, is simply nature.

A friend of mine’s 11-year-old son is a fabulous player and the other teams in his league have a way of cheating the system; they all try to put their not-very-good kids on the pitch at the same time, to try and create an actual healthy level of competition. It keeps the parents of the fat kid happy, if not the fat kid himself.

At least the famous Three Lions song won’t have to change. Every England fan knows this little ditty by comedians David Baddiel and Frank Skinner to a tune by the Lightning Seeds from the 1996 Euro finals. “Three Lions on a shirt, Jules Rimet still gleaming. Thirty years of hurt, never stopped me dreaming.”

It doesn’t quite have the same ring when you change the lyrics to ‘a lion, lioness and a cub on a shirt’, does it? It doesn't fit the beats. Maybe that’s why the England first team and the women's team – the Lionesses – will retain the badge that has been on shirts since a game against Scotland in 1872.

During the delayed Euros this summer, in which England will no doubt be hyped to a stratospheric level yet actually finish as mediocre also-rans, the crest on the shirts will remain as it always has been. Jules Rimet, to explain those lyrics, was a FIFA president whose name adorned the first World Cup trophy. Brazil kept it in 1970, as they won it for the third time (England, still, have only won the World Cup once – in 1966).

Okay, so? What’s the point in changing the crest? What’s it for?

Aha. It’s simply more woke work by those who have taken it upon themselves to control, rewrite and redesign the world on our behalf. It’s only a badge. Who cares, right? Well yeah. But this is the true nature and the true danger of the woke orthodoxy. It’s all done behind closed doors for the good of everyone by ‘people who know best’. They’ve already decided what the three lions represent, and it doesn’t matter what anyone else thinks.

And FA managers insist this three lion family will increase grassroots participation and diversity. Like, three lions on a badge for over 150 years was a block to this? I don’t get it.

Football fans never had a choice. What’s next? How about we change the lion and the unicorn on post-Brexit passports? Unlike lions, which actually do hunt on the plains of Africa, unicorns never existed in nature. They’re a figment of fertile English imaginations, the same as fairies. That lion would eat that tasty looking unicorn anyway.

Or how about two transgender football hooligans kissing, pint glasses in their tattooed hands?