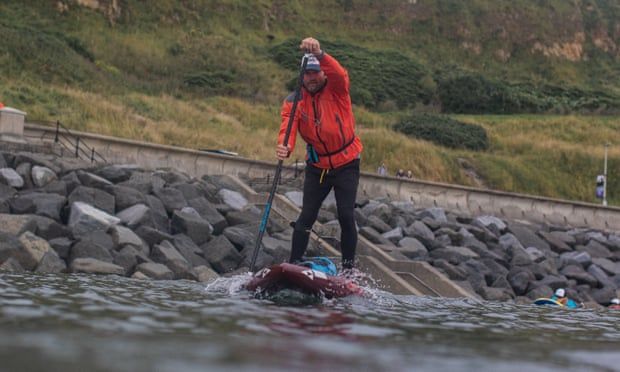 Former teacher to paddle into Torquay after epic voyage around Britain

Brendon Prince to become first to circumnavigate mainland on standup paddleboard, all to raise awareness of water safety

He has had close encounters with orcas, sharks and more dolphins than he could count. He has negotiated fierce tidal flows and picked his way through offshore windfarms, shipping lanes and busy ports.

After a 141-day adventure, Brendon Prince, a 48-year-old former teacher, is poised to become the first person to complete a circumnavigation of mainland Britain on a standup paddleboard, covering nearly 2,500 miles.

Prince, a father-of-three, paddled up to 16 hours a day, with the last leg on Tuesday a 25-mile trip along the Devon coast to his home in Torquay in relatively benign conditions.

“It feels great,” he told the Guardian as he paddled to his final destination on his board, which he nicknamed Scarlet after the elusive Scarlet Pimpernel (“They seek him here, they seek him there”). “There have been some challenging times when I’ve felt exhausted or fearful at a big swell or giant waves but it’s a matter of understanding the fear, channelling the fear and getting on with it.”

Prince began his trip at the end of April when, in his words, he turned right out of Torquay – and then headed clockwise around Britain. He estimates that he has plunged his paddle into the water 8m times.

It was all done in the spirit of adventure but also to raise awareness of water safety. Prince was an off-duty lifeguard when he took part in an attempt to save a group of holidaymakers who got into trouble in the water at Mawgan Porth, in north Cornwall, in 2014. Three of the visitors drowned.

From that day, he has made it his life’s mission to teach drowning prevention, founding the charity Above Water. Money raised during his circumnavigation will be used to develop a water safety app for schools. 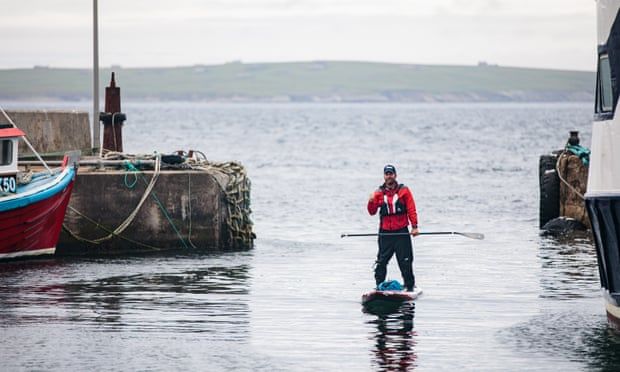 Coming into the harbour at John O’Groats.

He said: “The most important part of this whole adventure is to spread the important message of water safety and drowning prevention.” If just one child stayed safe when near water having heard about his feat, it would have been worthwhile, he explained.

Prince said the north was the coldest, the east the windiest, the south the most “gnarly” (which he defines as a state that leaves you feeling somewhere between feeling uncomfortable and feeling in danger), while the west was the wildest.

He saw the irony of doing something hazardous at sea to promote water safety. “There’s a balancing act. You’re doing something that has not been done before because it is dangerous and difficult. You have to have that level of experience to understand the risk.” He stayed out of the water on 22 of the 141 days because he deemed the conditions were not safe.

His brushes with sea life have been a highlight. A 2.4-metre long porbeagle shark cruised close to his board just off the Mull of Kintyre in the south-west of Scotland. Then he saw orcas three times on one day. “I fell in the first time I saw one and it glided on by – massive, majestic. Later one appeared in front of me. I turned around and there were two behind me. I felt like I was being hunted but when they realised I wasn’t food they went on their way.”

He saw dolphins on 60 consecutive days and never got used to gannets diving into the water centimetres from his board. “It made me jump every time,” he said. 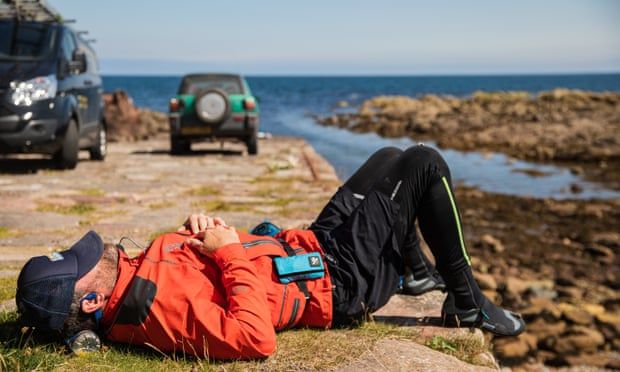 Brendon Prince has a quick snooze before getting back on the board to continue his daily paddle. P

Prince paddled without a support boat and the longest distance covered in a single day was 47 miles. The shortest, when the weather was particularly poor, was just over a mile.

Prince said paddling in human-made environments proved trickier than in natural ones. “Nature is easier to predict than humans,” he said.

As long as his record attempts are ratified, he will be crowned the first person to circumnavigate mainland Britain on a paddle board – and will take the world record for the longest ever journey on such a craft.

As he neared land, he was looking forward to a hot shower, a cup of tea, his own bed – and seeing his family. “It’s always about loved ones in the end.”