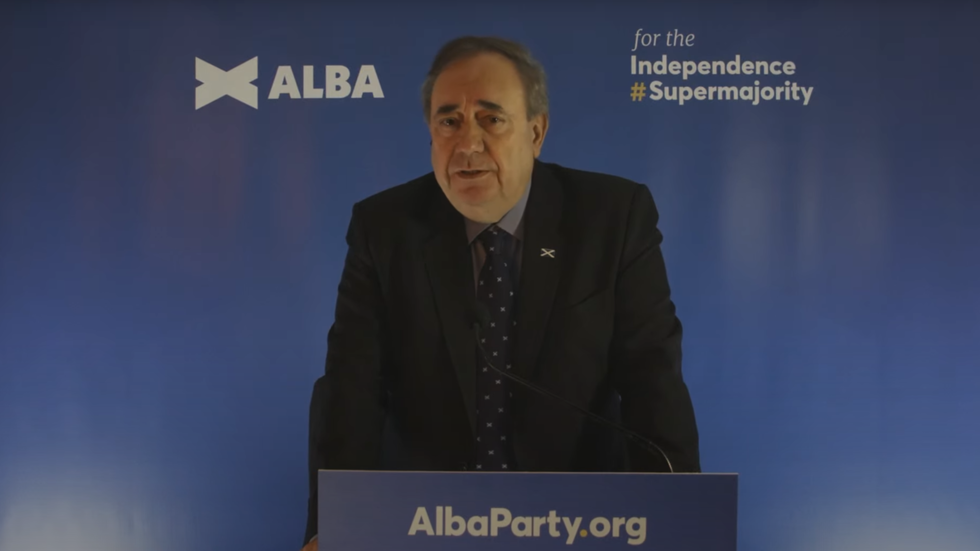 Alex Salmond has launched a new political faction to push for independence as the former Scottish National Party (SNP) leader plots legal action against the Scottish government’s handling of sexual harassment claims against him.

Speaking on Friday in a virtual press conference, Alex Salmond said he aims to build a "supermajority" for independence with the creation of the Alba Party (Alba is the Scottish Gaelic name for Scotland), which will stand for election at the Scottish Parliament elections in May.

“Over the next six weeks we will promote new ideas about taking Scotland forward – giving primacy to economic recovery from the pandemic and the achievement of independence for our country,” Salmond stated.

Salmond contended that as many as a million pro-independence votes could go to waste at the parliamentary elections in May, asserting that the creation of his new party could help turn those votes into seats and build a mostly pro-independence Scottish parliament.

“If Alba wins regional list seats the wasted votes end. The number of independence-supporting MSPs in the Parliament could reach 90 or even more,” the former SNP leader claimed.

Despite his much-publicised spat with the current SNP leadership, Salmond said that a majority of pro-independence parties could call on UK PM Boris Johnson to allow another referendum.

Salmond’s announcement comes as support for Scottish independence from the UK wanes from its highs of 2020. A Survation poll from mid-March said the country was split down the middle, with 51% favouring ‘no’ to independence.

Support fell for both independence and the SNP as Salmond and First Minister Nicola Sturgeon engaged in a very public spat over the mishandling of sexual harassment complaints against the former SNP leader. Earlier this week, Salmond said he would launch more legal action against the Scottish government.

Sturgeon’s handling of the pandemic has also been questioned as its case rate exceeds the rest of the UK, while PM Johnson receives the plaudits for a well-orchestrated inoculation campaign.

The first minister has said she would call for another independence referendum if she wins a majority in the May election. However, Johnson has already ruled out another referendum so soon after the last one.