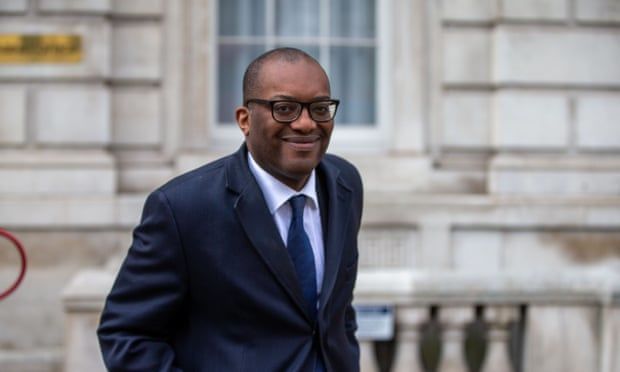 Foreign owners of UK properties to be identified in new register

Proposal, which dates from David Cameron era, intended to tackle money laundering but has no date set to take effect
Oligarchs and kleptocrats will no longer be able to hide their ownership of property through companies based in overseas territories, the business secretary said on Monday, but refused to give a date for when the change would come into force.

In a move brought forward by Russia’s invasion of Ukraine, Kwasi Kwarteng said there would be a register showing the ultimate beneficial ownership of foreign-owned UK properties – a move that was first promised under David Cameron.

He also revealed new powers to seize crypto assets under economic crime legislation that will be brought forward on Tuesday.

Kwarteng said the legislation would “send a clear warning to those who have or who are thinking about using the UK property market to launder ill-gotten gains, particularly those linked to the Putin regime.”

Labour welcomed the measures outlined by Kwarteng but criticised years of “government inaction”. Seema Malhotra, the shadow business minister, supported the measures “in light of the atrocities we are seeing in Ukraine”, but added: “He will know that Labour, and indeed some on his own side, have been calling for measures the government has announced for years.

“We were first promised this legislation in 2016, and in fact this draft legislation has been ready since 2018. While we support the government’s actions today, he needs to take responsibility for the time and progress lost through government inaction.”

However, a series of MPs expressed frustration that there was no immediate move to reform Companies House, the register of company ownership, which will only be discussed in a white paper.

Margaret Hodge, the Labour MP, said she was “dismayed that all we are getting is a white paper”, saying there was an extensive consultation a year ago giving plenty of suggestions for reforms to prevent wrong, missing and fraudulent records. Liam Byrne said it “was at best a half measure”, highlighting 11,000 shell companies where there is no person of significant control registered – and only 112 prosecutions.

MPs also raised concerns about the time it would take to set up the register of beneficial ownership of property, with Robert Jenrick, the Tory former cabinet minister, questioning whether people would be given up to 18 months to declare their ownership. James Murray, a Labour MP, called for owners to have to make declarations by the end of March this year. “Every day we waste now gives those benefiting from Putin longer to hide their dirty money elsewhere,” he said.

Kwarteng did not say when the deadline for declaration would be but he said he was working to get the register up and running within “a few months”. He said there was “plenty of scope” for MPs to lay amendments to the legislation if they wanted to.

The legislation will establish a new register of overseas entities requiring foreign owners of property in the UK to declare their true identity, in a move intended to ensure criminals cannot hide behind secretive webs of shell companies.

Those that fail to comply will have restrictions placed on selling the property, while those who are found to have broken the rules will face up to five years in prison.

The legislation will apply retrospectively to property bought by overseas owners up to 20 years ago in England and Wales and since December 2014 in Scotland.

The changes proposed for Companies House would give the registrar of companies new powers to maintain the integrity of the register – stamping out erroneous or fraudulent entries and tackling late filing of records.

The paper said the new powers would include those to “query suspicious appointments or filings and, in some cases, request further evidence or reject the filing” and more data sharing with law enforcement agencies.

It proposed that those setting up, managing, and controlling companies and other registrable entities will have a “verified identity” with Companies House, or have registered and verified their identity via an anti-money laundering supervised third-party agent.

The white paper said: “This will make anonymous filings harder and discourage those wishing to hide their company ownership through nominees or opaque corporate structures.”

However, it also suggested more privacy for those who own companies could be introduced, with the suggestion that the government “will also enhance privacy mechanisms across the register”.

Boris Johnson, who is travelling to Poland and Estonia on Tuesday, told G7 leaders that he welcomed the “unity of messaging” condemning Russia’s invasion in recent days.

A Downing Street spokesperson said: “The prime minister stressed the need for countries to continue supporting the Ukrainian government, including with the provision of defensive weapons. He also underlined the need for an international response to the emerging humanitarian crisis, including through supporting Ukraine’s neighbours to deal with large numbers of Ukrainians escaping violence in the country.”

He also stressed the need for Russia to be removed from the Swift payment system and further pressure to be applied on Putin’s regime.

“The leaders agreed to pursue every avenue to ensure that Putin fails in his ambitions,” the spokesperson added.
#Boris Johnson  #Johnson
Add Comment