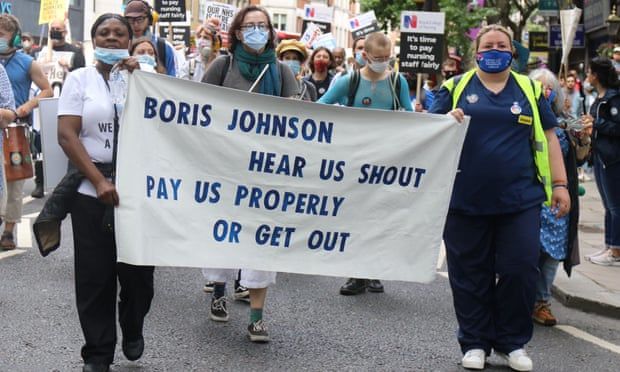 For an NHS burnt out from Covid, praise without a raise means little

Analysis: threat of industrial action and anger after workers’ herculean efforts risks a public, messy fight for No 10
After four months of the government insisting that it could afford only a 1% pay rise this year for the NHS staff whom Boris Johnson has often lionised, it has now trebled that to 3%.

The original 1% was rejected as an insult by unions representing the 1.2m NHS personnel in England. Conservative MPs worried that it made the government look ungrateful for frontline workers’ herculean efforts during the Covid pandemic, opinion polls suggested the public agreed, and health leaders warned that it would only increase the NHS’s debilitating problems in recruiting and retaining staff. Despite proclaiming that 1% was “as much as we can [afford] at this present time”, the prime minister has bowed to the inevitable.

But will 3% be enough to assuage staff anger and head off industrial action? That seems unlikely. A number of unions now intend to canvass their members’ views on the offer – and what, if anything, they are prepared to do to try to force an increase. They include the British Medical Association (BMA), the Royal College of Nursing (RCN), GMB and Unite. Across all types of staff, two groups look most likely to seriously consider taking action – nurses and junior doctors.

The legal duty on unions to ensure at least a 50% turnout in any ballot, and for 40% of their total membership to approve any industrial action – a work-to-rule or strike – is a high bar to get over. But nurses are so unhappy about the 3% award that it is almost certain that the RCN will end up balloting its members about action of some sort. It said nurses deserved a 12.5% increase and, significantly, has already not just rejected the 4% offered by the Scottish government but triggered the disputes procedure, a potential first step to a walkout.

Nurses in England admire their colleagues in Northern Ireland for striking in late 2019, earning strong public support and winning concessions from Stormont ministers as a result. Quite a few believe they can repeat the trick. Johnson could soon find himself in an awkward, ongoing and very public disagreement with nurses, some of whom he praised for their round-the-clock care that helped save his life while he suffered with coronavirus last year.

England’s 61,000 junior – or trainee – doctors may also weigh up the pros and cons of industrial action. Ministers point to the fact that trainees are in the third year of a four-year pay deal that gives them a 2% rise each year. In her initial reaction to the 3% award, Dr Sarah Hallett, the chair of the BMA’s junior doctors committee, called it “insulting”, but did not raise the spectre of any walkouts. However, some juniors are already asking why they deserve less than everyone else, and why they are missing out on the extra 1%, given that they have helped shoulder the Covid burden.

Ministers may proclaim their admiration for the NHS and boast of the record funding they are putting in. But a potential series of ballots among health unions over the coming weeks and months could well see Johnson embroiled in a messy battle for hearts and minds with the workers the public admire most.
#Boris Johnson  #Coronavirus  #Johnson  #Covid
Add Comment