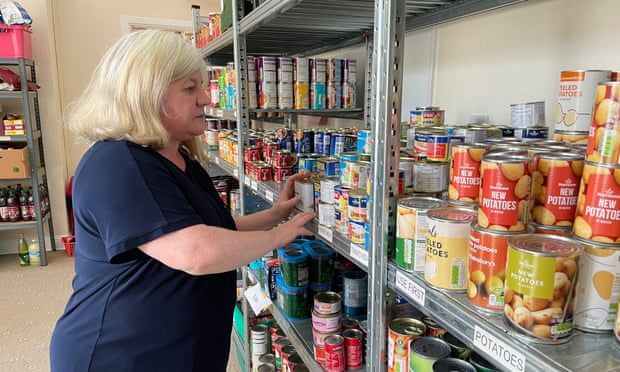 Exclusive: Nearly 70% of providers say they may need to turn people away or shrink the size of emergency rations
Food banks across Britain have warned of a “completely unsustainable” surge in demand that will prevent them feeding the hungriest families this winter.

Of the 169 providers, nearly 70% said they may need to turn people away or shrink the size of emergency rations this winter. Almost three-quarters said food donation levels had dropped since April, despite the spiralling demand.

The warning came amid alarming new forecasts about spiralling inflation, with pressure growing on Liz Truss, Boris Johnson’s likely successor as prime minister, to give some indication of how she intends to deal with the cost of living emergency.

Figures published on Wednesday show shop prices rose by a record 5.1% in August as the war in Ukraine raised costs for farmers.

The shop price inflation was led by a 10.5% rise in fresh food prices, according to new data from the British Retail Consortium and market research firm NielsenIQ. That’s the highest rate since September 2008, when the global financial system was on the brink of collapse.

The US investment bank Goldman Sachs also warned on Tuesday that inflation in the UK could top 22% next year, close to the post-war record set in 1975, if wholesale energy prices remain at current high levels, heaping more pressure on households and businesses.

In one glimmer of hope, UK gas prices dropped by more than 20% on Tuesday, amid reports that efforts to fill European gas storage before the winter appear to be ahead of schedule.

However, while prices eased from near record highs, they are still 12 times higher than before the energy crisis began, and neither Truss nor her leadership rival, Rishi Sunak, have set out how they intend to mitigate the crisis for millions of people this autumn and winter.

The shadow work and pensions secretary, Jonathan Ashworth, said: “When even food banks are warning they may need to shut up shop this winter because they can’t meet the demand, we know the country is heading for a catastrophe without action.

“Families and pensioners are beyond desperate for real help now. Labour would freeze energy bills but instead we have Boris Johnson on a vanity tour, the chancellor on a New York jolly, and Liz Truss hiding from scrutiny because she has no answers to this crisis whatsoever.”

In the survey by the Independent Food Aid Network UK (Ifan UK), nearly 90% of the organisations representing 169 food banks said demand had risen since April and 87% said they had been hit with supply issues.

One in five had already reduced the size of food parcels and more than half of the charities had already had to dip into their limited cash reserves to bulk out food parcels.

Kirkcaldy Foodbank in Scotland said it had a deficit of £56,000 in the first half of 2022 due to rising food prices and plummeting donations, as those who usually give to food banks are themselves cutting back.

It said: “This situation is completely unsustainable, and we have begun to take steps to limit the support that we can provide.

“We have real fears about what lies ahead – both for the people who need our help and for our ability to meet those increased needs.”

Su Parrish, of the Easter Team charity in Crawley, said she feared they would see “poor mental health spiralling and potentially suicides as a result of the stress and distress people are now experiencing”.

The poll was conducted before the regulator Ofgem announced the energy price cap would increase by 80% from October. The decision will take the average gas and electricity bill from £1,971 to £3,549 a year and may push millions of homes into fuel poverty.

Simon Lellow, operations manager of Telford Crisis Support, said the cost of living crisis was a “clear and present danger” to many people in the Shropshire town.

He said: “The effects are already deepening the existing issues surrounding poverty and the need for food banks and other charitable welfare support services.

“With the most recent energy price increases, rate of inflation and lack of countermeasures, the outlook for the final quarter of the year is bleak and disturbing.”

Ifan UK, which supports more than 550 food banks across the country, has urged the government to introduce “urgent, cash first interventions” to ensure people can afford to put food on the table and heat their homes this winter.

Truss has pledged to make £30bn in tax reductions if she replaces Johnson as prime minister in a vote of Tory members next week.

She is also said to be considering increasing the personal allowance, the level at which people start paying tax, and exploring VAT cuts of up to 5 percentage points.

Truss has previously ruled out giving “handouts” and her allies have said any support package would be unlikely to include one-off payments – raising concern that her measures will not help those who need it most.

Sonya Antoniou-Pamment, of the south-west London-based charity Olive Branch Aid, said: “Like many organisations we know that the coming months as winter begins to bite will be the hardest one yet for many. We also know that our volunteers will find it difficult as we will only have resources to be able to help a fraction of the people we are expecting to see in difficulties this winter.”

Sabine Goodwin, a co-ordinator of Ifan UK, said relying on overburdened food banks was “unconscionable and unsustainable”. ​​ She said: “It’s for the government to ensure the basic needs of its citizens are met, not food aid charities buckling under the strain.”
#Boris Johnson  #Johnson
Add Comment