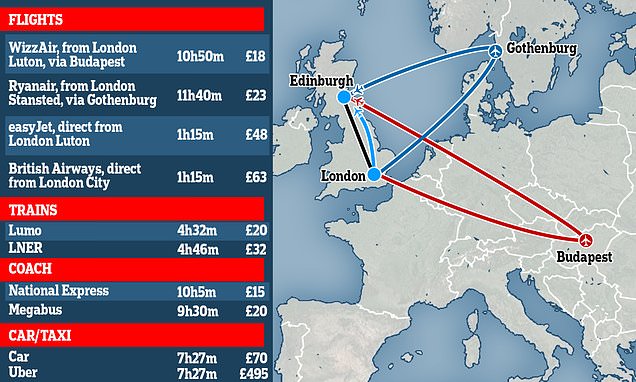 The low-cost train fares on Lumo will be competition to London North Eastern Railway's slightly faster service on the East Coast Mainline, and will be more in line with the cost of coach travel.

Rail passengers today began snapping up tickets on a new budget rail service called Lumo - with fixed-price advance fares from London to Edinburgh costing less than £20 when it launches next month.

But, incredibly, it is still cheaper to fly between the English and Scottish capitals via Budapest with WizzAir from Luton Airport for £18, or only slightly more to go with Ryanair from Stansted via Gothenburg for £23.

The low-cost train fares will provide competition to London North Eastern Railway's (LNER) slightly faster service on the East Coast Mainline, and will be more in line with the cost of National Express or Megabus coaches.

Lumo is being launched by Aberdeen-based multi-national transport company FirstGroup and will be run as an 'open access' route - an arrangement similar to that of Grand Central and Hull Trains which also operate services on the same line. The idea is to bring in competition that benefits passengers with lower prices and more choice.

Lumo trains are set to begin running on October 25 with all single fares between London and Edinburgh costing £19.90 as a launch deal until December 1, and they will not go up in price as long as they are booked in advance.

This price is less than half that of the cheapest direct flight to Edinburgh Airport on the same day with easyJet from Luton which is £48, while the least costly British Airways route is a £63 service from London City. 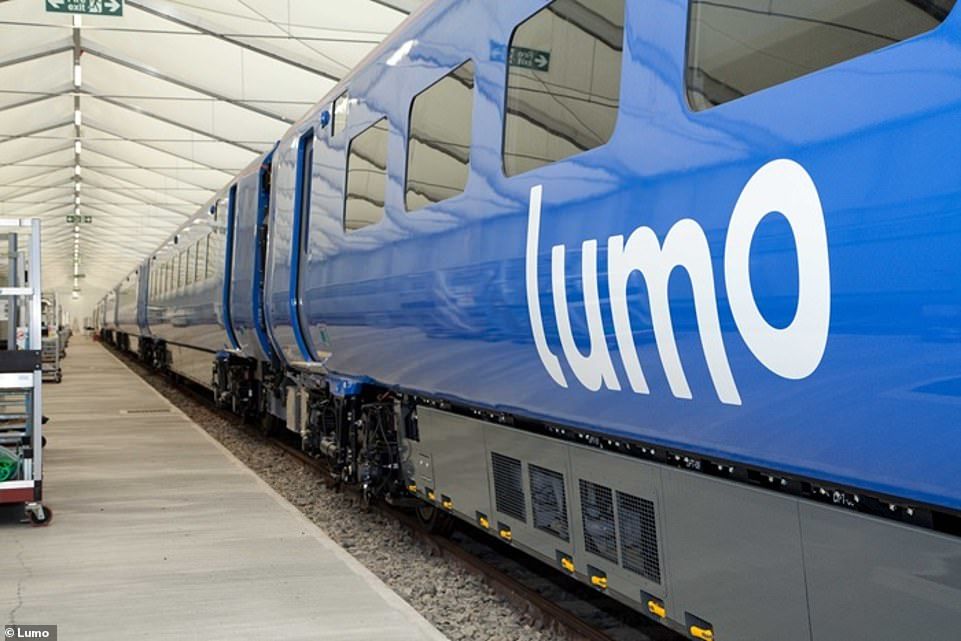 From next month, a budget rail service called Lumo will offer train fares from London to Edinburgh for less than £15 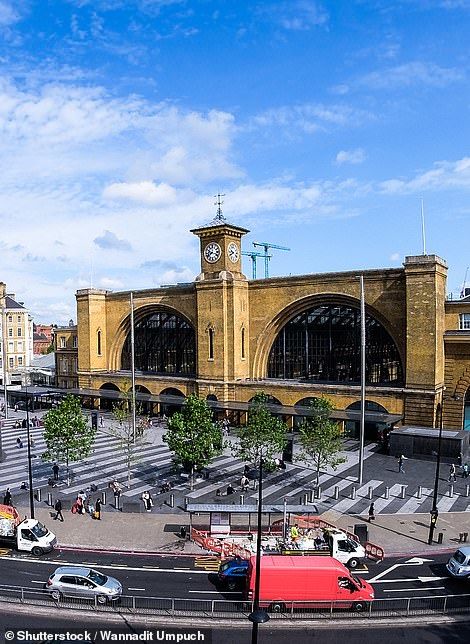 A National Express coach leaving on the morning of October 25 is £15, while a Megabus coach is £20. Both of these will take around ten hours – more than double the time of the train, which is four-and-a-half hours.

A car will cost about £70 in petrol and take seven-and-a-half hours on the road without taking stops into account.

While the Lumo launch fare of £19.90 is now live, there will be a limited number of £14.90 fares also on offer - with these set to be available within the next few days.

More of these fares will become available once sales for Lumo services in December and beyond go live.

On Lumo, there will be no first-class carriages, nor buffet cars.

Instead passengers can order food and drink via a smartphone app to be delivered to their seats, or wait for the traditional on-board trolley to rattle past.

Single fares between King's Cross and Edinburgh will start at £14.90, both on and off-peak. The cheapest return will cost £29.80.

The ultra-low fares have to be booked in advance, but will be available up until a day before travel.

At the moment, all single fares between London and Edinburgh are costing £19.90 as a launch deal from October 25 to December 1, and will not go up in price as long as they are booked in advance.

By comparison, an off-peak single fare booked ahead on the existing Edinburgh service costs about £70, according to the National Rail Enquiries website.

Despite Lumo's low prices, the journey will take four-and-a-half hours, only about ten minutes more than LNER's fastest service on the East Coast Mainline.

Lumo is owned by FirstGroup, which currently runs trains on the West Coast Mainline.

It wants to cash in on leisure rail travel, which bounced back to pre-pandemic levels much faster than the commuter market.

The company said it also wants to undercut airlines as a more carbon-friendly and cheaper option.

If they flew British Airways from Heathrow to Edinburgh, they would have paid about £150 for the privilege. The new service will bring Lumo into direct competition with LNER. 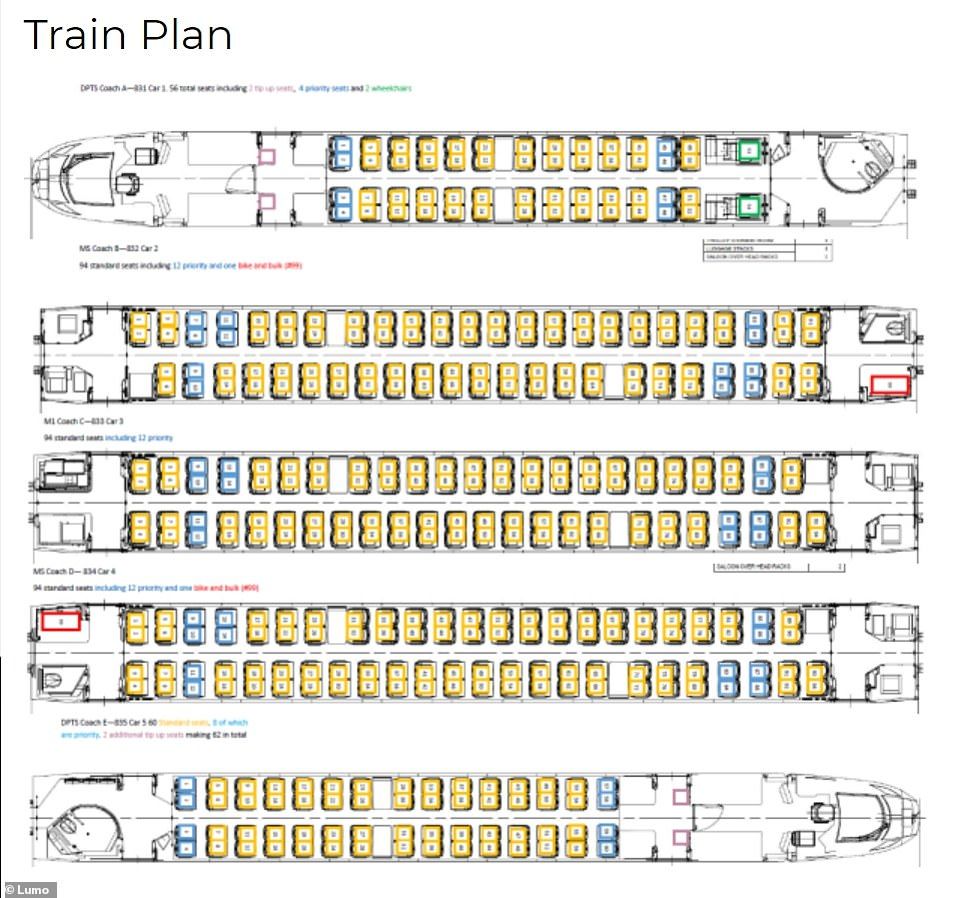 Lumo will have five Hitachi Class 803 trains all built with five carriages each with 400 seats on board, as shown in this layout 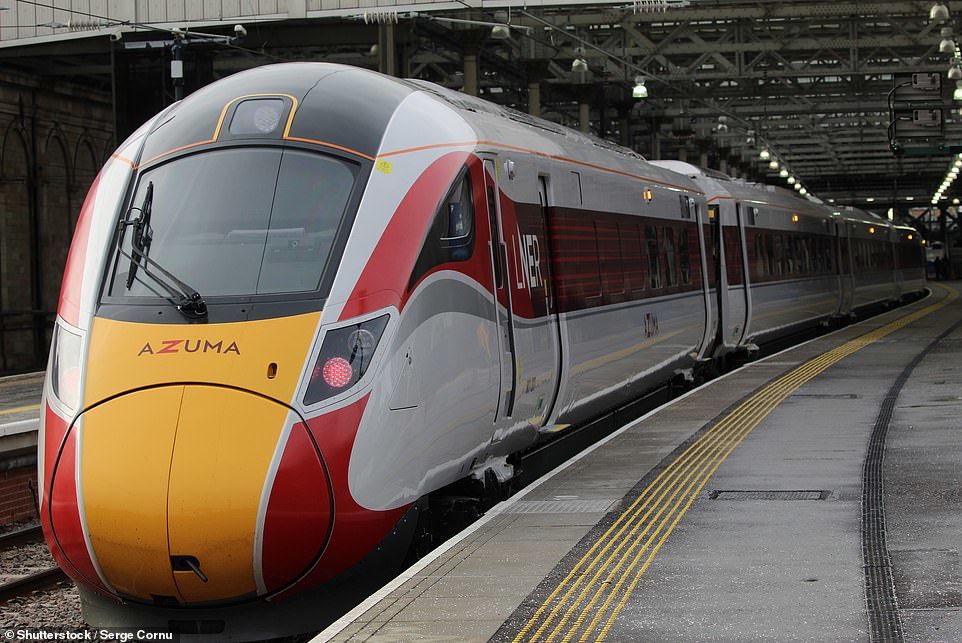 There will be two services a day each way to start with, increasing to a maximum of ten by early next year.

Trains will call at Stevenage, Newcastle and Morpeth, compared with four stops, starting in York, on the fastest LNER service.

Lumo's fares between London and Newcastle will start at £11.90 and £6.90 for the Newcastle to Edinburgh leg.

It stressed that despite having only one class of carriage, passengers would have 'optimised' leg room and larger tray tables.

Other benefits include free on-board wifi, while passengers can order food before boarding from popular high-street brands.

The network will have five Hitachi Class 803 trains all built with five carriages each with 400 seats on board and two priority seats per carriage.

The trains have a top speed of 140 mph, but this is limited to a maximum line speed of 125mph.

Helen Wylde, managing director of Lumo, said: 'Travelling in the UK should not cost a fortune and it certainly shouldn't be the planet that pays.

'The reasons people choose different modes of travel are changing. People are now considering their impact on the environment very carefully. They also expect better service and catering.

'Lumo is a new rail travel experience that is kinder to the planet and better value for passengers, while never compromising on service.'

Lumo also stressed that, despite only having one class of carriage, it would be of a standard that ensures that everyone is in ‘good seats’ with ‘optimised’ leg room and larger tray tables.

Its app, LumoEats, will allow passengers to order food before boarding from high-street brands, with it delivered to their seat, as well as from an on-board trolley. There will also be on-board free Wi-Fi and paperless ticketing.

The operator is looking to cash in on the leisure rail travel market, which has bounced back to pre-pandemic levels and even exceeded them much quicker than the commuter market.