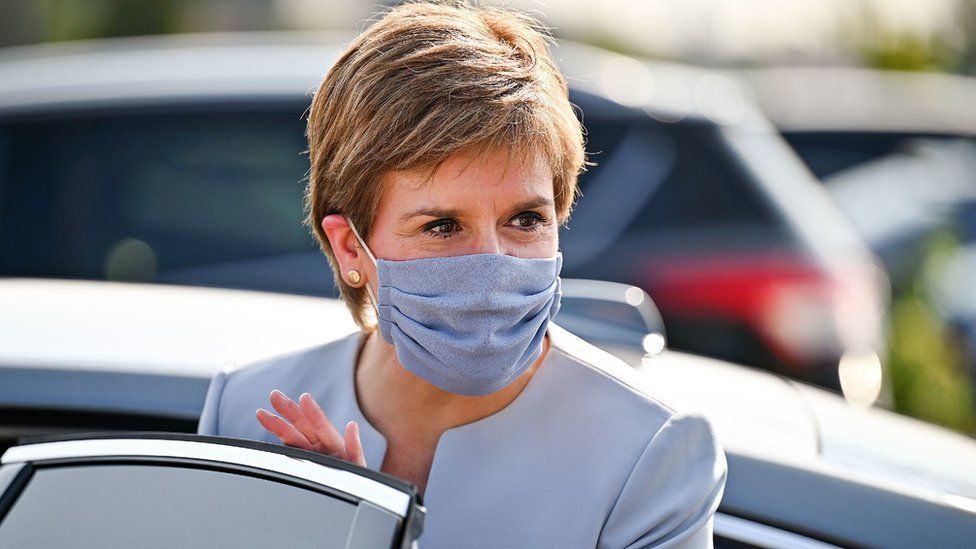 Scotland's first minister has tested negative for Covid-19 after being notified that she had been in close contact with someone with the virus.

Nicola Sturgeon had gone into self-isolation on Sunday after being contact traced by NHS Test and Protect.

However she has now said that her own PCR test has come back negative - meaning she no longer needs to isolate, as she has had two doses of vaccine.

National Clinical Director Prof Jason Leitch told the BBC that Ms Sturgeon was "well" and did not have symptoms.

In a tweet posted on Sunday, the first minister said she had been "identified as a close contact of someone who is positive for Covid".

She said she was self-isolating pending a PCR test result "in line with the rules", and thanked NHS Test and Protect staff.

And in a further tweet on Monday morning, Ms Sturgeon said she was "relieved to report that my PCR test is negative".

Under Scotland's Covid-19 rules, she is able to exit quarantine as she had her second dose of vaccine more than two weeks ago.

However the SNP leader said she would continue to regularly take lateral flow tests as an "added precaution", and encouraged others to do likewise.

The news that Ms Sturgeon was isolating came on the day that Scotland recorded a new record number of daily Covid cases.

The number of hospital patients rose to a total of 507, with 52 in intensive care.

Ms Sturgeon said it was "reassuring that vaccines are preventing the levels of serious health harms that case numbers like this would once have caused".

The first minister is likely to make a statement to MSPs later in the week about the current state of the pandemic, as well as setting out the terms of her government's power-sharing deal with the Scottish Greens.

Last week she said the sharp rise in cases was a "cause for concern" - but that the Scottish government was not considering the introduction of a circuit breaker lockdown.

She stressed the importance of everyone "playing their part" in halting the spread of the virus.

She has said that the government cannot rule out the reintroduction of some curbs if needed - but that no-one wants to "go backwards" to even limited restrictions.