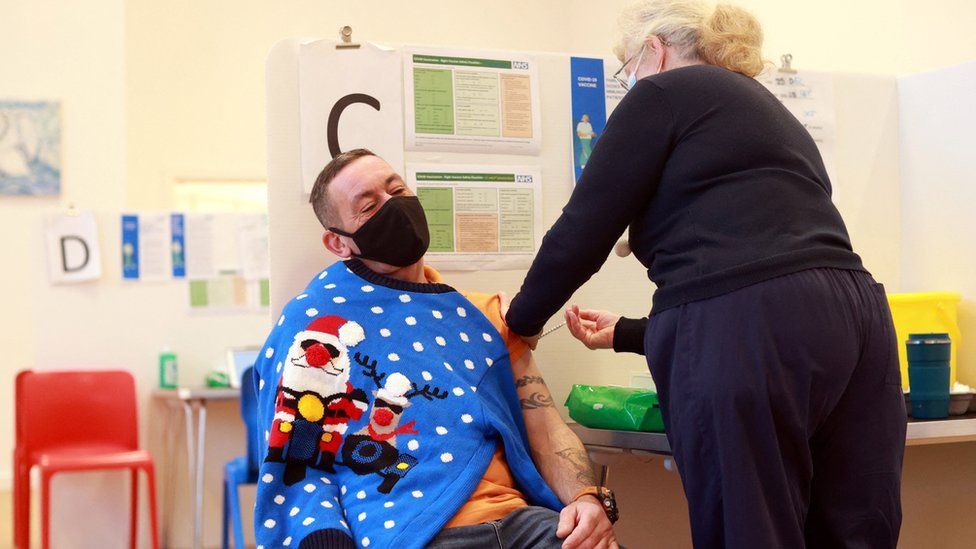 Amid the much-publicised drive to give booster jabs to one million Britons a day, thousands more people came forward for their first or second Covid vaccines last week.

UK-wide, the daily vaccination figures were at their highest for six weeks.

The same week saw more over-60s get their first Covid jab than during any seven-day period since the beginning of June.

The figures come as the NHS continues its push to meet the government's accelerated booster rollout - with the aim to offer every eligible adult in England a booster by the end of the month.

Scotland and Wales also aim to offer booster appointments to all eligible adults before the end of the year, while last week Northern Ireland's booster programme opened to over-18s who received their second dose at least three months earlier.

More than 32 million boosters and third doses have now been given in the UK, amounting to 56% of the population aged 12 and over.

An early analysis of British Omicron and Delta variant cases by the UK Health Security Agency found that two doses of a vaccine were less effective at stopping Omicron, but a third or booster dose prevented around 75% of people from getting any Covid symptoms.

NHS England said it expected to give thousands of first, second and booster doses on Christmas Day, with volunteer vaccinators across England working during the festive period to get jabs in arms.

Vaccination centres are not open in Scotland, Northern Ireland, or Wales on 25 or 26 December.

The government and NHS England have launched an advertising campaign for the expanded booster programme, urging the public to "Get Boosted Now".

Health Secretary Sajid Javid said it had "never been more vital to get your jabs" and called the recent increase in first and second doses "excellent".

Vaccination appointments continue to be available during the festive period. Extra vaccine centres and pop-up sites have opened, while a total of 750 armed forces personnel have been drafted in to help with the booster rollout.

There are roughly 3,000 vaccination sites around the country, with further pop-up sites due to be opened in the most accessible places for local communities.

The Department for Levelling Up, Housing and Communities announced last week that it would give £22.5m to councils to encourage people to get vaccinated in the run-up to Christmas - with community vaccine champions set to target 60 local authorities with the lowest vaccine uptake.

Figures issued on Friday by the Office for National Statistics estimate 1.74 million people in the UK had coronavirus on 19 December, up by more than 368,000 on the figure three days earlier.