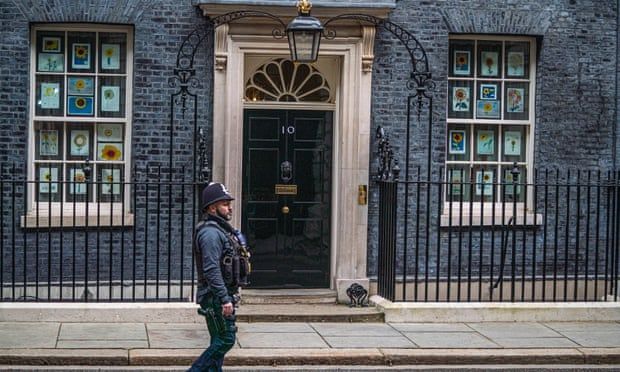 Exclusive: fixed-penalty notices handed out over events held at No 10 on 16 April 2021

Downing Street staff have been issued with fines by police over a party that took place the night before Prince Philip’s funeral, in the first decision by Scotland Yard that Covid laws were broken inside No 10 at the heart of government.

After the Guardian revealed that fixed penalty notices were handed out to those who attended a leaving do for an aide to Boris Johnson in the Cabinet Office in June 2020, sources said those who partied into the early hours in No 10 on 16 April 2021 had also been warned they would receive fines.

The event caused consternation due to the contrast between it and the Queen’s strict adherence to social distancing rules by sitting alone at the funeral of her husband of 73 years.

Meanwhile, Downing Street staff were said to have got so drunk that they broke the swing used by the prime minister’s son, Wilf, in the No 10 garden, while a staff member was sent out to a local supermarket to pack a suitcase full of wine and another acted as a DJ.

Two parties took place that evening – one to mark the departure of Johnson’s director of communications, James Slack, and another for one of Johnson’s personal photographers.

At the time, England was in step two of the strict roadmap out of lockdown, meaning all indoor mixing was banned.

Many of those who partied in No 10 on 16 April were sent questionnaires by the Met asking them to provide a reasonable excuse for their attendance.

But in an email, the Operation Hillman team investigating the string of lockdown-busting events told some of them that it had been “assessed that there are reasonable grounds to believe that you committed an offence in contravention of the regulations”.

The notification, which was received by some late last week, added: “In light of this, you are to be reported for the issuance of a fixed penalty notice (FPN), offering you the opportunity of discharging any liability to conviction for the offence by payment of a fixed penalty.”

The Met said further correspondence confirming the details of the fine would be sent by ACRO – the criminal records issuing office.

Downing Street declined to comment. No 10 apologised to the Queen in January after details of the parties were reported.

The apparent confirmation that Covid laws were broken inside No 10 will lead to further questions over whether Johnson misled parliament about the dozen parties under investigation.

He told Keir Starmer during prime minister’s questions on 1 December 2021: “What I can tell the right honourable and learned gentleman is that all guidance was followed completely in No 10.”

Meanwhile it also emerged that Helen MacNamara, the Cabinet Office’s then head of ethics, had attended the June 2020 leaving do for No 10 aide Hannah Young. It is understood she supplied a karaoke machine that was used at the gathering by revellers until the early hours.

Three sources also told the Guardian there was a drunken brawl at the event, held in the office of Mark Sedwill, who was cabinet secretary at the time. The Telegraph reported that MacNamara had been fined, while ITV said Johnson would not be interviewed by the police.

Scotland Yard said it would not confirm which events fines had been issued for, or the identity of anyone who received a fixed-penalty notice.

A spokesperson for the Met told the Guardian: “Unlike other incidents of Covid regulation breaches, the investigation under Operation Hillman remains ongoing, and as such we are not releasing further information at this time.

“At its conclusion, we will review what information can be released whilst still working to the NPCC [National Police Chiefs’ Council] principle of not releasing information that will lead to any individual being identified.”

Daisy Cooper, deputy leader of the Liberal Democrats, said the revelation that fines were to be issued for the 16 April 2021 event “confirms what the British public have known all along” – that Johnson was “a liar and must resign”.

She told the Guardian: “The emotional images of the Queen sitting alone at her husband’s funeral were the hallmark of the British spirit through the pandemic.

“Boris Johnson’s Downing Street didn’t show an ounce of respect for this country. There can be no more cover-ups and no more lies. For the good of the country, and for all those who lost loved ones during the pandemic, he must go.”

It is believed the fines handed out to those who attended the 16 April 2021 party were among the initial tranche of 20 announced by the Met on Tuesday.

The only two people No 10 have committed to identifying if they are fined is Johnson and the cabinet secretary, Simon Case, who had to be recused from leading the internal Whitehall partygate investigation after it was discovered a gathering was held by his team in December 2020.

A Labour frontbencher on Sunday called for everyone fined to be publicly named.

Jonathan Reynolds, the shadow business secretary, told Sky News that anyone who is issued with a fine – including the prime minister’s wife, Carrie Johnson – should have their identify made public.

“I think anyone who’s been in Downing Street should be named if they have been part of this.

“Because there’s been so much dishonesty, so much obfuscation from the people at the top in Downing Street, from the prime minister and his immediate circle downwards, I think people just want to know what really went on. Let’s have some transparency, let’s have some honesty.”