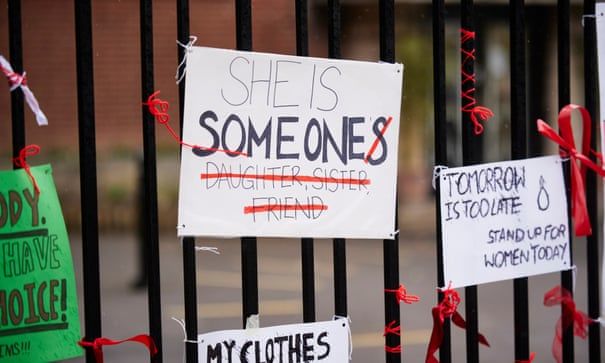 Fewer than one in 60 rape cases recorded by the police last year resulted in a suspect being charged, analysis of Home Office figures seen by the Guardian reveals.

The figures will increase pressure on the government to deliver radical proposals to overhaul the treatment of rape by the criminal justice system in a long-awaited end-to-end review into how rape is investigated and prosecuted in England and Wales.

Commissioned two years ago, it was planned to be completed in spring 2020, but was pushed back as more research was carried out and a legal case against the Crown Prosecution Service was heard.

The justice secretary, Robert Buckland, told MPs last week it would be published “before the end of spring”. The Guardian understands it was due this week, but will now be published in June as wrangling continues over how far the proposed actions to tackle record low rape charges and convictions should go.

According to Guardian analysis, more than 100,000 rapes have been reported to police since the review was announced in March 2019, following concerns about a precipitous drop in the volume of rape cases being prosecuted. Separate independent judge-led reviews in Northern Ireland and Scotland have already published their findings and made hundreds of recommendations.

The England and Wales review, overseen by the Criminal Justice Board, includes input from, among others, the Home Office, the Ministry of Justice, the attorney general’s and the Cabinet Office, Downing Street, the Crown Prosecution Service, the judiciary as well as police, charities and relevant inspectorates.

The victims’ commissioner, Vera Baird, said: “Bearing in mind that independent reviews in both Scotland and Northern Ireland have called for radical measures, we now can’t have anything less in a review in large part produced by the very agencies whose performance is in question.” 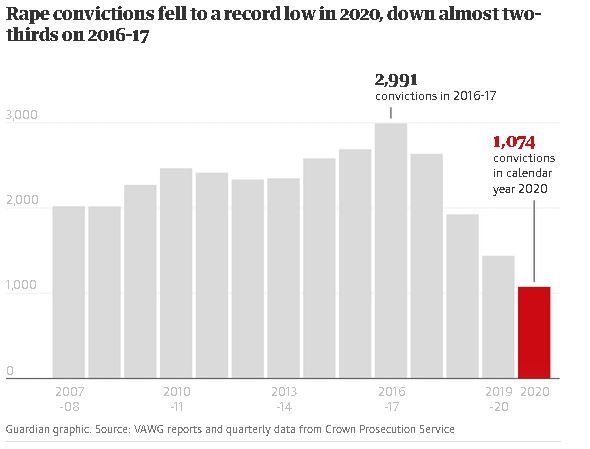 The figures come as fears mount about the growing backlog of cases in the criminal courts, with experts warning that the already high drop-out rate for rape victims is likely to increase. The number of victims dropping out of increasingly lengthy investigations and trial processes have rocketed from 25% five years ago to 43% in 2020.

Last week, Labour said the government should be held to specific targets to measure progress on male violence, domestic abuse and sexual violence, and said they would introduce a seven-year minimum sentence for rape. It proposed a national rollout of the system operating in Wales, where the government is held to account by 10 progress indicators, with a report published each year.

The Gillen review, published in May 2019, examined the treatment of serious sexual offences in Northern Ireland and made about 250 recommendations, including legal representation for rape complainants, while the Dorrian review in Scotland recommended the introduction of specialist rape courts in March 2021.

The England and Wales review is expected to recommend allowing rape victims to provide pre-recorded evidence before trial, barring the public from the courtroom more often and ensuring police return mobile phones to victims within 24 hours.

Wera Hobhouse, justice spokesperson for the Liberal Democrats, who carried out the analysis on charging rates, said the figures made clear that the criminal justice system was failing women.

“Through its inaction, this Conservative government is letting down survivors of sexual violence and allowing criminals to walk free,” she said. “Ministers must publish the end-to-end review of rape cases without any more delay. We urgently need improvements across the whole justice system, including specific training for police, prosecutors and judges on how to handle these cases sensitively.”

A government spokesperson said: “Victims of rape deserve to know that their cases will be taken seriously and everything will be done to bring offenders to justice. That is why we are reviewing the response to this horrific crime, in consultation with survivors’ groups and experts across the sector, and will set out next steps in due course.”

The Crown Prosecution Service – which since 2010 has had their budget cut of 25% and a 30% reduction in staff – has also updated its legal guidance for crown prosecutors. The first full revamp of the strategy since 2012 includes advice on the impact of trauma, pursuing an offender-centric approach in prosecuting rape and serious sexual offences (Rasso), and updated guidance on rape myths and stereotypes.

Siobhan Blake, CPS lead for Rasso prosecutions, said “At the CPS, we are determined to reverse the drop in rape and sexual offence cases going to court. Too few victims are seeing justice, and we want to change that.

“These cases are some of the most challenging and sensitive to prosecute, but we are committed to improving every aspect of how they are handled.”