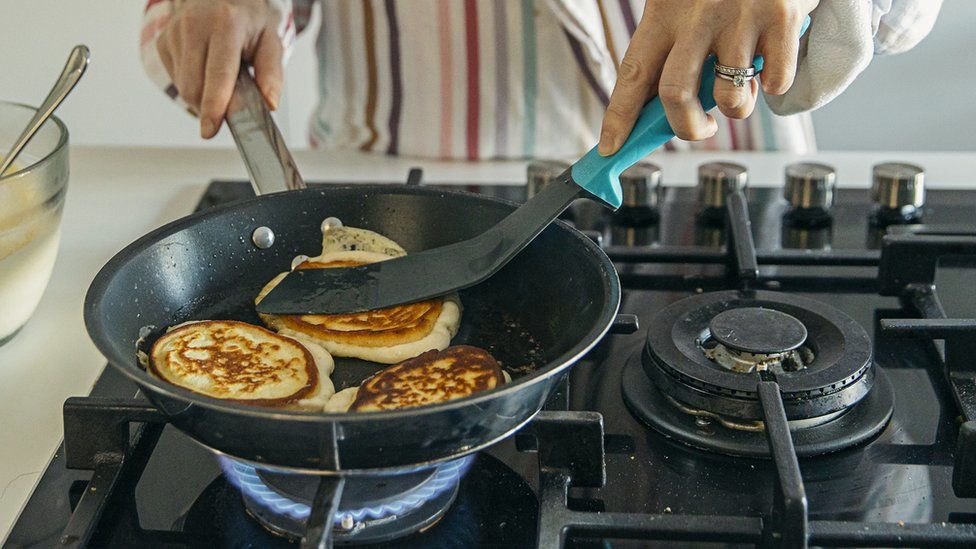 Every household to get energy bill discounts of £400 this autumn

Every household in the UK is to get an energy bill discount of £400 this October as part of a package of new measures to tackle soaring prices.

The poorest households will also get a payment of £650 to help with the cost of living, Chancellor Rishi Sunak said.

It follows warnings that millions could be left struggling if energy prices rise again in October as expected.

Mr Sunak said he had offered "significant support" for households who were facing "acute distress".

The package of new measures, worth £15bn in total, will also offer more targeted help to pensioners and the disabled.

The cost will be partly offset by 25% windfall tax on oil and gas firms' profits, which have soared in recent months.

It comes a day after Sue Gray's critical report into lockdown parties in Downing Street and follows intense pressure on the government to do more to help people with the cost of living crisis.

Paul Johnson, director of the Institute for Fiscal Studies think tank, said the support was a "genuinely big package".

"Put these benefit increases alongside the tax rises just implemented, and Mr Sunak is engaging in some serious redistribution from rich to poor - albeit against a backdrop of rising inequality."

Mr Sunak said the government had "a collective responsibility to help those who are paying the highest price for the high inflation we face."

*  Eight million households on means-tested benefits will get £650 paid directly into their bank accounts in two lump sums - one in July, the other this autumn

*  The emergency Household Support Fund, which is allocated by councils in England, will be extended by £500m to £1.5bn. The devolved governments will receive equivalent funding.

Earlier this week, UK energy regulator Ofgem said the typical household energy bill was set to rise by £800 in October, bringing it to £2,800 a year. Bills had already risen by £700 on average in April.

Households will still face rises in bills even with the further government support and Mr Sunak told the BBC the new measures will have a "minimal impact" on inflation.

The prices of food, fuel and other goods have surged in recent months, pushing inflation - the rate at which prices rise - to a 40-year high.

Mr Sunak blamed the war in Ukraine, recent lockdowns in China and the post-pandemic recovery for the surging prices. But he said the situation had "evolved and become more serious" pushing the government to act.

Under the new measures, the government will scrap a plan to give everyone in England, Scotland and Wales £200 off bills from October which would be repaid over five years.

While the £400 discount should be UK wide, the lack of an Executive at Stormont in Northern Ireland means people there must wait before they find out when will they receive the discount.

The measures add to around £17bn of support already given by the government. This included one-off £150 council tax rebates for most homes in England and Wales and matched funding for the other devolved nations. 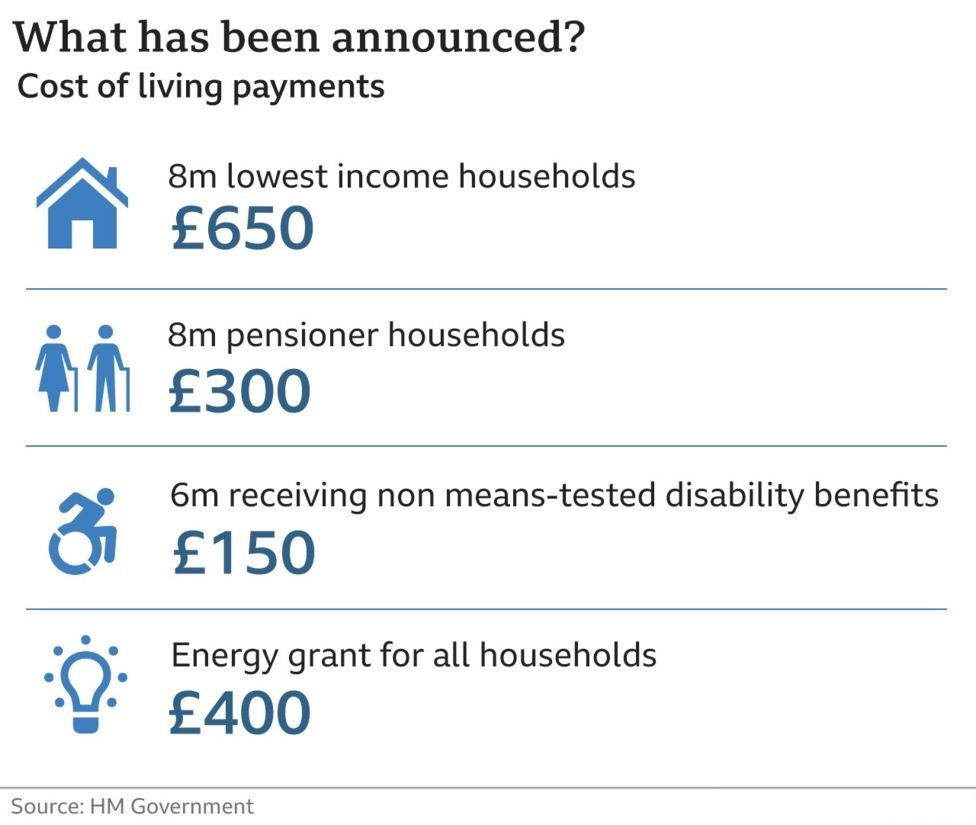 The government has until now rejected the idea of a windfall tax on energy firms' profits, saying it could deter investment in the UK.

But Mr Sunak said the oil and gas sector was "making extraordinary profits" and that he was "sympathetic to the argument to tax those profits fairly".

He said the tax would raise about £5bn this year and be scrapped when oil and gas prices - which have surged recently - return to more normal levels.

However, in seeking a "sensible middle ground" energy suppliers will be able to apply for tax relief of 90p for every pound they invest in UK oil and gas projects.

Mr Sunak said he also believed there was a case for taxing electricity suppliers more, announcing a consultation on the idea.

Rachel Reeves, Labour's shadow chancellor, said: "After five months of being dragged kicking and screaming, the chancellor has finally come to his senses, U-turned, and adopted Labour's plan for a windfall tax on oil and gas producer profits to lower bills."

But business lobby group the CBI warned the windfall tax would be damaging to investment needed for Britain's "energy security and net zero ambitions".

Oil giant BP said the new tax was a "a multi-year proposal" rather than a "one-off tax". "Naturally we will now need to look at the impact of both the new levy and the tax relief on our North Sea investment plans," it warned. 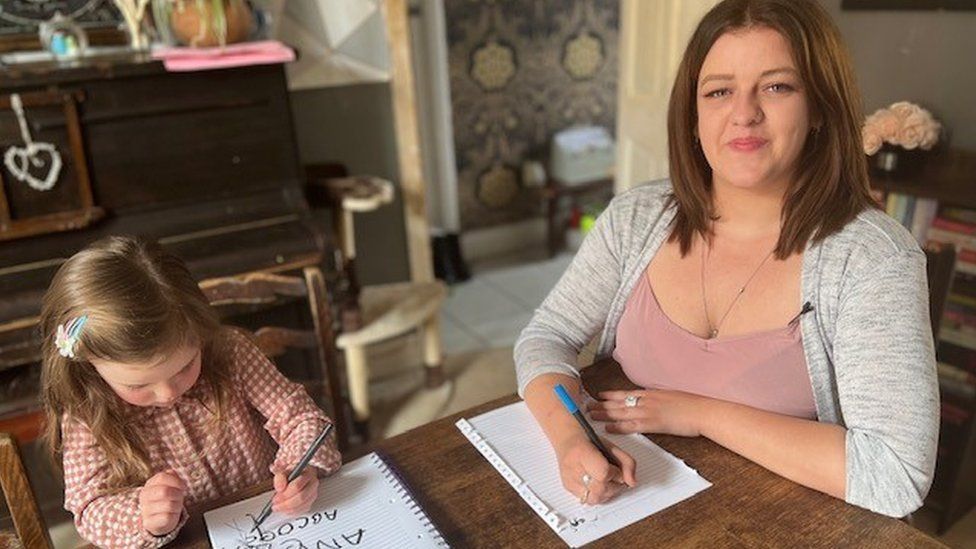 Zoe, a single mum who lives on The Wirral with her four year old daughter, and who receives universal credit will get £400 off her energy bills and also the £650 one-off payment.

She said she was "over the moon that the government is finally making us feel like we're being listening to".

"My big worry was going through the summer holidays with a young one and obviously not having the money to take them out too much," she told the BBC.

"With that payment coming through that has lifted a lot of stress and anxiety, because I was really panicked about this."

Debt charity Turn2Us called the support package "a much-needed step in the right direction in making sure people on the lowest incomes are able to weather this financial crisis".

But Michael Clarke, its head of information programmes, added: "For people who are in crisis currently, one-off payments will only act as a sticking plaster until longer term investment is made to boost their overall income."

Think tank the Resolution Foundation, which campaigns to end poverty, called the measures "progressive", adding that twice as much of the £15bn package would go to low-income households than high income ones.

Chief executive Torsten Bell said: "The decision to provide one-off payments this year to poorer households, pensioners and those with a disability is a good attempt to target those with higher energy bills - although the relative lack of support for larger families stands out."