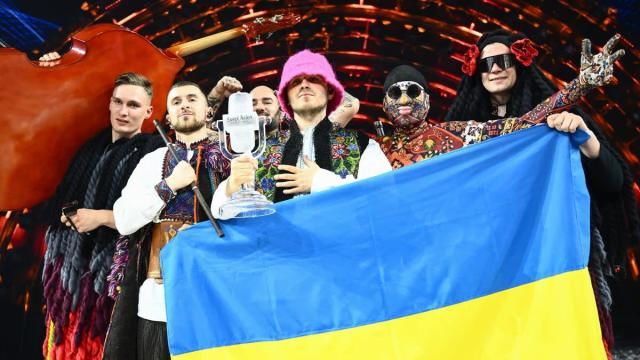 Ukraine should be given the chance to host the Eurovision Song Contest in 2023, the UK prime minister has said.

Speaking to journalists after returning from its capital, Kyiv, Boris Johnson said the streets there were lively and Ukrainians were "confident".

As winners of the contest in May, Ukraine should normally host the show, but organisers said on Friday they thought it would be too unsafe.

Its planners are discussing holding it in the UK instead, which came second.

Ukrainian rap-folk band Kalush Orchestra, who were given special permission to leave the country to compete, soared to first place with 631 points in a symbolic show of public support following Russia's invasion.

Despite winning the jury vote at the event in Turin, Sam Ryder came second for the UK - the country's best result since 1998.

"The Ukrainians won it fair and square, even though we had a brilliant entry, and they should be given the chance to host it," Mr Johnson said at RAF Brize Norton after returning from his trip to Ukraine on Saturday.

"It's a year away. It's going to be fine by the time the Eurovision Song Contest comes around and I hope they get it."

He was speaking after travelling back from an unannounced visit to Kyiv where he met President Volodymyr Zelensky.

The city felt lively and confident, Mr Johnson said, and people were out on the streets in a way that they were not when he last visited just a few weeks ago.

The European Broadcasting Union (EBU) that organises Eurovision said it on Friday that, following a "full assessment and feasibility study", they had come to the conclusion that it would not be possible to hold the 2023 contest in Ukraine.

"As a result of this decision, in accordance with the rules and to ensure the continuity of the event, the EBU will now begin discussions with the BBC, as this year's runner-up, to potentially host the 2023 Eurovision Song Contest in the United Kingdom," the EBU statement read.

Ukraine has already said it is not happy with the decision and says it believes it will be able to guarantee security for the competition, despite the threat of the ongoing Russian invasion.

Ukrainian Culture Minister Oleksandr Tkachenko said "we will be demanding to change the decision".

"Hosting Eurovision 2023 in Ukraine is a powerful signal to all the world, which is supporting Ukraine now," he said.

*  It has taken over hosting duties for other countries four times

*  The UK last hosted in 1998, from Birmingham, after Katrina and the Waves' win

*  Harrogate, Brighton, Edinburgh and London have also been host cities

*  Israel was the last country that declined to host, in 1980, having also won the year before

If the UK were to be confirmed as the host country, cities would have to prove they have the right facilities and go through a bidding process.

Several locations including Glasgow, Manchester, Leeds, and London have already expressed an interest in hosting the contest.