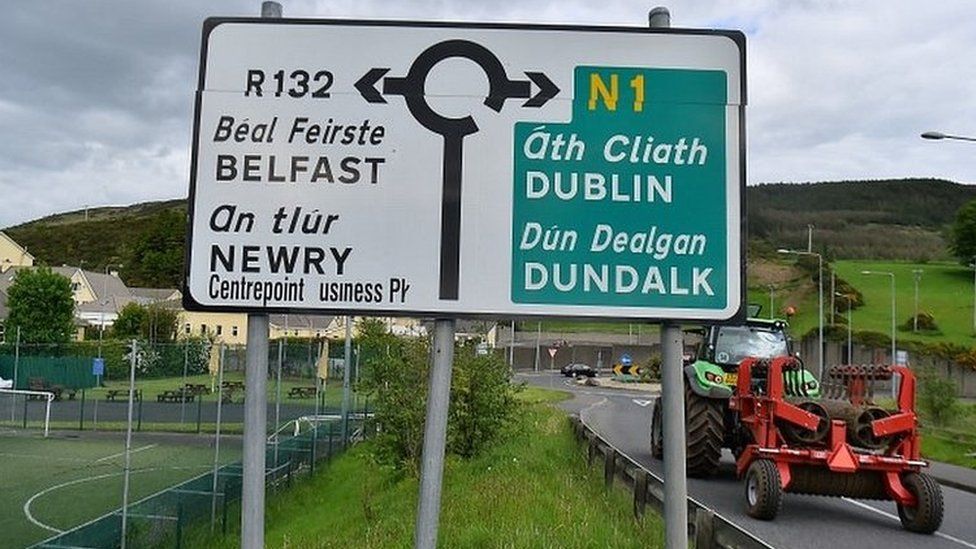 The EU is expected to launch legal action against the UK government on Wednesday over its decision to scrap some post-Brexit trade arrangements.

Ministers insist current checks on some goods travelling from Great Britain to Northern Ireland must end to avoid harm to the peace process.

They published a parliamentary bill on Monday aimed at overriding parts of the deal signed with the EU in 2020.

But Brussels says going back on the arrangement breaks international law.

This prevents a hard border with the Republic of Ireland - including checks there on the movement of people and goods - which both the UK and EU want to avoid in order to ensure peace is maintained.

But instead it means checks on some goods arriving into Northern Ireland from other parts of the UK.
That is opposed by unionists in Northern Ireland who argue it creates a trade border in the Irish Sea and could lead to the break-up of the UK.

Following elections in Northern Ireland last month, the Democratic Unionist Party is refusing to serve in a power-sharing executive with Sinn Fein until the protocol is changed.

But other parties in Northern Ireland - including Sinn Fein, the Alliance Party and the SDLP - accept the deal as it stands.

The UK government says it would prefer to agree changes with the EU, rather than act alone in making changes to the protocol.

"Otherwise the negotiations won't succeed. We've reached a dead end, because we can't change those core issues around customs and around VAT that are losing us the consent of the unionist community in Northern Ireland."

At the centre of the UK government's plan are measures they say would ease the impact on businesses - set out in the Northern Ireland Protocol Bill - including the concept of "green lanes" and "red lanes" for trade.

*  Goods coming from Great Britain (England, Scotland and Wales) into Northern Ireland and which are staying there using the green lane - meaning no checks and minimal paperwork

*  Goods moving from Great Britain through Northern into Ireland or the wider European Union would using the red lane - that is, continuing to be checked at ports in Northern Ireland.

The UK also wants the Luxembourg-based European Court of Justice (ECJ) to have no future role in deciding disputes involving the protocol, with an independent arbiter overseeing sitting in judgement instead.

In response, the EU has indicated it will restart legal action it began in March last year, when it accused the UK of delaying, without consultation, the enforcement of parts of the protocol relating to customs checks.

It could go further by taking the UK to the ECJ over claims it did too little to set up border control posts and share data with the EU.

The European Commission is expected to sign off the next legal steps at its meeting on Wednesday, while many senior EU figures have spoken out against the UK's plan to rewrite parts of the protocol.

Irish Foreign Minister Simon Coveney told Today: "This is not consistent with international law and the British government's obligations under international law, and that will be shown in time."

He added that "effectively what they will be doing is collapsing the protocol" and removing protections against "the severe disruption of Brexit on the island of Ireland".

"Britain has taken a very regrettable decision that goes against all the agreements between the EU and Britain," German Chancellor Olaf Scholz said.

"It is also unjustified because the European Commission made many pragmatic proposals."

Meanwhile, US Secretary of State Antony Blinken urged Boris Johnson's government to "continue negotiations with the EU in good faith".

Businesses which import Great Britain goods to Northern Ireland have experienced difficulties with the protocol as the checks and controls add cost and complexity.

Food and horticulture importers have faced the greatest problems, as those goods face the most onerous controls.

However, exporters have benefited because unlike other parts of the UK they have maintained frictionless access to EU markets.