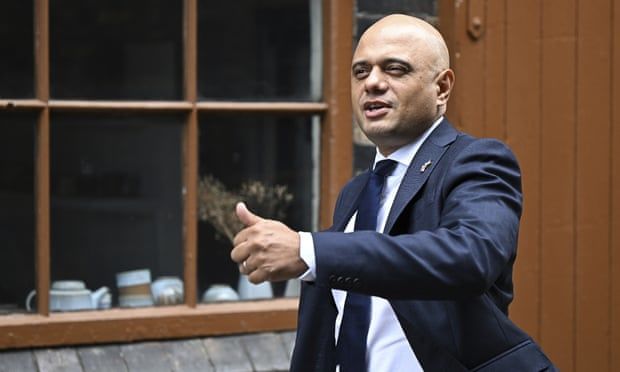 England going smoke-free by 2030 depends on No 10 willpower

Analysis: The question is not what is in the Khan review but whether its recommendations will be implement

While much has been made recently of the danger posed by soaring obesity levels, tobacco remains the biggest public health threat the world has ever faced.

Despite its risks being known for decades, 1.3 billion people globally still use tobacco products. They kill 8 million people every year, and more than one million of whom die from exposure to second-hand smoke.

In an effort to finally stamp out its use, and eradicate its associated harms, many western countries have announced bold tobacco policies with the aim of going smoke-free before the end of this decade. Some are going further and faster than others.

New Zealand is one of those leading the race after it announced it will outlaw smoking for the next generation, so that those who aged 14 and under today will never be legally able to buy tobacco. 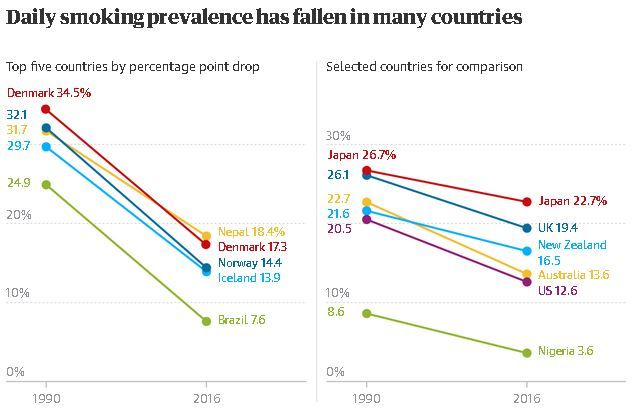 The legislation means the legal smoking age will increase every year, to create a smoke-free generation of New Zealanders. Other measures aimed at reaching its goal of making the country smoke-free by 2025 include: reducing the legal amount of nicotine in tobacco products to very low levels; reducing the number of shops where cigarettes can legally be sold; and increasing funding to addiction services.

In England, health officials are considering radical ways to reduce the number of smokers from the estimated total of 6 million. On Thursday, an independent review commissioned by the health secretary, Sajid Javid, and led by Javed Khan, a former chief executive of the children’s charity Barnardo’s, will be published.

The Guardian understands the recommendations could include raising the legal age of smoking to 21 and introducing further taxes on tobacco companies. The review is also likely to recommend the NHS increase efforts to encourage smokers, particularly among pregnant women, to switch to vaping and e-cigarettes. 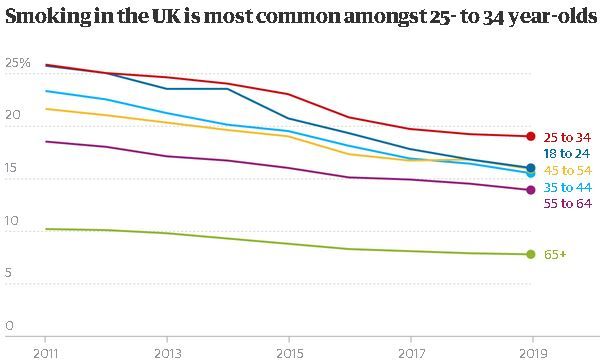 The minimum age for tobacco purchases was last raised from 16 to 18 in England, Scotland and Wales in 2007. Smoking in enclosed public spaces and workplaces was made illegal in England, Wales and Northern Ireland in the same year. Scotland brought in legislation in 2006.

The Khan review into smoking was commissioned to provide independent, evidence-based advice to the government to help reduce inequalities linked to smoking. Khan was also tasked with identifying the “most impactful interventions” to cut uptake of smoking and support people quitting. The government announced in 2019 its ambition to go smoke-free in England by 2030.

Some sources have suggested the review, which was commissioned in February, is “political cover” for Javid to prevent the risk of Downing Street ditching the 2030 target, amid fears the Conservatives may be accused of trying to implement a “nanny state”.

David Canzini, the influential deputy chief of staff in No 10, has advised Boris Johnson to scrap as many policies as possible that may be unpopular with Tory MPs or traditional Conservative voters. The Conservatives will also be keen not to lose the ground made with red wall voters, something they may fear would be at risk if tight tobacco policies are suddenly thrust on them.

Javid, who quit smoking after becoming health secretary last year, is understood to be in favour of significant changes to the government’s tobacco policy. He is said to have examined policies in the US, where the legal age is 21, as well as countries such as New Zealand, and considered tightening rules on sales.

But there is scepticism among other members of the cabinet and Johnson about raising the legal age, or introducing new taxes.

Cancer Research has previously warned that England is expected to miss its target of being smoke-free by 2030 because so many poorer people are still using cigarettes. Whether or not England can hit the target will depend not on the size or shape of the policies recommended on Thursday, but on whether the government is prepared to implement them.