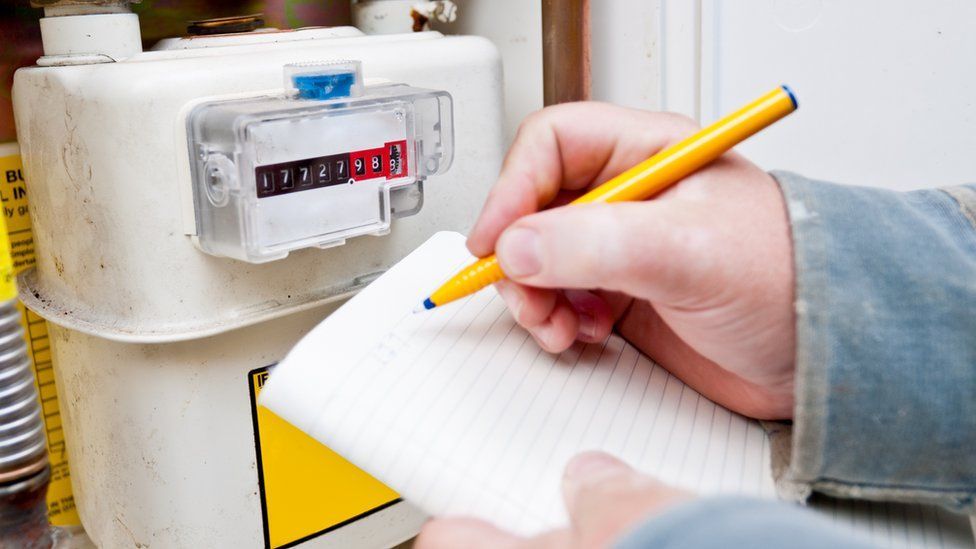 Energy websites have been crashing as customers rush to submit meter readings ahead of bills rising on Friday.

A number of major suppliers said they were working to resolve issues with their websites.

Experts have encouraged people to submit readings so their usage is covered by the current cheaper rates.

On Friday, the energy price cap - the maximum price suppliers in England, Wales and Scotland can charge households - is being raised.

It means the energy bill of a typical household will increase by 54%.

Recording a meter reading prevents suppliers estimating usage and potentially charging for energy used before 1 April at the higher rate.

Greg Jackson, chief executive of Octopus Energy, said the company was currently receiving around 40,000 meter readings an hour, whereas a normal day would be a couple of thousand.

However, he urged people not to panic about submitting a reading before 1 April.

"I think with most companies, certainly with Octopus, you can give it any time in the next week and... we'll apply it to the day when you took it," he told the BBC's World at One programme.

Mr Jackson added that he was "pretty sure that'll apply universally".

What should I do if I'm struggling to submit a meter reading?


*  Many suppliers also offer alternative ways of submitting readings, such as automated phone lines and apps

One British Gas customer, Izmir Smajlaj from Streatham, said he had tried for almost two hours to submit a meter reading online.

"Every time it pops up as an error. The system is probably overloaded with people trying to do the same," he told the BBC.

"I tried a laptop, phone, my partner's phone. Tried to reach the British Gas helpline for half an hour then gave up [because] I'm at work."

Graham Ruddock, a retired civil engineer from Bracknell in Berkshire, said he had been trying to log into his account with E.On Next all morning to enter his meter readings.

He told the BBC he had been unable to access his account, instead getting a message advising him to try again later because of "higher than usual levels of traffic".

Graham said his gas and electricity bill was rising from £80 a month to £200 a month from April, adding that energy price rises would be "the biggest single change in my finances".

In response to one customer who complained they were unable to submit a meter reading online, E.On Next, in a now deleted tweet, blamed consumer expert Martin Lewis for creating "unprecedented demand bringing down Britain". Mr Lewis had urged his social media followers to submit meter readings ahead of 1 April when prices will rise.

E.On later apologised for the tweet, saying it was "an ill-considered and off-the-cuff remark made by one of our energy specialists and in no way reflects our position".

"We can confirm to our customers that any meter readings they take today can be updated to their account online in the coming days," a spokeswoman said. 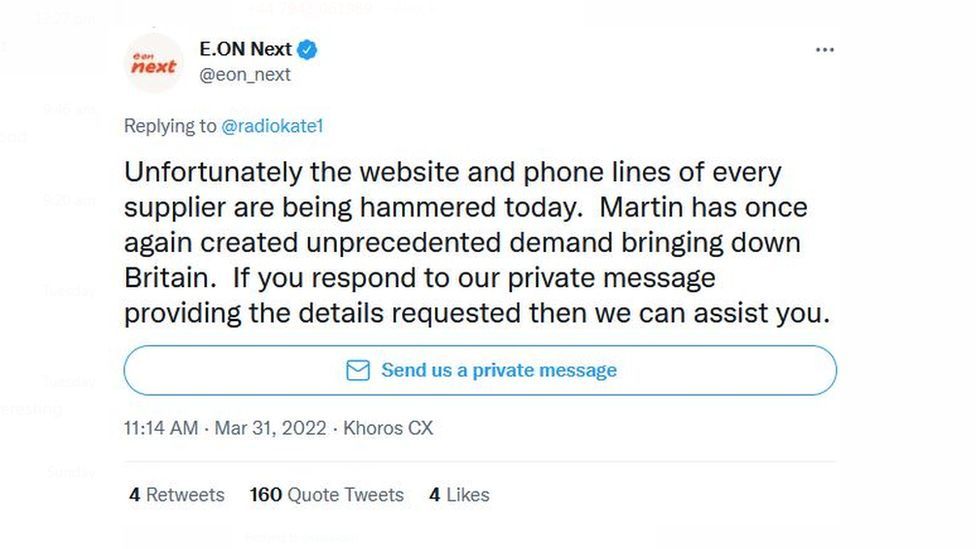 Citizens Advice said firms should have been better prepared for a surge of customers submitting readings.

The charity's head of energy policy, Gillian Cooper, said the situation was "frustrating" for customers worried about how they will cope with rising bills.

However, energy companies said they were seeing unprecedented traffic to their websites.

A message on the British Gas website said it was facing "some technical issues we're trying to resolve as quickly as possible".

It said customers could still submit readings, but warned it could take "a little time to update your account with the meter reading you provided today".

A Scottish Power spokesman said: "We are aware of an issue some of our customers are facing trying to log their meter readings on our website and are working to have the issue resolved as quickly as possible."

He added that customers could still log meter readings on the company's app, which was still working.

A spokesman for EDF said it was aware of technical issues affecting its website and app when customers tried to submit meter readings.

"We are working hard to try and resolve this and would encourage customers to try again later and apologise for the inconvenience this is causing," he said.

A spokesman for Shell Energy said: "Our website is experiencing disruption as we deal with a surge in the number of customers trying to access their account."