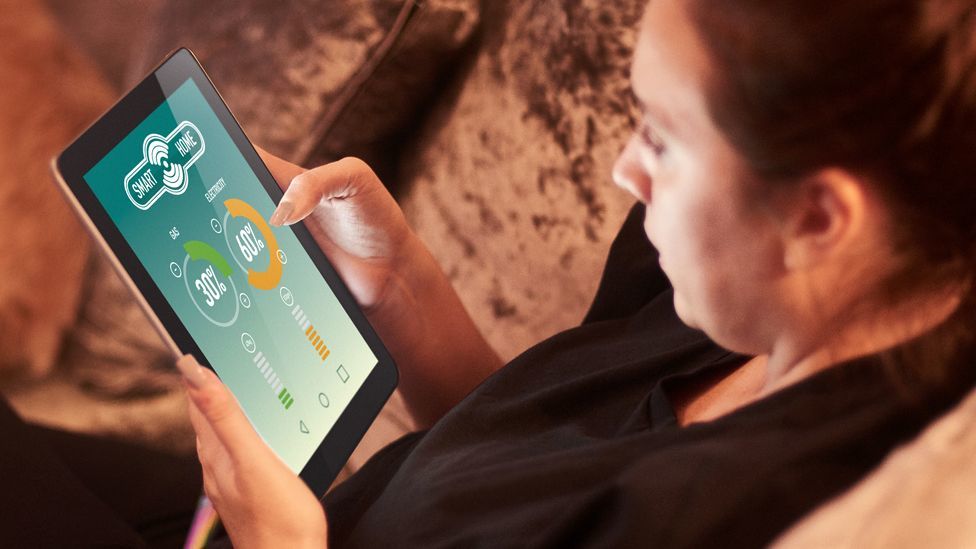 Millions of people will now feel the impact of an unprecedented £700-a-year rise in energy costs - at the same time as a host of bill hikes take effect.

The 54% rise in the energy price cap means a household using a typical amount of gas and electricity will now pay £1,971 per year.

A further rise pushing the annual bill up to £2,600 should be expected in October, one analyst has told the BBC.

Council tax, water bills and car tax are also going up for some on 1 April.

Minimum wage rates are rising which, along with some financial support from the government, is partially softening the blow.

The £693 a year rise in a typical energy bill will affect 18 million households, with 4.5 million customers on prepayment meters facing an even bigger increase of £708 a year.

Among them is Winston Carrington, a grandfather in his 70s, who said he was growing vegetables in the garden of his Manchester home to help ease the impact of the rising cost of living. 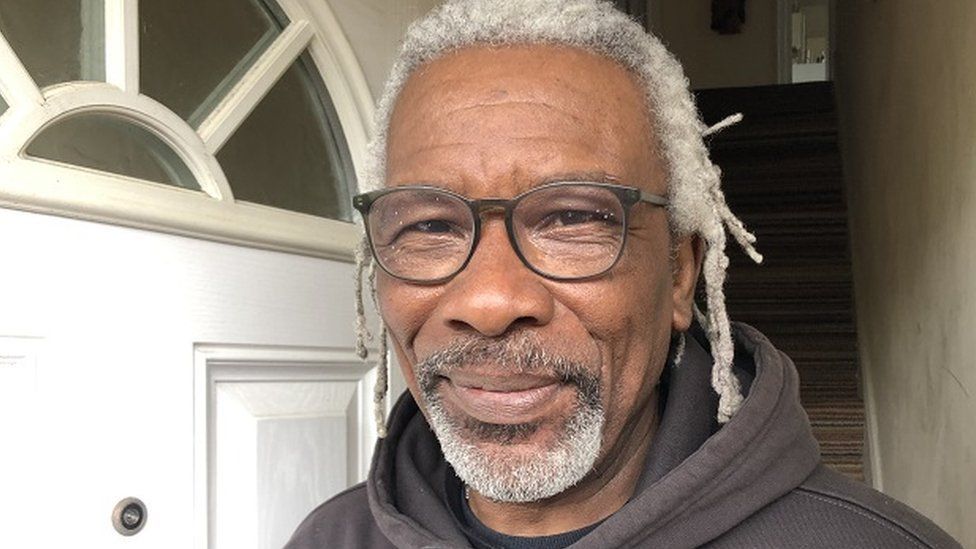 Winston Carrington is worried about covering his bills

"I'm going to grow, and I'm going to fill my freezer this year with my own produce. I'm going to have to," said Mr Carrington, who uses a prepayment meter.

"I can't go away this year again, not because of Covid or anything. I just can't afford to go away. The state pension that we're getting at the moment does not cover what I need."

Prices in general are rising at their fastest rate for 30 years, but the sudden increase in the cost of energy is the most significant for individuals.

New official figures suggest four in 10 bill-payers have been finding it very, or somewhat, difficult to afford their energy costs.

The governor of the Bank of England, Andrew Bailey, said the country is facing the biggest single shock from energy prices since the 1970s. It is the largest increase, by far, in the energy regulator Ofgem's price cap, since it was introduced.

The cap, set every six months for England. Wales and Scotland, is designed to protect domestic customers from the volatility of wholesale energy prices. 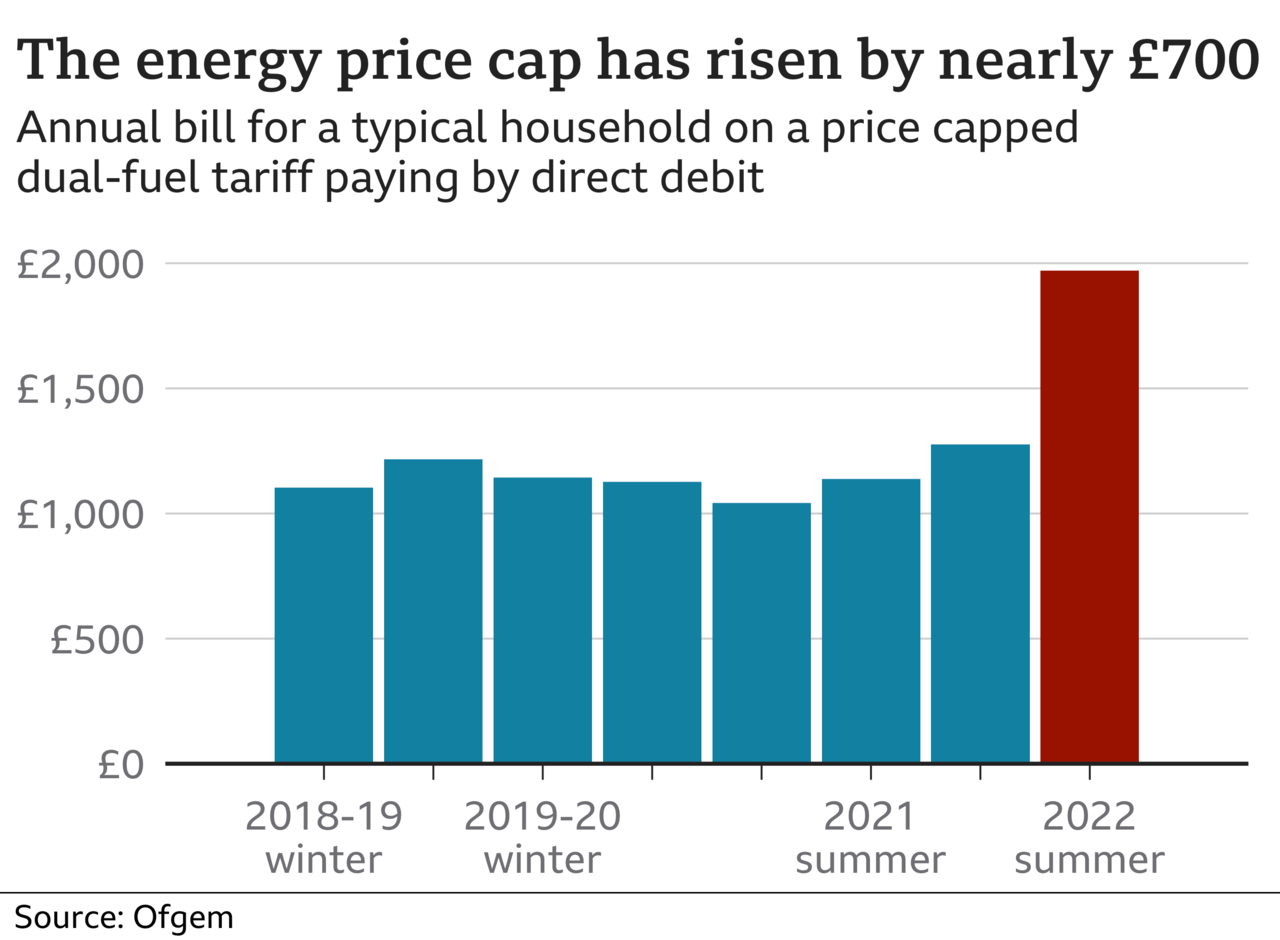 However, official forecasters and analysts have warned people to be braced for another huge rise in energy bills when the next cap takes effect in October. Wholesale prices have been affected by the war in Ukraine and ongoing pressure on suppliers.

This could add another £629 to a typical bill in October, according to the most up-to-date prediction, provided to the BBC from leading energy consultancy firm Cornwall Insight.

If this proved to be accurate, then the average bill next winter would be double that of the winter just gone. A typical bill is expected to fall back to the current level in summer 2023, although longer-term forecasts are tricky.

Bill Bullen, the boss of Utilita, warned that elderly people and children were at serious risk over the next winter because of a lack of heating.

"We are going to see an extra £500 or £600 added to bills in October, and frankly the chancellor's going to have to fund that entirely for low-income households," he told the BBC's Today programme.

"He won't be able to afford to take this problem away for everybody... but for customers who can't respond to that price [increase], that's where the help needs to be targeted."

Chris O'Shea, chief executive of Centrica, which owns the UK's largest supplier British Gas, said his business was supporting struggling customers and was giving grants to those most in need.

"We would love to do more. The reality is that for a retail energy company, the market has gone through quite a change, and profits have reduced quite substantially," he told the BBC's Big Green Money Show.

However, he accepted that profits had risen sharply for the heavily taxed exploration arm of the business.

Council taxes and water bills are also going up for many people, added to the rising cost of food and household items.

One estimate suggests that a typical consumer is now facing a £73 a month increase in bills, of which about £58 is from rising energy costs.

"The added cost pressures set to come into play in April threatens to obliterate even the most finely tuned budgets." said Myron Jobson, senior personal finance analyst at Interactive Investor.

The Office for National Statistics said that low earners, renters, parents, people with disabilities, unemployed people and divorcees were least able to afford a bill shock.

Even before the latest increases, charity Citizens Advice said that in March, it referred 24,752 people to food banks or to other charitable support, up by 44% compared to the same month last year.

The government has said it was taking "decisive action" to help people with the cost of living, including a £200 reduction to energy bills in October - which needs to be paid back in instalments, and a £150 reduction in council tax bills for 80% of billpayers.

Speaking to BBC Breakfast, Sir Keir Starmer, the leader of the Labour party, branded the government's response as "pathetic".

He accused the government of forcing people to choose between heating their homes or eating.

He said that the Labour party would introduce a one-off windfall tax on the profits of oil and gas companies and use the money to help households struggling to cope with rising energy bills.

But Chancellor Rishi Sunak told the BBC's Newscast: "I'm confident in what we've done. I know it's tough for people. We're facing a very difficult situation with the price of things going up and I want to do what we can to ameliorate some of that, but I'm also honest with people that we can't ameliorate all of it, sadly."