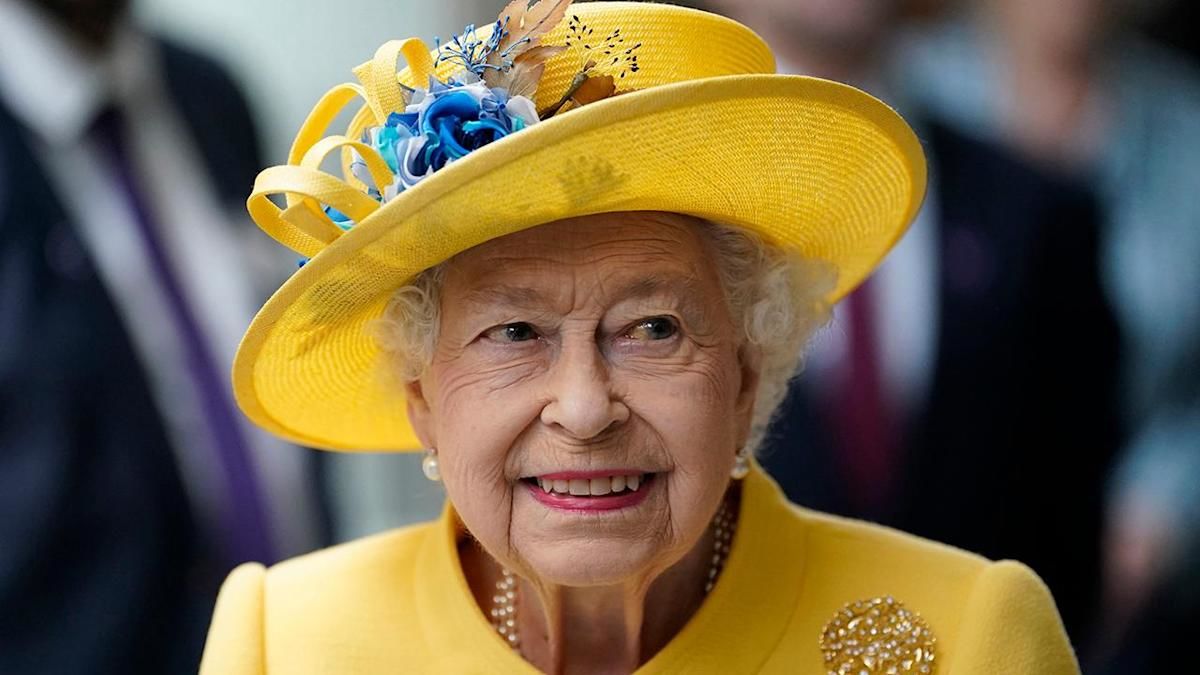 The Queen has made a surprise visit to Paddington Station to see the completed Elizabeth line.

Transport for London (TfL) has announced the delayed Crossrail project will open to the public on 24 May.

Ahead of the opening, the 96-year-old joined her youngest son the Earl of Wessex for the official visit.

The longest reigning head of state is just over two weeks away from her Platinum Jubilee celebratory weekend to celebrate 70 years as monarch.

A Buckingham Palace spokeswoman said: "In a happy development, Her Majesty The Queen is attending today's event to mark the completion of the Elizabeth line.

"Her Majesty was aware of the engagement and the organisers were informed of the possibility she may attend." 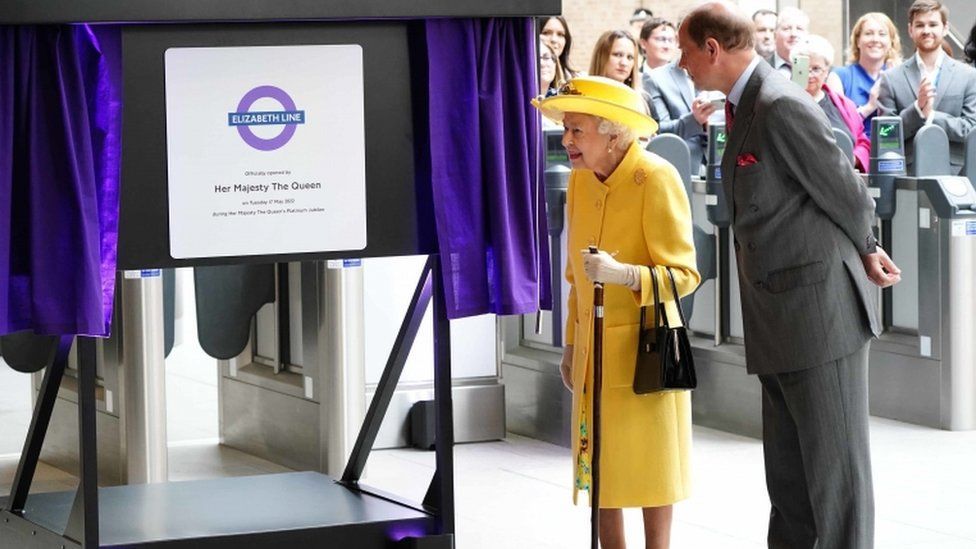 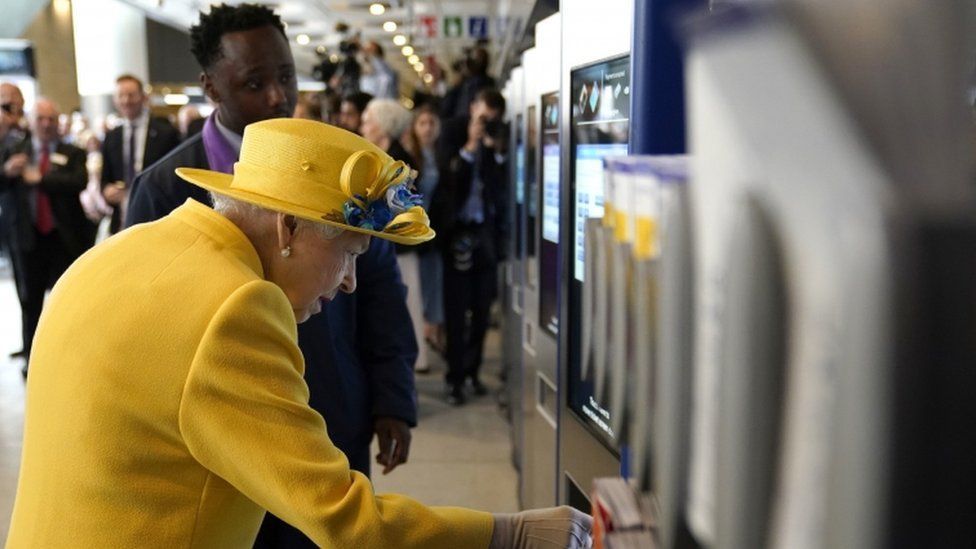 Buckingham Palace said the Queen's visit was a "happy development"

The Queen rallied to make a trip to the Windsor Horse Show on Friday and on Sunday was the guest of honour at the equestrian extravaganza A Gallop Through History near Windsor, the first major event of the Jubilee festivities.

But Tuesday's engagement is the Queen's first one outside of the Windsor area since she attended the Duke of Edinburgh's memorial service in Westminster Abbey seven weeks ago.

Dressed in sunshine yellow, she arrived just after 11:30 BST stepping carefully from a transparent lift while holding a walking stick. 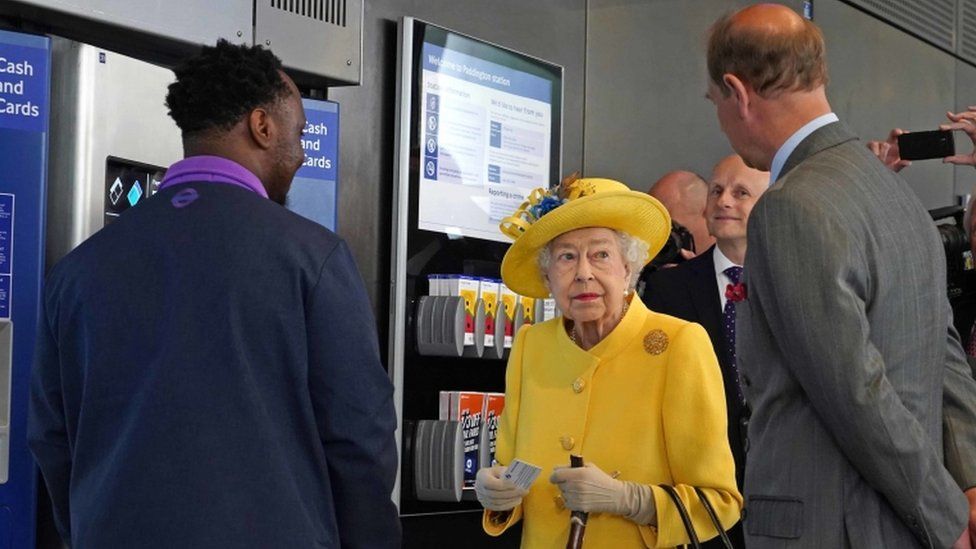 The Queen spoke to staff and was given an Oyster card 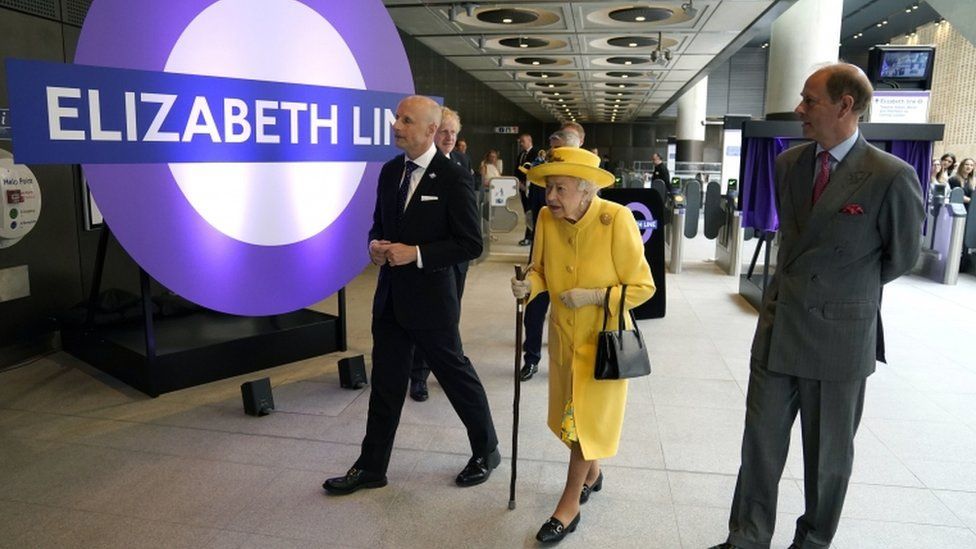 They met staff who have been key to the project, formerly known as Crossrail, and those who will run the railway, including train drivers, station staff and apprentices.

The Queen was also given an Oyster card and shown how to use it on a ticket machine.

Unveiling a plaque stating she had "officially opened" the Elizabeth line, named in her honour, the monarch spent 10 minutes in the station before departing, escorted by Prince Edward. 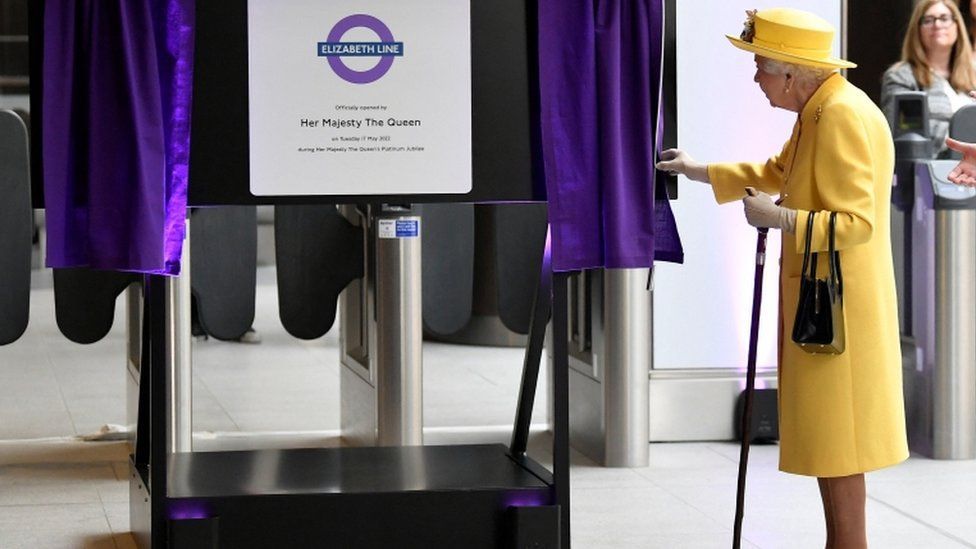 Afterwards, Mr Johnson said: "We're all incredibly touched and moved and grateful to Her Majesty for coming to open the Elizabeth line today.

"It was fantastic to see her."

The earl then returned to the concourse ahead of a return journey on the railway from Paddington to Tottenham Court Road. 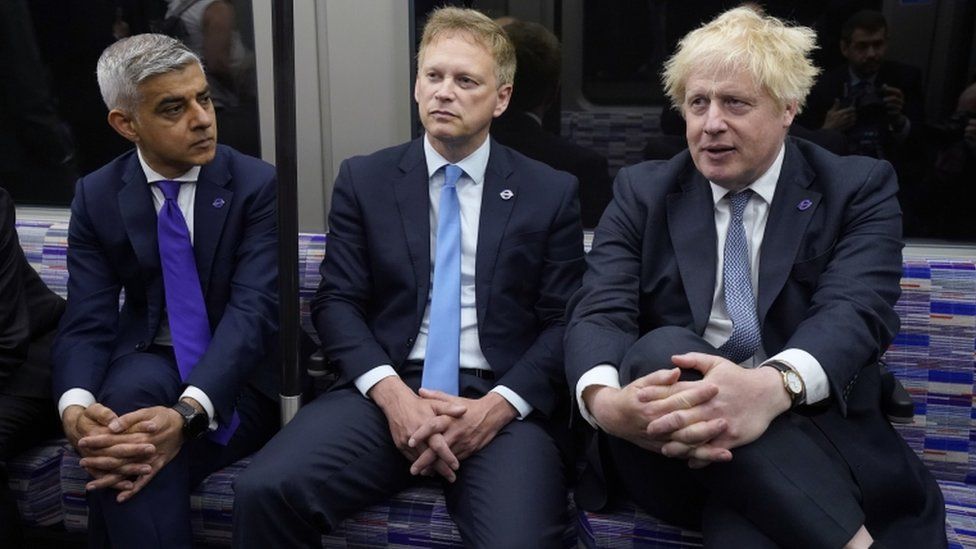 During the second leg, he was invited to stand in the driver's cab.

He chatted with driver Carinne Spinola as the train moved, telling her it was "brilliant".

After stepping off the train at Paddington, the earl added: "That was brilliant. I did enjoy that. It was good fun."

Even though it's not every day that you have a rail line named after you, there hadn't really been much expectation the Queen would attend today's Elizabeth line official opening.

It had only been a "possibility", with Prince Edward down for the ceremonial duties.

But Oyster card in hand, the Queen was there too, looking well and defying worries about her health.

Dressed in a Circle line yellow, she unveiled the plaque, in what seems to be a return to attending more of such public events, after a long gap during the autumn and winter.

If the new line will help the public get around, the Queen, stick in hand, seems to be tackling her own mobility problems.

It will also be seen as a positive sign about her ability to take part in the busy schedule of events next month for the Platinum Jubilee. 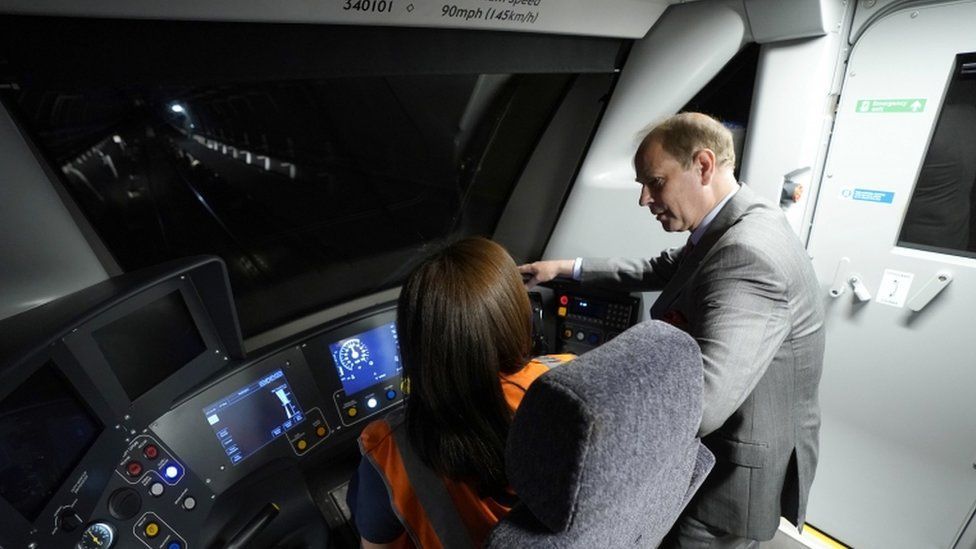 The total cost has been estimated at £18.9bn, including £5.1bn from the government.

TfL says the Elizabeth line will boost capacity and cut journey times for travel across the capital.

It stretches from Reading, in Berkshire, and Heathrow Airport, in west London, to Shenfield, in Essex, and Abbey Wood, in south-east London.

Once the route is open, services in the central London section will run every five minutes between 06:30 and 23:00, although a full timetable will not be in place until May 2023.

The new line is expected to slash journey times from Abbey Wood to Paddington by almost half, to 29 minutes.

Travel times between Liverpool Street and Woolwich are also set to be halved to 15 minutes.

A trip between Farringdon and Canary Wharf, which currently takes 24 minutes, will take 10. 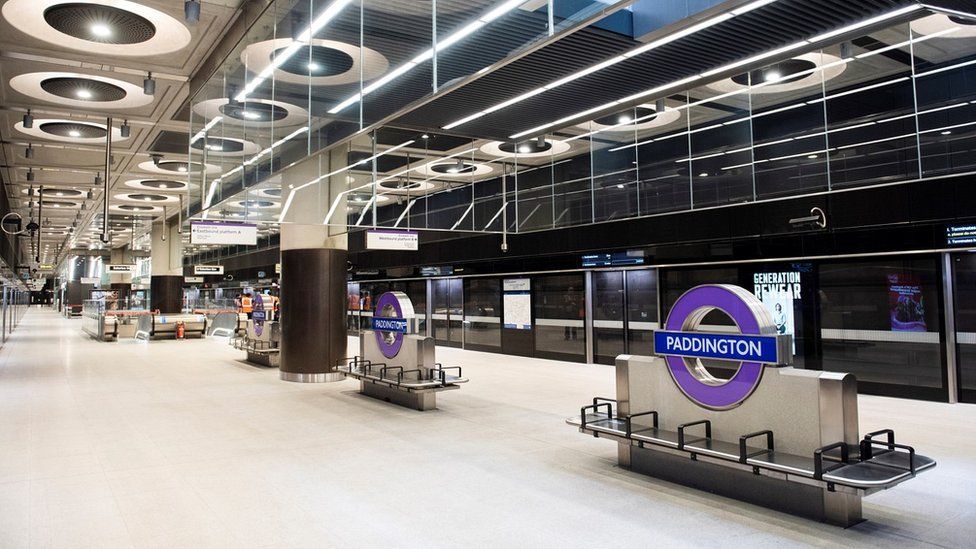 However, passengers wishing to travel the length of the line will still need to change at Paddington or Liverpool Street stations, depending on their destination, until next year.

Although a special service will be in place for the Platinum Jubilee weekend from 2-5 June, TfL said trains would not initially run on Sundays "to allow a series of testing and software updates".

Trains will initially operate in three sections, which are expected to be integrated in the autumn. 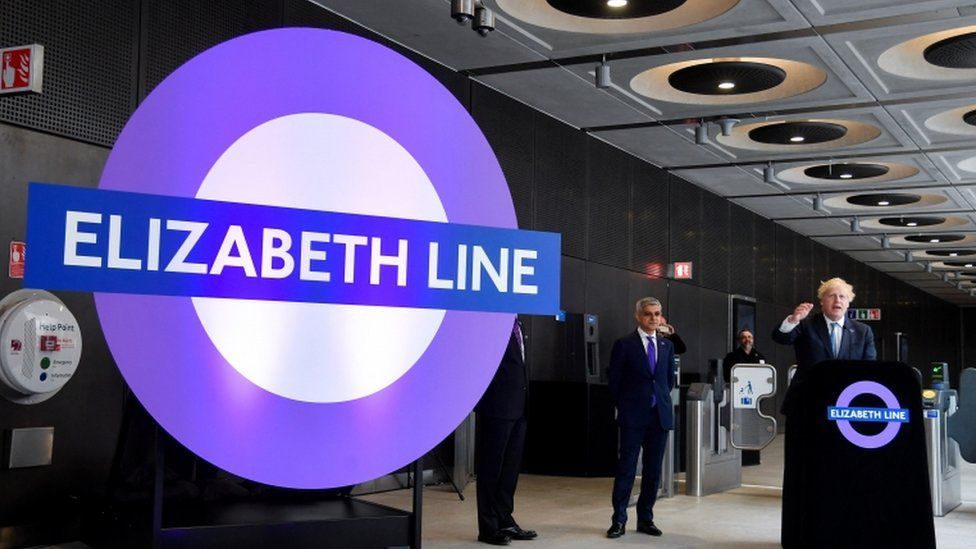 London mayor Mr Khan said the line was the "most significant addition to our transport network in decades".

"There is now just one week to go until our world-class new railway will be open to passengers and I can't wait for everyone to experience it."

The prime minister added the government would back a Crossrail 2, a proposed north-south rail link across London, but the capital's businesses would need to develop a plan to pay for it.

Crossrail 2 is proposed to run between Hertfordshire and Surrey, via tunnels under central London and it is estimated it would cost £33bn.