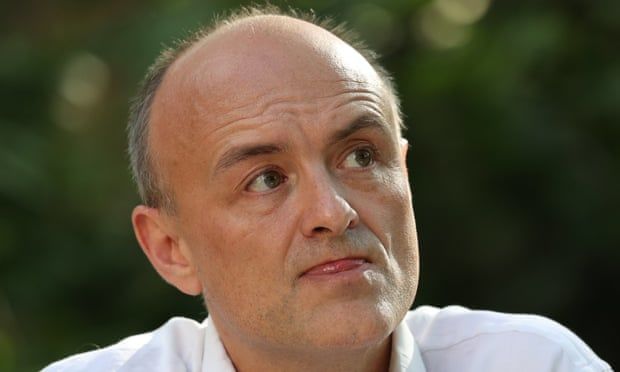 Dominic Cummings: key claims in his latest attack on government

Dominic Cummings has delivered yet more incendiary claims – backed up with some new evidence – in an attempt to tackle what he says is an “Orwellian” rewriting of history by the government about mistakes made during the Covid pandemic.

In a more than 7,000-word essay published on the online platform Substack, he made a series of allegations under the broad headline: “The PM on Hancock: ‘totally fucking hopeless’”.

Cummings published three key Cobra documents from meetings in early March which he said showed the government intended to pursue a herd immunity strategy by September.

The first document said the government “seeks to avoid” a high second peak of the virus in the autumn when the NHS would be overstretched and that that would be exacerbated by “very stringent social and behavioural interventions like China” because the virus would surge after lockdown ended.

The second document showed the interventions the government were considering and its effect on intensive care unit capacity. It reveals the most stringent intervention that was modelled was case isolation and social distancing for over-70s. It did not show any modelling for a full “stay at home” lockdown.

A final document suggested there would be 250,000 dead after the “optimal single peak strategy”, with herd immunity by September.

Cummings also published “whiteboard” plans shown to the PM urging a shift to a lockdown strategy on 14 March, as well as mass testing and increasing NHS capacity. Cummings insisted this was the first time a lockdown scenario had been modelled.

He said both Hancock and the Scottish first minister, Nicola Sturgeon, had wanted to delay the introduction of quarantining those with symptoms because a helpline was not ready and were overruled. “Both of them have misled the public about this,” he said.

Hancock told MPs that a plan for suppression had been published on 3 March – the contain-delay-mitigate strategy, a document Cummings called “embarrassingly awful”.

Testing: ‘Hancock “hopeless”, but PM does nothing’

In his blogpost, Cummings said Hancock’s select committee hearing had “muddied the waters” about the goal – suggesting he had opposed it – and disclosed text messages to prove he had pushed to ramp up testing. “I was pushing the system on testing weeks before Hancock’s announcement and to build a system for 1m per day,” he said.

What he had opposed, he said, was the “chaos” where Hancock “blurted out his 100k target to the media” and said the health secretary had taken the opportunity while both Cummings and Johnson were ill with Covid.

In a text message to a WhatsApp group including the prime minister, Hancock, Chris Whitty, Patrick Vallance and the then director of communications, Lee Cain, Cummings raised the goal of 100,000 tests a day.

Cummings said Hancock had misled the meeting when the goal was agreed, including saying that the current hold-up was with the Treasury. On 26 March, Cummings texted the PM saying that Hancock was falling behind on his testing promises and it would mean tens of thousands of NHS staff could be absent.

However, Cummings said Johnson never confronted Hancock – “he would never say to him, despite dozens of requests from two cabinet secretaries, me and other ministers and officials”.

Cummings said the 100,000 goal had distracted from other crucial issues including care homes during April – “distorting priorities across the system so that he [Hancock] could hold a successful press conference”.

One of the biggest scandals of the first Covid wave was that hospital patients were being discharged into adult social care homes without being tested for Covid – seeding the virus into vulnerable and elderly people.

Cummings accused Hancock of “creating a new version of reality” by claiming the government “threw a protective ring” around care homes. He said the health secretary “neglected” care homes throughout April 2020 because he was “trying to focus effort on his press conference” at the end of the month, where he wanted to triumphantly declare his testing target had been met.

Having returned to work on 13 April following his Covid illness and trips to Durham and Barnard Castle, Cummings said that despite Hancock’s assurance that people would be tested before being moved from hospitals to care homes, that was not happening and “there was still no plan to do so”.

Two days later, Cummings said, No 10 was told that a lot of tests were not being used because Hancock’s department had “left in place rules that were limiting those eligible for tests, despite care homes screaming”.

Despite this, “the care homes nightmare continued”, said the former No 10 aide.

Then on 3 May, Cummings recalled he wrote to Johnson: “I think we are negligently killing the most vulnerable who we are supposed to be shielding and I am extremely worried about it.” A few days later, Cummings said, he and No 10 dug into Hancock’s denial of any problem – and ended up concluding the health secretary’s “failures and dishonesty made him unfit for his job” given “there was still no serious testing in care homes and this was killing people”.

Also vital to stopping the virus spreading in hospitals and care homes, and ensuring staff did not go off sick, was personal protective equipment (PPE).

“The lack of PPE killed NHS and care home staff in March-May,” was Cummings’s blunt assessment. He said Hancock had given a “fictitious” account of the procurement of items such as aprons, gloves and face shields.

He added this was another subject on which Hancock and No 10 were “creating a new version of reality”, saying that the government’s procurement operation had “collapsed” and stuck to old rules when it should have been operating on a “wartime mentality”.

The health secretary insisted PPE was “all under control” on 26 March – leading to wasted weeks where problems were not solved, Cummings said, adding Hancock sought to blame the chancellor, Cabinet Office and chief executive of NHS England, Simon Stevens.

Hancock “had to be removed from crucial decisions”, said Cummings, meaning procuring PPE was handed to Lord Deighton – a Tory peer who was judged to have led well the 2012 London Olympics organising committee.

Officials were flatly contradicting Hancock’s insistence that PPE was not running short, Cummings said, with civil servants telling him most deliveries of the items would only arrive after the first wave in April.

By 20 April, Cummings said, Hancock’s department had only just set up a 24/7 payments system for procurement with Asia. “Imagine if NHS staff wearing bin bags had realised that DHSC had not even set up a round-the-clock system at this point, imagine the rage in No 10 when we discovered this,” the ex-aide said.

“At this time NHS staff were screaming for PPE. The dashboard daily meetings showed we were running out of critical items such as gowns. Reports flooded in of hospitals having run out or on the brink of running out and begging for supplies. Hancock caused further chaos by repeated briefing to the media about how new loads were flying in, bluffing his way through meeting after meeting – his whole routine.”

Cummings also teased the release of further information, saying Hancock had given “a fictitious account of what happened on masks” but that he would “leave that to another day”.

Boris Johnson: wants to ‘make money and have fun’

Hancock may have been the main target of Dominic Cummings’s ire, but the spurned former adviser also levels a series of charges at the prime minister. He claimed Johnson’s administration could not be trusted, and would “unravel”, urging Johnson’s opponents to start preparing now for “what comes next”.

Cummings was particularly preoccupied with what he claimed were No 10’s efforts to rewrite the history of the early days of the pandemic, by claiming “herd immunity” was never the government’s plan A.

He lays the blame for what he saw as these lies firmly on Johnson’s shoulders, accusing him of “trying to influence officials/advisers to support the rewriting of history” and “encouraging ministers to give false accounts to parliament”.

Cummings also claimed that what he saw as Johnson’s protection of Hancock sent a damaging signal: that “a secretary of state will be rewarded despite repeated incompetence and dishonesty and the government machine will seek to rewrite history in Orwellian fashion because the PM thinks it in his personal interests to do so”.

Of course, many at Westminster felt Johnson’s protection of Cummings over his lockdown-busting trip to Durham a year ago sent a pretty strong signal, too.

Cummings also said the prime minister had a “clear plan”, not to “go on and on” but to step down two years after the next general election, to “make money and have fun”.

Finally, Cummings gave an excruciating account of the way Johnson chairs meetings – claiming he told rambling stories and jokes and avoided any difficult issues, urging colleagues to “take it offline”, before shouting “forward to victory”, doing a thumbs-up and fleeing the room before anybody could disagree.

Despite Cummings’s lengthy and occasionally rambling analysis, the health committee chair, Jeremy Hunt, pointed out in a Twitter thread that he has yet to produce any evidence that definitively shows Hancock lied to the prime minister.