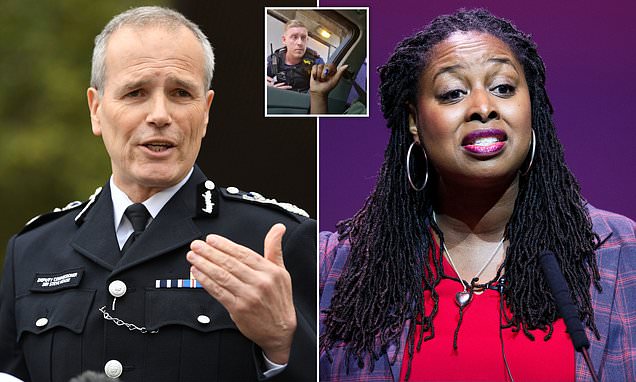 The deputy commissioner of the Met Police says the officers who stopped MP Dawn Butler in a car did not know she was black because the windows were tinted.

Sir Steve House today threw his support behind the police officers after the Labour MP accused them of racial profiling when the BMW in which she was travelling in with her black friend was pulled over in Hackney, east London on Sunday.

Sir Steve defended the constables' conduct after reviewing the incident, footage of which - filmed by Ms Butler - has spread widely on social media.

He said the officers had acted properly, and it was 'unfair' that police should have their actions hastily posted and scrutinised on social media, rather than being reviewed through proper channels.

He added officers, ‘didn't know who the occupants of the car were, including their ethnicity because the car windows were tinted.'

The MP for Brent Central said the situation had left her 'irritated and angry', she has branded the Metropolitan Police 'institutionally racist'.

Ms Butler has not reacted to the Met boss' comments but has been retweeting criticism of the organisation.

'The officers in this case came into work on Sunday to keep Londoners safe,' he said in a statement.

'Officers expect to be scrutinised and there are existing, appropriate and proportionate processes for making complaints and for facts to be established, and on the occasions where there is fault – unlike this case – for consequences to follow.

'The increasingly routine trial by social media is unfair and damaging to individual officers and has the potential to undermine the role our communities need us to do to protect them and keep them safe from violence.'

Sir Steve said he had discussed with Ms Butler her concerns over why the stop was made, adding she had no complaint about how it was conducted.

He said the officers were from the Violent Crime Task Force and were in the area 'as part of our proactive work to protect communities from violence'.

'Criminals often use vehicles to travel in and to commit crime, therefore officers will often check cars to see if there is anything that requires them to stop it and do further checks,' Sir Steve said.

'The officers ran a number plate check on the vehicle.

'At this stage, the officers still didn't know who the occupants of the car were, including their ethnicity because the car windows were tinted.'

A mistake was made, however, when an officer incorrectly entered the car's registration into his computer, Sir Steve said, adding that was when the Police National Computer returned details of a car from another region of the UK.

As a result, he said, the officers had decided to conduct further checks by stopping the vehicle and engaging with its occupants.

'I expect officers to have professional curiosity and I would have done the same,' he said.

Having viewed video footage Sir Steve said the officers 'acted professionally and politely, explaining why the stop was made and, when realising there was a mistake, explaining this and continuing to answer the occupants' questions'.

Sir Steve also condemned the abuse some people had directed towards Ms Butler on social media since Sunday.

'It is unwarranted and unacceptable and we are working to support her,' he said.

Mr Marsh said: 'We are fed up with individuals being allowed to film my colleagues with impunity and put it out on every social media strand within five seconds, wherever they want, but we're not allowed under legal grounds… to do the same, to put my colleagues' body-worn camera out immediately.

'Now, that sounds a bit perverse, don't you think, because we've got nothing to hide.

The federation represents thousands of rank and file officers in the London area.

Ms Butler herself confirmed officers had told her and the driver they had put their registration number into the system and it had come back registered in north Yorkshire.

She said: 'The police came back and said oh yes the car is registered to you in your name, then the other guy, the younger police officer was asking me if I lived in London, what I was doing in the area, if I was going out where was I going, and I found that quite invasive and I was saying 'It's none of your business where I am going why is that relevant to stopping and searching'.

'I still don't why the police punched the number plate into their system, I don't know what raised their suspicion all I can tell you factually is I'm black, my friend is black and he's got a fairly decent car.'

Ms Butler filmed her heated confrontation in Hackney with two officers, who she claims demanded to know what was in the back of car.

She told the BBC: 'I said to my friend what's happening and he said they're stopping us and I thought 'wow okay' and I thought I better start recording, this will make interesting research because just a few days earlier I was saying to Cressida Dick that stop and search doesn't work and racially profiling people doesn't work

After being left 'irritated and angry', she yesterday branded the Metropolitan Police 'institutionally racist'.

She said: 'We were two black people in a car, driving through Hackney, and they thought they'll stop us.

She added she had agreed to meet with local police bosses to discuss 'taking the bias out of the system.'

'It's about time we changed the system so it works for everyone and it's effective,' she told BBC Breakfast.

Ms Butler – who in 2015 became the third black woman to be elected an MP after Diane Abbott and Oona King - has called on Scotland Yard commissioner Cressida Dick to resign for failing to stamp out racism.

Her footage shows a uniformed constable standing outside her car, while a female officer's voice is heard off camera.

'And it's irritating because you cannot drive around on a Sunday afternoon whilst black because you're going to be stopped by the police.'

Speaking to Sky News, she said: 'The institution is racist. One of the other police officers came and said 'I can't see what's in the back of your car'.

The MP said: 'I wasn't going to go live with this at all, but because the other police officer inflamed the situation so much, I was getting irritated and angry at the way she was approaching me.

'It's such a bad way to treat people. It's exhausting, and tiring and mentally draining.

'This is a police service that is supposed to police everyone, and I understand there are issues that need to be dealt with.

'But deal with it in an equitable way, don't deal with in an unfair way, in a bias way or a racist way.'

Scotland Yard explained the car was stopped because an officer 'incorrectly entered' its registration into a police occupier and identified it as a vehicle registered to an address in Yorkshire.

'Upon stopping the vehicle and speaking with the driver, it quickly became apparent that the registration had been entered incorrectly and was registered to the driver in London,' a statement said.

'Once the mistake was realised the officer sought to explain this to the occupants; they were then allowed on their way.'

The statement did not explain why the registration was entered in the first place.

After the stop, former shadow home secretary Diane Abbott said: 'This is so unsurprising. When will the Metropolitan Police give up on racial profiling?'

Labour leader Keir Starmer added: 'I reached out yesterday to Dawn Butler to discuss the incidence she reported and to offer our support. All allegations of racial profiling must be taken extremely seriously by the Metropolitan police.

'It is imperative that the Black community have trust and confidence in our police. The abuse Dawn has received over social media is wrong and must be condemned.'

Ms Butler, who served as Jeremy Corbyn's shadow minister for women and equalities, yesterday hit out at Metropolitan Police officers who rubbished the notion children should be invulnerable to arrest.

In a scathing rebuke, she tweeted: 'The problem is you are arresting children going for a bike ride or going to the shops for a loaf of bread.

'Not all African-Caribbean boys should be viewed as criminals! I should be surprised the police liked this but sadly I'm not.'

And in an article published yesterday, she called on Scotland Yard Commissioner Cressida Dick to resign for failing to stamp out 'institutional racism' within her ranks.

She wrote in Metro: 'In case anyone doubts the experiences of people of colour, the statistics are stark.

'The Met are four times more likely to use force on Black people. They have stopped and searched the equivalent of one in four young black men in London during lockdown.'

She added: 'At this most pivotal time the commissioner thought it appropriate to say that 'institutionally racist' is not a 'useful way to describe' the force, which is not only unhelpful but offensive.

'It is quite telling. Cressida Dick appears to be incapable of tackling this long-known problem, and incapable of showing solidarity with those people who suffer from it the most, so she should resign.'

The Metropolitan Police said it is looking into the episode and Ms Butler could not be reached.

Ms Butler was named by Vogue magazine as one of the 25 most influential women shaping 2020 for her support of Black Lives Matter protests.

She described her backing of the Marxist anti-racism movement as having led to threats of attack on her office and staff having 'drastically escalated'.

Last month Great Britain sprinter Bianca Williams and her partner Ricardo dos Santos were pulled from their car and handcuffed in front of their three-month-old son.

Nothing was found in the search and the Met referred itself to the police watchdog while Cressida Dick was forced to apologise for the 'distress' caused.

The Independent Office for Police Conduct has launched an investigation into whether officers in England and Wales racially discriminate against ethnic minority people.

The latest official statistics for stop and search showed a disparity rate of 4.3 for all black, Asian and minority ethnic people and 9.7 for black people.