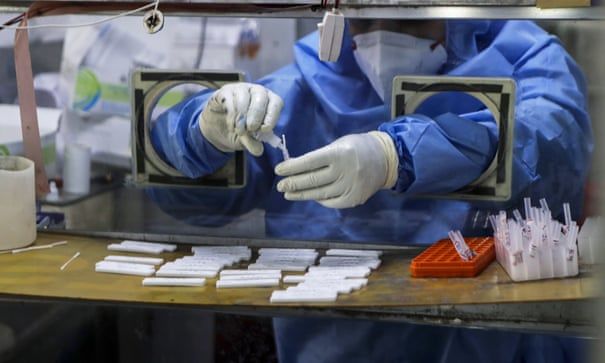 Covid variant first detected in India is found in the UK

In total, 77 cases of the variant, known as B.1.617, have been recorded in the UK up to 14 April, according to the latest update from Public Health England (PHE), released on Thursday. Of these, 73 were recorded in England and four in Scotland.

It was the first time PHE had reported the variant in the UK.

It currently has the label “variant under investigation”. If worries about it are borne out, for example if it appears to be more infectious or more resistant to the body’s immune response, then it may be designated a “variant of concern”.

The UK has a handful of “variants of concern”, including ones first detected in Kent, South Africa and Brazil.

These variants contain a different overall set of mutations, although there are some overlaps. For example all three have a mutation called N501Y, which is believed to make the virus more infectious, while the Brazil and South Africa variants both have a mutation called 484K, which is believed to help the virus at least partially evade the body’s immune responses towards coronavirus – including those produced by some Covid vaccines. This mutation later cropped up in the Kent variant, giving rise to a new variant of concern.

The B.1.617 variant was first detected in India, but has since been found elsewhere, including California. It has worried experts as it contains two mutations in the spike protein that, it has been suggested, may boost its ability to escape the body’s immune responses. It is thought the variant may also be able to infect the body more easily.

Prof Paul Hunter, professor in medicine at the University of East Anglia, said the arrival of the India variant was potentially worrying.

However, more research is needed to explore the role of these mutations and the impact they might have.

News of the arrival of the India variant in the UK came as surge testing was expanded in London in an attempt to control the spread of coronavirus variants, with parts of Hillingdon, as well as certain postcodes in Lambeth, Wandsworth, Southwark and Barnet all having testing and contact tracing ramped up. Sandwell council in the West Midlands has also announced it will undertake surge testing.

India is experiencing a devastating wave of coronavirus, although it is not clear whether the B.1.617 variant is helping to fuel the surge. Boris Johnson is expected to travel to India later this month, although his trip has been curtailed as a result of the infections there.

Prof Christina Pagel, director of the Clinical Operational Research Unit at University College London and a member of the Independent Sage group of experts, said the discovery of the variant in the UK was worrying, and tweeted that Johnson should not head to Delhi.

“We don’t know yet whether it can escape existing vaccines but it has several concerning mutations,” she told the Guardian. “It is ridiculous that India is not on the travel red list yet – or many other countries for that matter – when India is seeing 200,000 new cases every day at the moment.”
#Boris Johnson  #Coronavirus  #Vaccines  #Johnson  #vaccine  #Covid
Add Comment