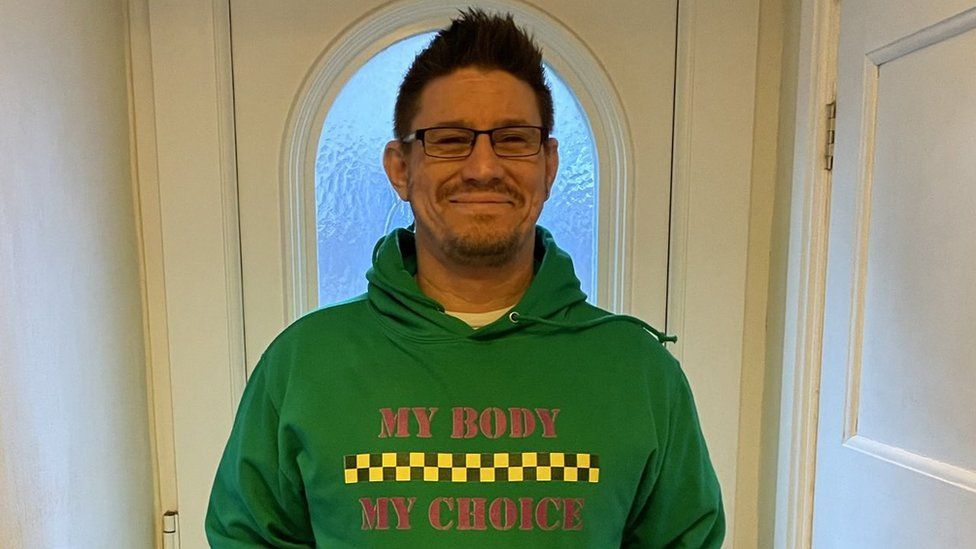 Matt Taylor is a specialist paramedic who has worked through the pandemic treating elderly and vulnerable people in their homes. He hasn't had a Covid-19 vaccination and says he's prepared to lose his job over it.

He's one of around 80,000 unvaccinated NHS staff in England being told if they work with patients and don't get a jab by next week they could be moved to a different role or even sacked.

"There's nothing that says 'thank you' more than an email three days before Christmas telling you that if you don't do what they tell you to do you're not going to have a job," he says.

Under the government's current rules, NHS England staff must have a first jab by 3 February to allow time to be fully vaccinated by 1 April to continue in frontline roles.

Health Secretary Sajid Javid has said the policy is "under review". Pressed on whether that meant the government was considering scrapping the plan he added: "We're reflecting on it because we do have to accept that the virus has changed."

But he said it was still "absolutely right" that health and social care staff "carry out their professional duty, which is to do all that they can to put patient safety first, and that means getting vaccinated."

Mr Taylor, 42, works in primary care in Cumbria and says he feels like NHS staff are being used as political pawns.

"The government says as healthcare workers we should want to protect our patients by getting vaccinated.

"But you can argue that it won't protect them any more whether I have it or not. We all know people who are triple jabbed and they've still got Covid or they've not been jabbed and they haven't got it.

"It's not like the vaccine has eradicated Covid like some vaccines have done in the past so I find the argument for the science a bit weak."

The UK Health Security Agency says vaccines significantly reduce the risk of getting seriously ill or dying from Covid-19, and help cut the risk of catching or spreading the virus.

Dr Nikki Kanani, medical director of primary care for NHS England, says health care professionals have "a duty" to make sure they are protected.

The Department for Health and Social Care said there were no plans to delay the deadline and it was "the right thing to do to protect patients".

Anne-Marie Chappell is an NHS administrator working with school nurses and health visitors in Lancashire.

"I am not patient facing, but if I were, I would be willing to lose my job on principle," she says.

"Nursing staff and doctors have been taught throughout their careers not to force medical treatments on patients who don't want them," she adds, but she feels "the government is now trying to shame them into accepting" a jab she believes is still experimental.

Ms Chappell says she is concerned about the impact the mandate could have on workers' mental health and the way they feel about working for the NHS.

"There will be people who don't want to have the vaccine but their partner might want them to because they are worried about how they will manage if they lose their job," she says. "It's putting relationships, families, homes under pressure - there will be people whose families are split up over this." 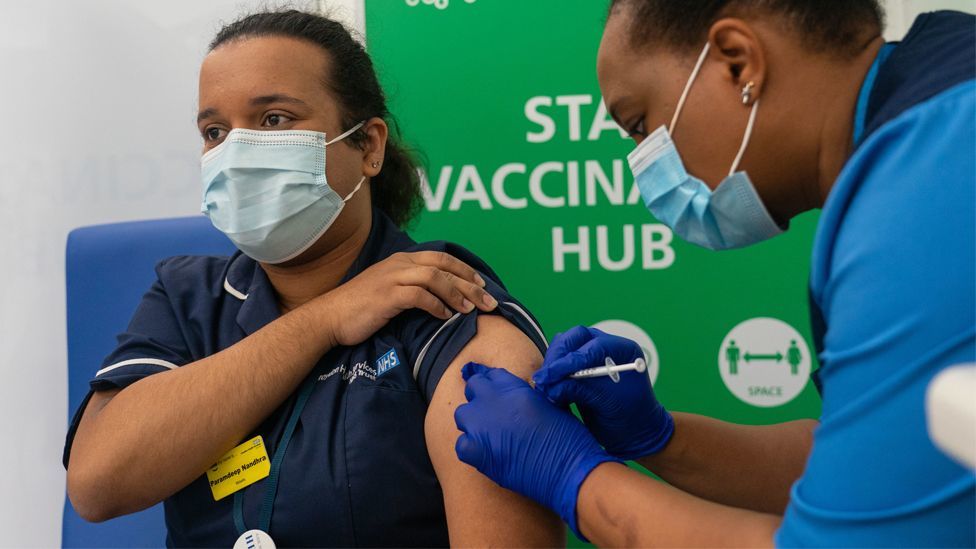 Psychotherapist Anna says she feels stressed and pressured by NHS emails, meetings and webinars encouraging her to get a Covid jab.

"I feel like I don't even get a moment to breathe without being softly interrogated, by staff I may or may not even know," she says. "I am thinking about taking it. I have no intention to resign or change my job. I just want to do it in my own time."

She is the only unvaccinated member of her team, but Anna says she does not consider herself to be "an anti-vaxxer" as she has had other jabs.

The NHS worker from London has had several meetings with her boss about the mandatory vaccination deadline.

"I was asked if I'd had a conversation with my family yet, had I booked an appointment yet. It felt like incessant coaching or surveillance on whether or not I'll be vaccinated.

"I feel they [the NHS] want me to say as soon as possible that I'm not getting it, so they can start thinking of how to fire me."

Some 5.1% of staff had not received any vaccine as of 23 January - the equivalent of 77,591 people, although not all will be in frontline jobs.

The DHSC's impact assessment warns 73,000 NHS staff in England could be lost due to the government's mandatory vaccination policy.

Pat Cullen, chief executive of the Royal College of Nursing, is calling for a delay to the 3 February deadline. She said: "To dismiss valued nursing staff during this crisis would be an act of self-sabotage."

Scotland and Wales have not made any proposals to make Covid jabs compulsory for NHS workers or care home staff. Northern Ireland will hold a public consultation. 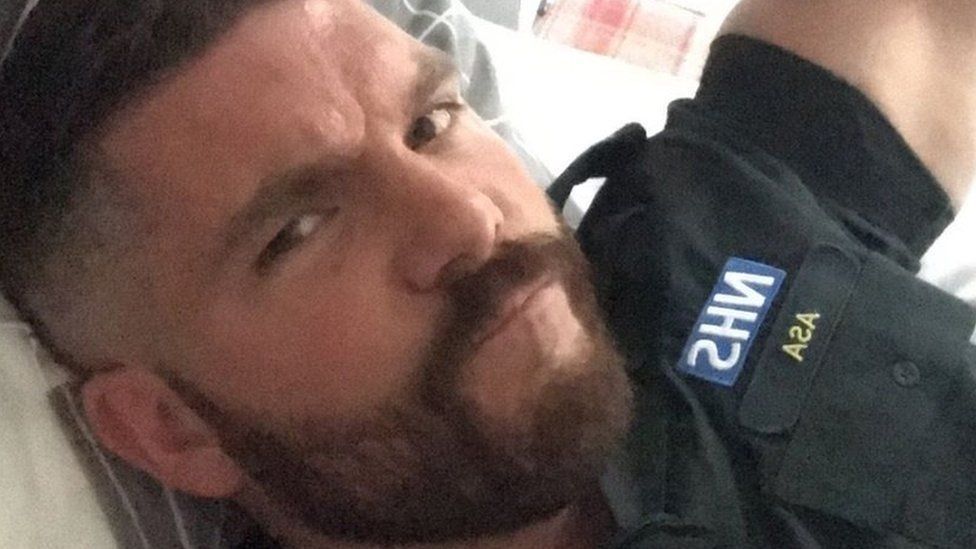 Asa Granger is a paramedic for South East Coast Ambulance Service who says he has also received an email about the mandatory vaccination deadline.

"They've put unless you're exempt for clinical reasons if you haven't had your first jab by 3 February you'll be redeployed or lose your job."

Mr Granger says there are six to 10 staff at his ambulance station in the same situation. "I cannot treat any one of my patients without their consent, yet they're asking me to get vaccinated against my will," he says.

"Back in 2020 we were all being clapped and come 2022 they're saying we are sacking you, it's an absolute disgrace."

The 35-year-old says: "I'm relatively young, fit and well. There have been lots of adverse effects linked to the vaccine. If I don't take the vaccine I'm 100% safe from the side-effects. I'm pretty happy with those odds."

Research has found side-effects from the vaccines are rare. Last year, feedback from about 40,000 people found about one in three reported some side-effects. None were serious and a common one was some soreness around the injection site.

Dr June Raine, the chief executive of the Medicines and Healthcare products Regulatory Agency (MHRA), says the benefits of vaccination continue to outweigh the risks for the "vast majority of people".

Mr Granger says he is holding out hope that the government will scrap the mandatory vaccination policy but does not know what he will do if it doesn't.

"I have a wife and young baby," he says. "A colleague has said he's done it under duress because he has a family to support. I'm not judging people who have a vaccine, it's their choice but I'm not being given a choice."