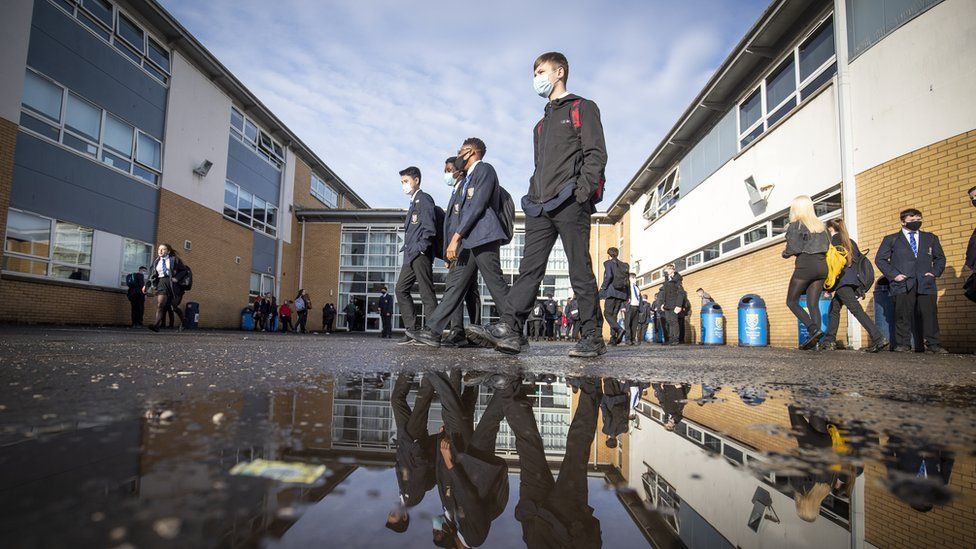 Schools are not "drivers" or "hubs" of Covid infection, Public Health England's medical director has said.

Dr Yvonne Doyle said she understood parents' nervousness about schools returning after the summer in England, Wales and Northern Ireland.

She stressed that lots of measures to cut Covid spread remained in place.

But Prof Calum Semple, a government scientific adviser, said with most adults vaccinated, schools were likely to be a "greater part of the problem".

Some have suggested a surge in cases in Scotland, where pupils returned in August, could be linked to schools.

Fewer measures are in place in schools than during last term, with bubbles and masks no longer in use in England and Wales, while Northern Ireland has also scrapped social distancing requirements.

Education Secretary Gavin Williamson told BBC Breakfast it was right for children to have a "much more normal education experience", with adults being able to go back to the pub, music festivals and theatres.

He said there needed to be a "sensible balance" and that was why mass testing of secondary school pupils was taking place.

Dr Doyle said there were lots of regimes in place already to prevent the spread, including extra cleaning, advice on ventilation and testing.

She said: "We understand, and I understand fully, that parents may be nervous but I would stress again that schools are not the drivers and not the hubs of infection."

She added that PHE attributed some of the school-related coronavirus figures to the testing regime.

Prof Semple, professor of child health and outbreak medicine at the University of Liverpool, said he believed schools should stay open "nearly at all costs" because the damage caused by a lack of education could be lifelong.

He said while pupils were unlikely to get sick themselves they could transmit the disease to others, and that this should be considered when discussing vaccines for 12 to 15-year-olds.

A paper, published by the Royal Society, suggests the reopening of schools, and particularly secondary schools, is associated with an increased risk of transmission both among school-aged pupils and in the wider community. But it said the scale of that increase depended on control measures in the classroom and community as well as compliance with mass testing.

Prof Semple said his biggest worry was closing schools again because education was very important but he said school building stock was poor, with ventilation an issue.

Both experts agreed that school is the best place for children.

But vaccinating everyone else means that they'll look more like "hubs" than they did last year.

If your problems get smaller and mine stay the same, I start to look worse than you.

This year, they'll be able to get vaccinated. Their place as "leaders" in infection rates and rises is likely to be taken by children because everyone else will have the vaccine to slow the spread.

The decision about vaccination for under-16s is finely balanced because the risks of illness for children from Covid are so low.

Parents have to balance the risks of Covid with the risks of disruption to education. Health experts currently appear more worried about missing education.

Scientists have already said it is "highly likely" that high levels of coronavirus will be seen in schools by the end of September.

And there could be consequences for parents and carers, they say - but it remains to be seen what effect it will have on cases and hospital admissions.

Imperial College epidemiologist Prof Neil Ferguson said the UK could expect cases to surge in step with what has happened in Scotland when schools return but the big unknown was how long that surge would last.

He said that in a post-vaccine world the country could cope with much higher levels of cases and what ministers might consider an "acceptable level of hospitalisation" but he said that daily caseloads of 100,000 to 150,000 would put "significant demands on the healthcare system".

Among the measures being implemented for safety in schools in England are carbon dioxide monitors to help improve ventilation, with 300,000 being made available, but when asked on BBC Breakfast Mr Williamson was unable to say how many were already in place.

While CO2 monitors do not affect the transmission risk in schools, they can help to indicate how well ventilated a classroom is.

Humans breathe out a higher concentration of carbon dioxide than is present in the atmosphere, so the monitors help to detect how much of the surrounding air has been breathed out, and how much is fresh air from outside.

Asked about vaccinations for 12 to 15-year-olds the education secretary said parents would find it "deeply reassuring to have a choice of whether their children should have a vaccination or not" and that he was "very keen" to hear the decision from the Joint Committee on Vaccination and Immunisation (JCVI).

He said that government was "ready to go" if it did decide to extend the eligibility to children that age.

Prof Anthony Harnden, deputy chairman of the JCVI, said there were many arguments for and against vaccinating the age group but said whatever decision the committee reached would be in children's best interests.

Prof Semple, who sits on the Scientific Advisory Group for Emergencies (Sage), said it was a "really difficult judgement" with a fine balancing act between a "rare side effect", in myocarditis, and the low risk from Covid to children themselves and the impact of transmission on wider society.