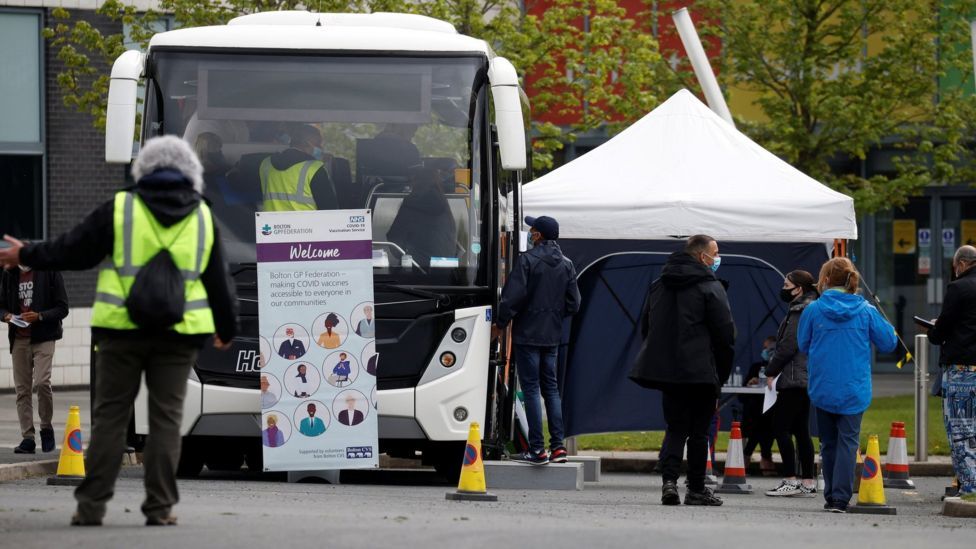 Covid: Plea to get the jab in variant hotspot areas

People eligible for a vaccine in areas where the Indian virus variant is spreading are being urged to get the jab.

Health minister Edward Argar said there had been a "minor increase" in hospital presentations in Bolton, mainly among unvaccinated 35-65 year olds.

The Army is to be deployed in the Greater Manchester town and Blackburn with Darwen to help with mass testing.

Cases of the Indian variant have nearly tripled in the past week, data shows.

Surge testing is taking place in targeted areas across England where virus variants have been found, including postcodes within several London boroughs, Sefton, Worcestershire, and Nottingham.

Prof Anthony Harnden, who advises the government on vaccinations, said there were still "lots of unvaccinated people in at-risk groups in these areas".

He told BBC Radio 4's Today programme: "The worry is that those unvaccinated vulnerable individuals, those over-50, unvaccinated, will develop Covid from this more transmissible [variant] and end up in hospital."

It comes as, according to Saturday's government figures, a further seven people have died in the UK within 28 days of a positive test and another 2,027 coronavirus cases have been recorded.

Meanwhile, Scotland's First Minister Nicola Sturgeon said initial research suggested an outbreak in the south side of Glasgow was being driven by the Indian variant - as she delayed the easing of restrictions there and in Moray.

"That's why we're imploring [local authorities] to get out there and vaccinate their unvaccinated people," he added.

Second doses will also be speeded-up for older age groups in affected areas - in a move described by Prof Harnden as providing "better short-term protection" in an "urgent situation".

Dr Helen Wall, who is leading the vaccination effort in Bolton, said the target for Saturday was to distribute 4,000 jabs.

She said 10,000 people eligible for jabs had yet to be vaccinated in the BL4 and BL5 postcode areas, with issues like not having phone credit to make a booking often cited as a reason for putting off taking the vaccine.

Asked what would happen if a younger person turned up for a jab, Dr Wall said vaccinators were following the guidance but would "look for reasons to vaccinate people, not reasons not to within those criteria of eligibility".

It comes after Prime Minister Boris Johnson warned the new variant - first discovered in India - could affect the timing of the last step in England's roadmap out of lockdown from 21 June.

Mr Johnson said he did not believe that the "present evidence" showed a need to delay the next stage in the easing of lockdown in England on Monday.

But on Saturday, the British Medical Association said it had serious concerns about the decision to continue with the easing of lockdown restrictions in England on Monday.

"It is a real worry that when further measures lift on 17 May, the majority of younger people, who are often highly socially mobile and could therefore be most at risk of a more infectious strain, are not yet vaccinated," said Dr Richard Jarvis from the BMA.

Once again, the government is being forced to draw up an assessment of risk, with only partial epidemiological data, but where the economic and social costs of the restrictions are huge.

Its scientists fret that if - and it's a big if - the Indian variant continues to spread much more quickly than others, the picture could soon look bleak.

Ever since the publication of the plan for easing restrictions in England in February, the prime minister's language has been peppered with references to it being "cautious but irreversible".

That allows for a slowing down, or even a halt to unlocking. But not going backwards.

To slam on the breaks now, postponing Monday's unlocking, would have been a big moment.

To go into reverse, if the data is dire in the coming weeks, would be bigger.

On several occasions last year, the government made promises about the return of normal life - or elements of it - which circumstances later meant it was unable to keep.

It has since been much more cautious, with some critics demanding it move more quickly - pressure it has resisted.

Only data in the coming weeks will determine conclusively if the decision to press ahead with reopening on Monday was, on balance, wise.

Mr Argar told BBC Breakfast the government was acting "coolly" and "calmly" in response to new research on the potential increased transmissibility of the Indian variant but "keeping everything under review".

He said: "All the evidence so far suggests there is no evidence of increased severity of illness or that it evades the vaccine."

Mr Argar admitted some arrivals from India may have used public transport to travel home from the airport in the days before the country was placed onto the UK's travel red list on 23 April.

He told Today: "I do think we have the right border controls in place to do everything we can to minimise the risk of, not just this variant, but other variants in the future."

There will be an acceleration of the vaccine rollout in Bolton, including longer opening hours at vaccination centres.

More doses have been delivered to the town, which has also set up a vaccine bus to increase uptake among those who are eligible under national guidelines.

The previous up to 12 week gap between first and second doses will be cut to just eight weeks in hotspot areas for the over-50s and people who are vulnerable.

Extra clinics will open in Blackburn and Darwen in Lancashire from next week and the vaccination capacity of local pharmacies will also be increased.

Currently, England's vaccination rollout is open to healthy people over the age of 38, as well as adults with underlying conditions, and health and social care workers.

Mobile testing units have been set up in Bolton, PHE said, and door-to-door PCR testing had been offered to 22,000 residents. A PCR test is the most accurate way to check for Covid.

A rapid response team of 100 nurses, public health advisers and environmental health officers has also been sent in. 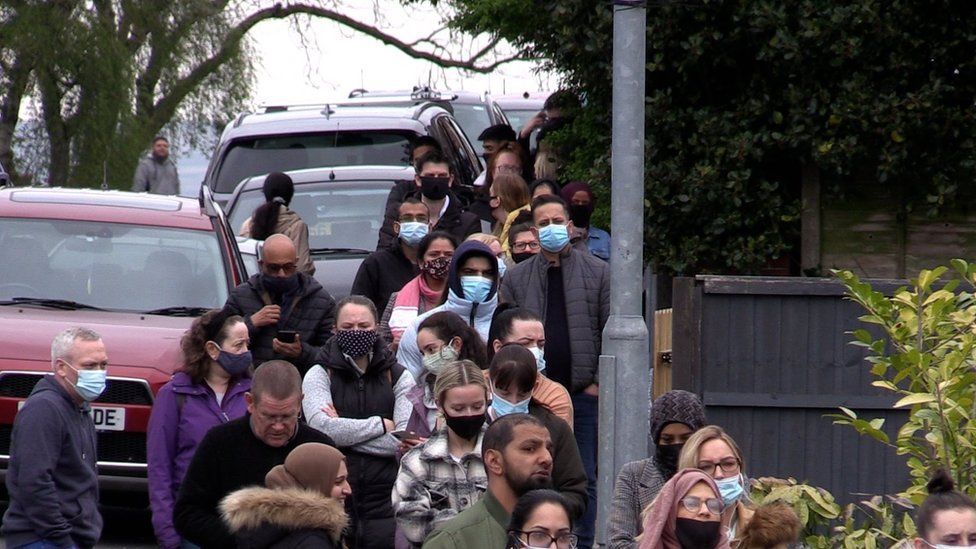 The Scientific Advisory Group for Emergencies (Sage) has said there is a "realistic possibility" that the Indian variant could be as much as "50% more transmissible" than the Kent strain.

Minutes from a Sage meeting held on Thursday said that - if the Indian variant were to be 40-50% more transmissible - proceeding to step three of England's roadmap on Monday would likely "lead to a substantial resurgence of hospitalisations (similar to, or larger than, previous peaks)".

Cases of the Indian variant found in the UK to date have nearly tripled in the past week to 1,313, Public Health England (PHE) said.

It said four people have now died with the Indian variant of concern as of 12 May.