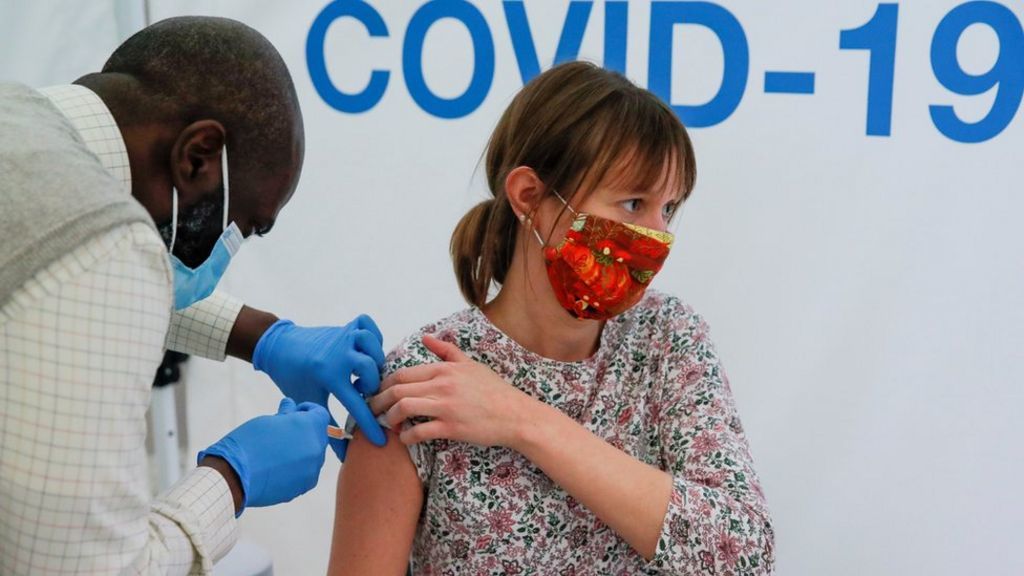 Covid: People 45 or over in England invited to book vaccine

People aged 45 or over in England will now be invited to get a Covid jab, Health Secretary Matt Hancock has said.

The vaccination programme would then move on to everyone aged 40 or over "in line with supplies", he added.

Appointments can be made on the NHS booking website, which temporarily crashed on Tuesday morning when it opened up to the new age group.

First Minister Nicola Sturgeon also confirmed over-45s would start to get invites in Scotland this week.

Unlike in England, appointments there will be allocated and there are no plans to introduce an online booking service.

In Northern Ireland, people aged 40-45 are eligible to get a Covid vaccine, while in some areas in Wales 40-49 year-olds are being invited.

All over-50s and those in high-risk groups in the UK have been offered a first dose of the vaccine.

*  England joined Wales and Scotland in giving out its first doses of the Moderna jab, the third vaccine administered in the UK
*  Government vaccine adviser Prof Jeremy Brown told the BBC people will eventually "have to" mix Covid jabs
*  Scotland speeded up its easing of domestic travel restrictions in light of declining case numbers
*  Johnson & Johnson confirmed it will delay the rollout of its one-dose jab in Europe, amid a pause in the US, after reports of extremely rare blood clots

The UK has bought millions of that vaccine, also known as Janssen, but the Department of Health said the delay would not affect the UK's vaccine efforts.

A further 2,472 coronavirus cases were recorded across the UK on Monday, with a further 23 deaths within 28 days of a positive test reported.

Meanwhile, Prime Minister Boris Johnson has warned that coronavirus infections and deaths will start to rise again as restrictions were eased.

He said that although the vaccination programme had helped reduce the numbers, "the bulk of the work in reducing the disease has been done by the lockdown" and he urged people to be "cautious".

However, he said he could not see any reason to change England's roadmap out of lockdown. Mr Johnson added that he was "very confident" about the UK's vaccine supplies.

Mr Hancock said the government was "on track" to offer a vaccine to everyone aged 18 or over by the end of July after meeting an earlier target for offering jabs to the most vulnerable. 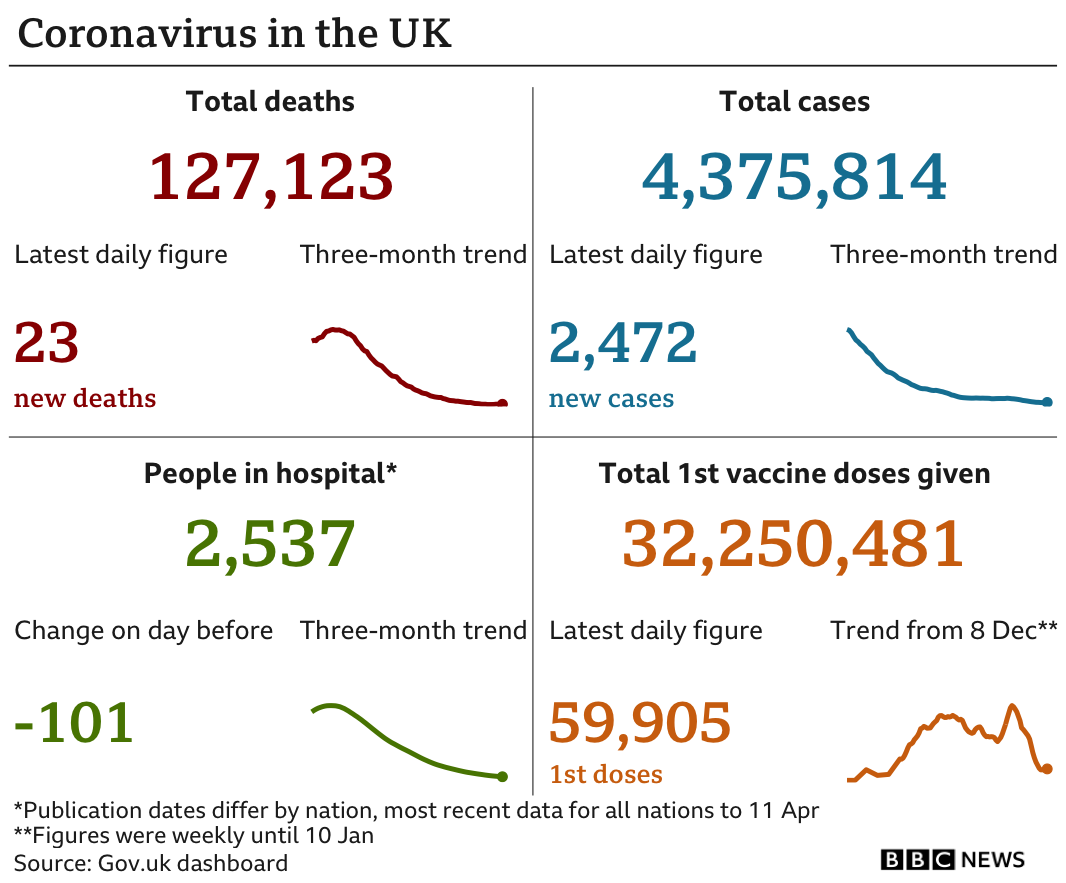 The health secretary also confirmed the rollout would descend through the age groups, based on advice from the Joint Committee of Vaccination and Immunisation (JCVI).

There are an estimated 3.7 million people in England aged 45 to 49.

'Supply is a key variable for what happens next'

Given how quickly the vaccination programme has been rolled out in the UK, hitting the target of all priority groups by mid-April is not unexpected.

And remember, there is no published data on the number of people offered jabs, as opposed to those who have actually been vaccinated. However, NHS England has made clear that across the nine groups, 95% have actually had their first doses - that is an average, with take-up rates varying in different groups.

Online bookings for the next age group, those aged 45 and over, have opened in England. Text messages to 48 and 49-year-olds from local vaccination centres are set to go out soon.

But what's not known is to what extent supplies of Pfizer and Moderna vaccines will fill the gap caused this month by supply problems with the AstraZeneca doses.

The government is sticking to the line that the programme is on track to offer every adult a first dose by late July.

But officials qualify it by saying this is "subject to supply" - and that is a key variable.

Prof Brown, a member of the JCVI, predicted there will be a "mix-and-match" for vaccines in the coming years.

He told the BBC: "It's practically going to have to be that way because, once you've completed a course of, say, the Moderna or Pfizer or the AstraZeneca with two doses, in the future it's going to be quite difficult to guarantee you get the same type of vaccine again.

"So there will be a mix-and-match occurring just by the sort of practicalities of doing a third or fourth vaccination over the next few years."

He added that trials involving mixed vaccine combinations were ongoing. 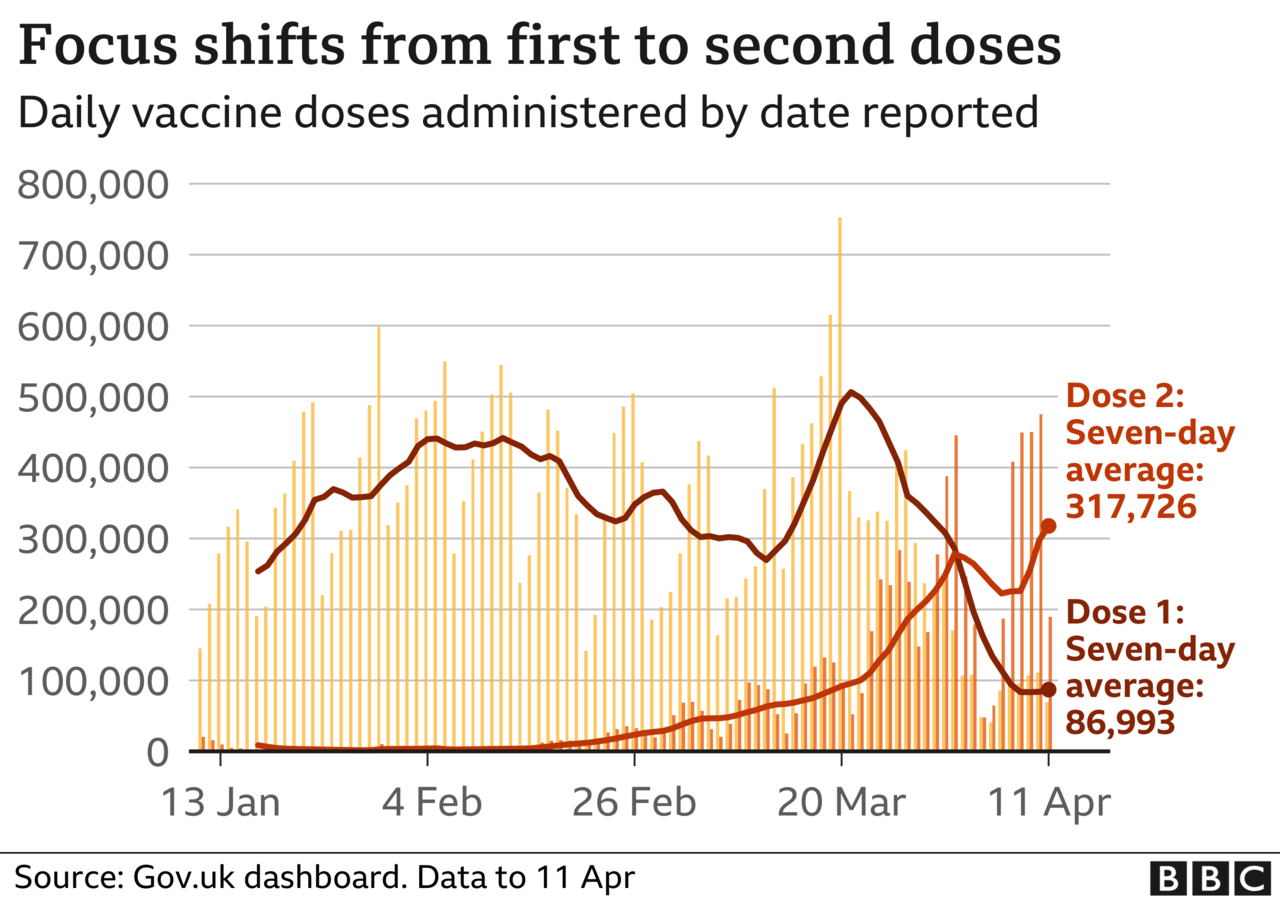 Another member of the JCVI, Prof Adam Finn, welcomed the news that the UK had completed the first phase of its vaccination programme but added: "We're only halfway up the hill."

He told the BBC: "We mustn't take our eye off the task and we've got to keep working to get to the top."

Prof Finn said people over 50 who have not been invited for a first dose of the vaccine should make a "gentle enquiry" with their GP. 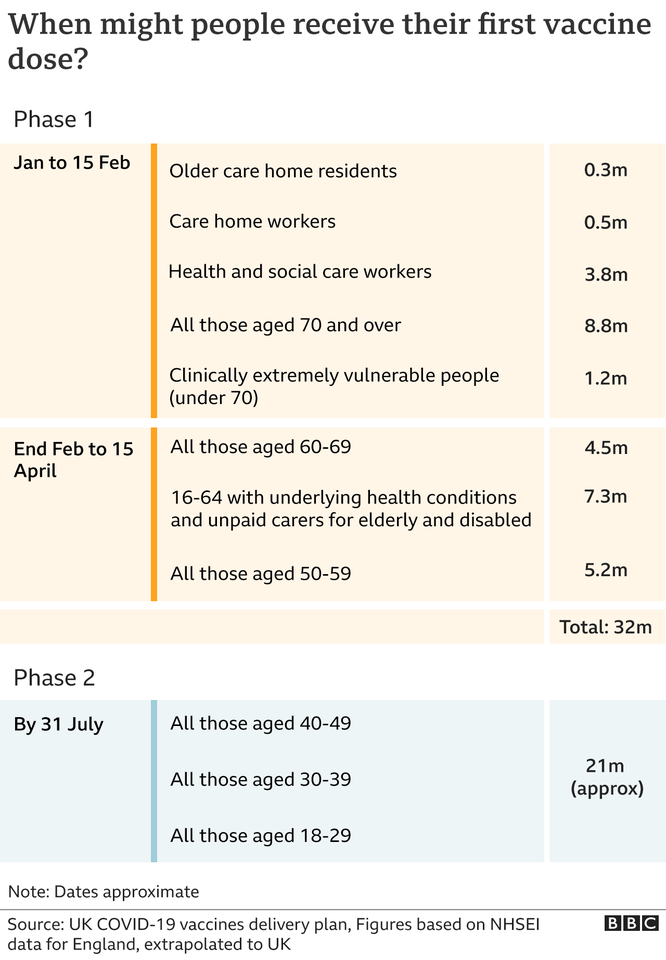 Surge testing has been implemented in the Wandsworth and Lambeth areas of south London after a cluster of the South African Covid-19 variant was found.

The BBC has seen documents that show the outbreak appears to have been triggered by an individual who travelled from an African country in February that was not on the red list for mandatory quarantine, but is now.

The government has also announced that students in England will return to university "no earlier than 17 May", with an offer of supervised Covid tests.