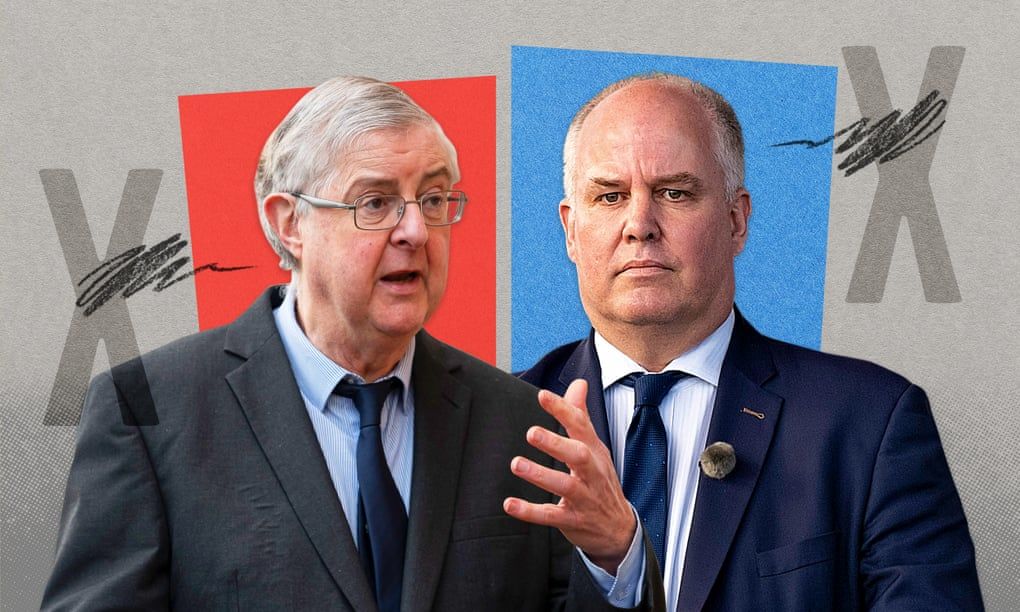 ‘Covid is a big part of this election’: Welsh Labour pushes for votes amid greater scrutiny

Pandemic has raised profile of Mark Drakeford and made more people aware of Cardiff’s policy powers.

On the beach at Barry Island in south Wales, locals and daytrippers were enjoying fish and chips and ice cream, relishing the spring sunshine on tired faces after a long hard winter of lockdowns.

Away from the jollity of the seafront, Jane Hutt, who has sat in the Welsh assembly and parliament since the first devolved election in 1999, was striding along the steep streets of terraced houses trying to secure her sixth win for Labour in the Vale of Glamorgan constituency.

Hutt, who is defending a narrow majority of 777, conceded it may turn out to be the most challenging yet.

“It feels different because of the pandemic,” she said. Covid has meant that tried and tested campaigning such as knocking on doors has been more limited – and has to be done from behind a mask. The Labour machine in Wales has only just been able to crank up.

Perhaps more importantly, the pandemic has hugely raised the profile of the devolved government and its Labour first minister, Mark Drakeford, making many more people aware of the powers Cardiff wields over policy areas such as health, education – and lockdowns. 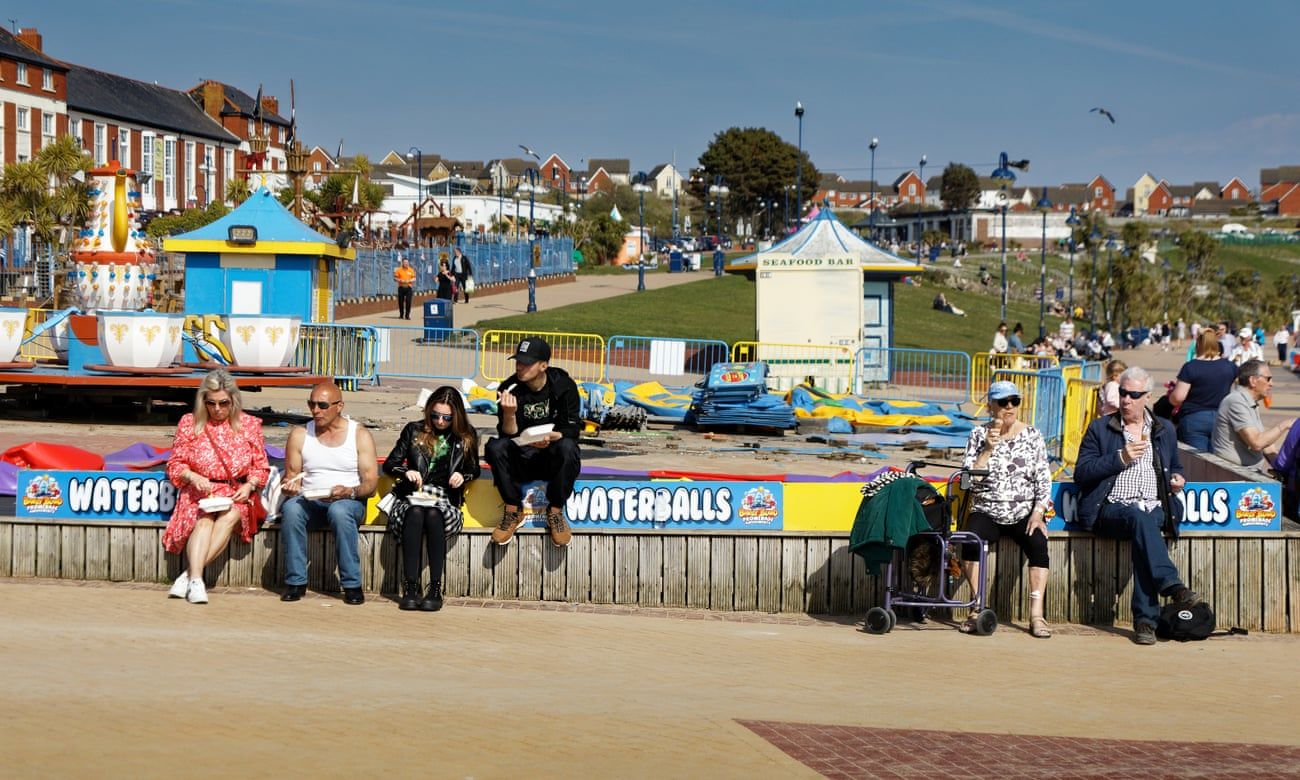 People enjoy the sunshine on the beach in Barry Island as the election campaign gathers pace.

In past elections, Welsh Labour has been able to frame itself as the party to protect Wales against the Tories in Westminster. Now more awareness of the powers Cardiff holds is leading to greater scrutiny.

“We are making difficult decisions that are directly affecting people’s lives,” said Hutt. “Who they can see, when they can go for a drink in the pub. People understand more about devolution. How we have handled Covid is certainly a big part of this election.”

Labour is promoting Drakeford as “cautious, careful, and straight-talking” and most people Hutt chatted to in Barry seemed to think he had done a decent job during the pandemic.

“He’s had the hardest job he could have imagined,” said Stuart Burnell, who runs a zero-waste shop, Awesome Wales, in the town. “He’s not made promises he can’t keep like Boris has.”

Chris Ivins, who works in a uPVC windows shop, said he felt Drakeford had been a little slow to unlock Wales. “But we understand why he’d be cautious. I’d rather have him making those decisions than those Tory crooks in Westminster.”

Not all were supportive. Darren Joseph, who works for an insurance company, chased Hutt’s team down the street and handed back a leaflet they had posted through his letterbox. “I used to vote for Labour but not after they made that communist [Jeremy] Corbyn the leader. I’m voting for the Conservatives this time.”

Labour has led the devolved administration – either alone or with support from others – since 1999. In 2016, the party won 29 of the 60 seats. The nationalists, Plaid Cymru, came in second and the Conservatives third. 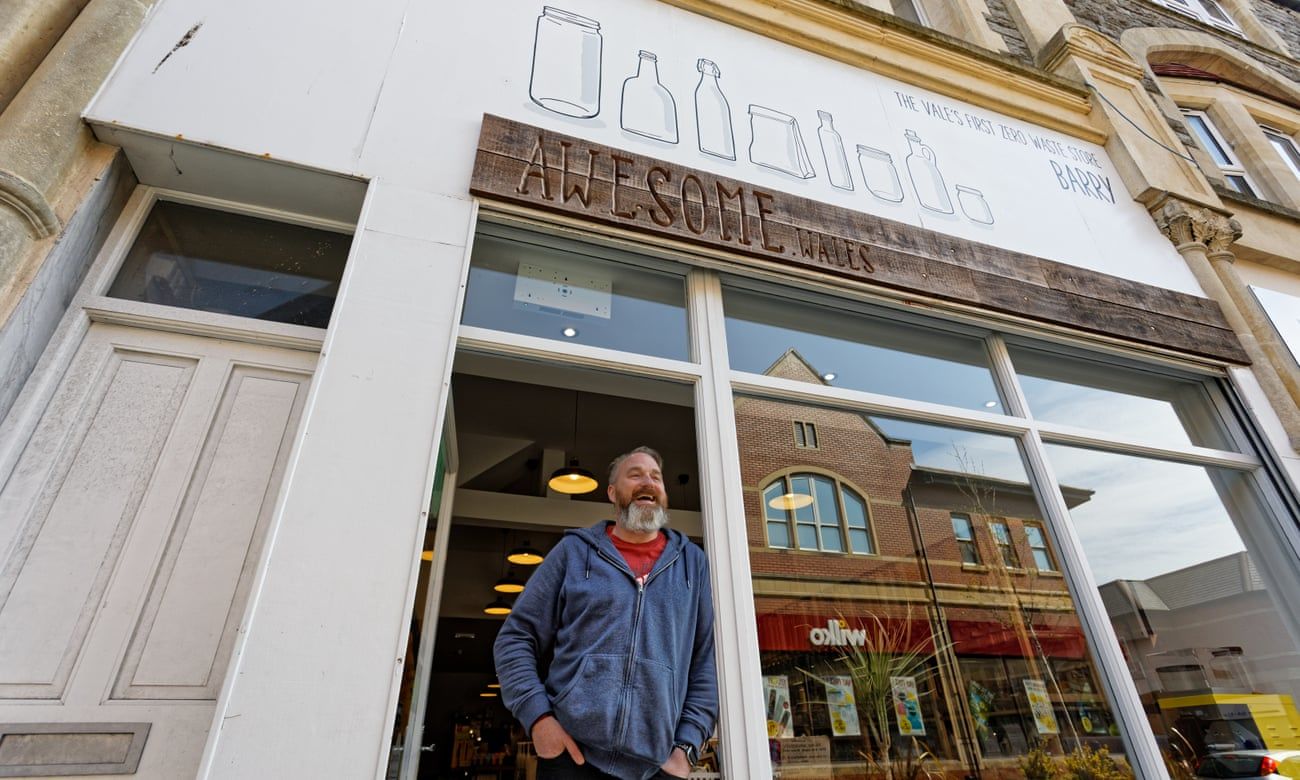 Stuart Burnell, of Awesome Wales zero-waste shop in Barry, said of Mark Drakeford: ‘He’s not made promises he can’t keep like Boris has.’

Since then there have been dramatic changes apart from Covid. At the general election in 2019, the Tories enjoyed their best results in Wales since the heyday of Margaret Thatcher, even winning in once rock-solid Labour seats such as Wrexham, which had never before returned a Tory MP.

There has also been a surge in interest in independence, with one recent poll finding that just under 40% of Welsh people who expressed an opinion said they would vote for independence. And, for the first time, those aged 16 and 17 get the vote in Wales on 6 May.

A poll by Opinium for Sky News last week suggested that Labour could win 29 seats again, followed by the Tories with 19 and Plaid 10. But a YouGov poll for ITV Wales and Cardiff University two days later put Labour back at 26 seats, Plaid 17 and the Tories 14.

The poll suggested that the Lib Dems would cling on to one seat and the Abolish the Welsh Assembly party, which is fielding more than two dozen candidates, might win two seats in the institution it wants to get rid of.

If Labour wins 29 seats it may try to run a minority government but any less makes a partnership or coalition with others, most probably Plaid, more likely.

The Plaid candidate in the Vale, solicitor and councillor Richard Grigg, said his party was focusing on trying to become the biggest group at the Senedd.

He argued that the biggest issue for the country was the lack of care the UK government showed it. “Wales has been neglected far too long. We’ve been misruled by Westminster, and Covid-19 has exposed decades of growing inequality. The only way to change that is for Wales to become an independent country making decisions for Wales.”

At the heart of Plaid’s 2021 manifesto is a pledge to hold an independence referendum in the next five years. Grigg argued that if the Scottish National party wins handsomely in its parliament elections and presses ahead with its plan for a referendum it would become untenable not to give the Welsh people the same chance. 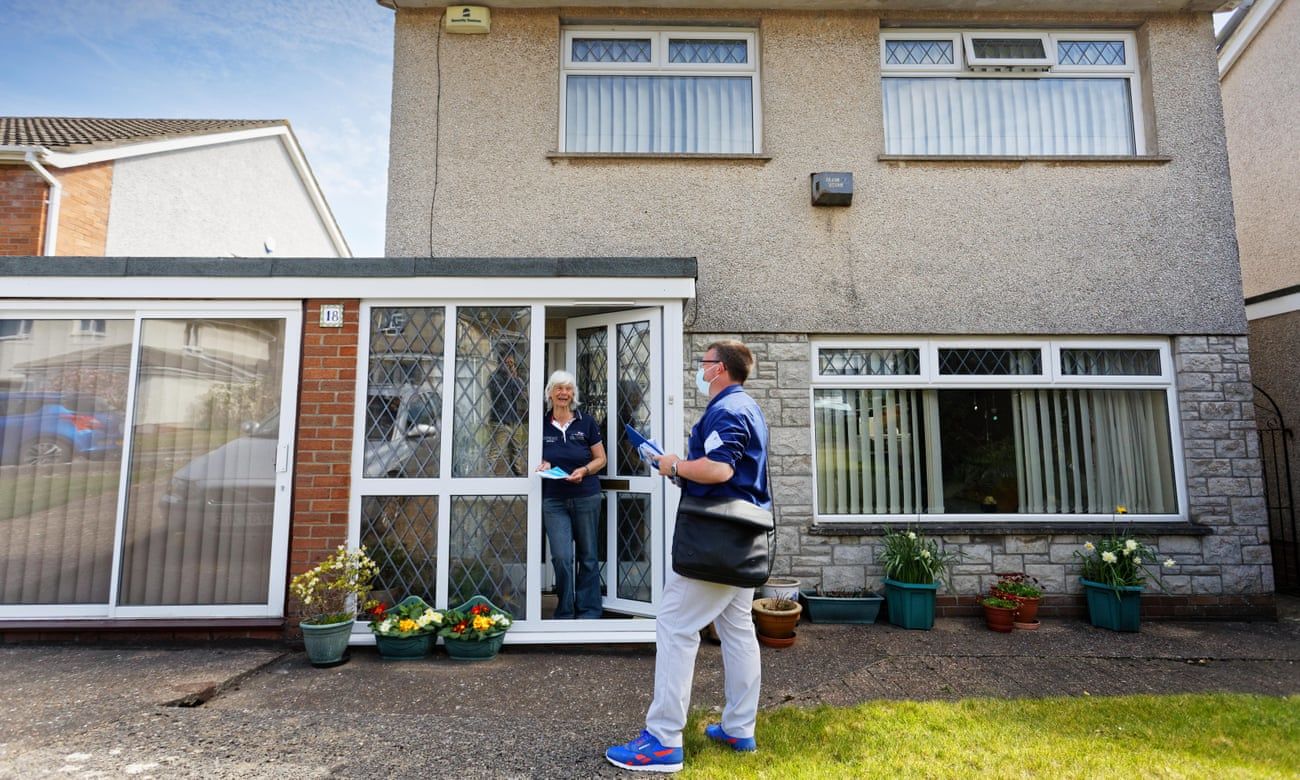 Laura McAllister, a professor at Cardiff University’s Wales Governance Centre, said she felt Plaid would want “status” in a coalition with Labour – perhaps the title of deputy or even joint first minister for its leader, Adam Price, and places in prominent ministerial offices.

There was once a thought that this would be a “British election” – a referendum on Boris Johnson and Keir Starmer.

McAllister said it was not panning out that way because the Covid crisis had so focused attention on Drakeford and the devolved administration. “I think the election is about faith and emotion,” she said. The faith is whether people believe that Labour can get us out of the pandemic and rebuild, the emotion is whether people want change and might go for Plaid or the Tories.”

Even if the Tories do well, they will almost certainly not win a majority and have no realistic route to power as neither Labour nor Plaid would work with them. 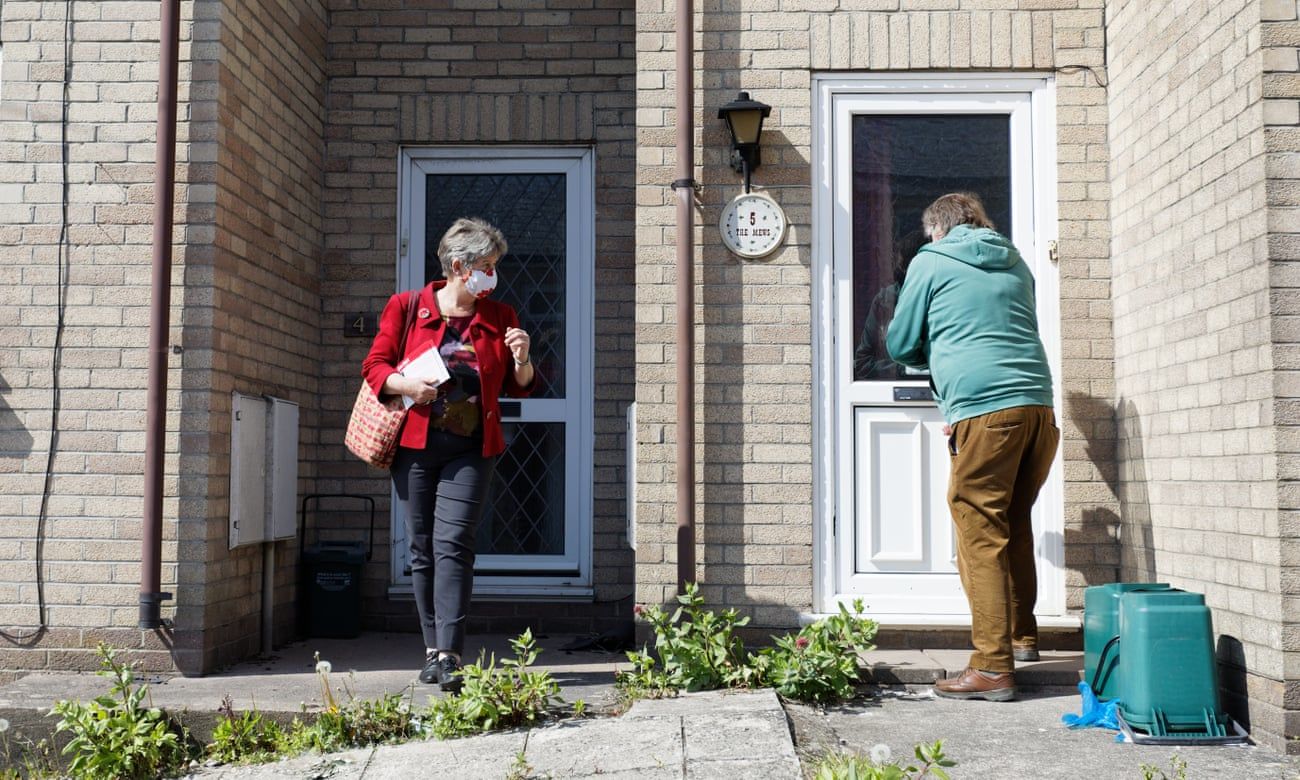 While Hutt banged on doors in Barry, the Tory candidate, Matt Smith, was canvassing in the Vale village of Wenvoe. He claimed people he met on the doorstep tended to give Johnson rather than Drakeford the credit for successes such as the vaccination campaign.

He said one of subjects most frequently brought up on the doorstep was transport infrastructure. A key Tory pledge is to build an M4 relief road in south Wales, a project that was dismissed by the Labour government in 2019 on cost and environmental grounds because the proposed route threatened a precious wetland, the Gwent Levels.

When he banged on doors, Smith emphasised he was a “fresh face”. With good reason. His predecessor, Ross England, was deselected after being accused by a crown court judge of deliberately sabotaging a rape trial.

Viv Jervis, a retired landscape worker, told him he had voted Ukip in the recent past because he wanted Brexit but would back Smith this time.

Another villager, Annette Stephens, said she thought she might vote Tory – though she, too, believed Drakeford had done a good job throughout the pandemic.

“I wouldn’t have liked to have been in his shoes,” she said.